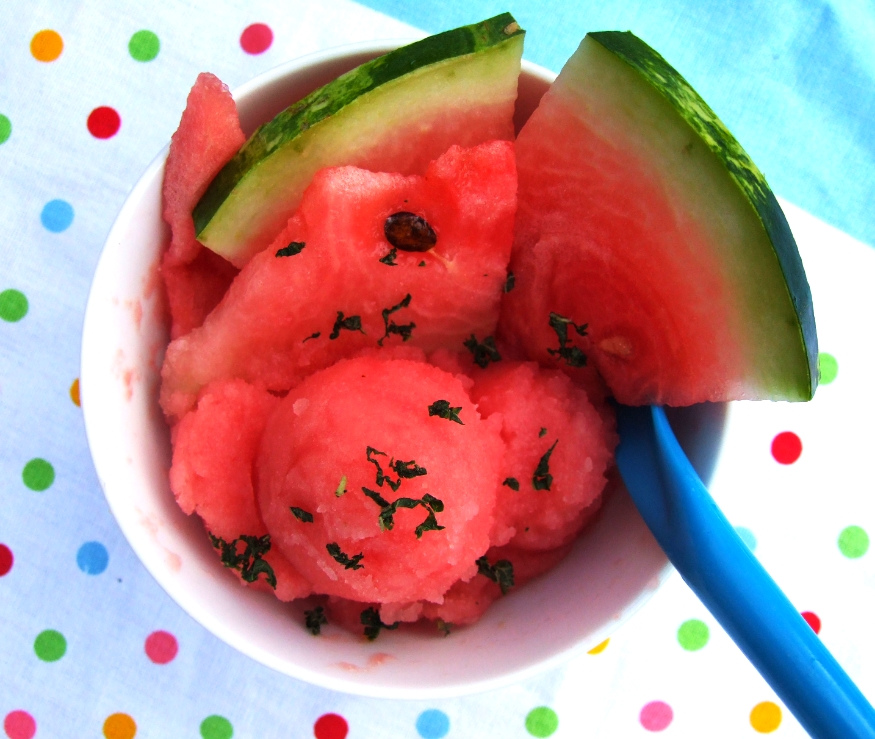 This recipe was inspired by my student days; vodka watermelons were very popular around that time and we spent days force funnelling the things until they were suitably saturated with the cheapest liquor we could find. A supermarket ‘basics’ brand or Glen’s being our budget poison of choice.

My tastes are a little more sophisticated nowadays (I said a little) and I’d like to tell you nothing but the finest went into this recipe but the truth is that the end of a bottle of Smirnoff was languishing so I used that. The vodka flavour wasn’t exactly pronounced though so my advice is as follows: get yourself a decent bottle then add a wee slosh on top of the sorbet in the bowl. Total refreshment, with a punch. Phwoar.

Cut the watermelon into wedges and remove the flesh from the skin with a knife. Chop into large slices and do your best to remove the seeds (the mixture will be passed through a sieve later so don’t worry about a few stragglers).

Put the watermelon chunks in a blender with the sugar and lime juice and blend to a liquid. Now pass it through the sieve into a bowl. Try to push as much of the melon pulp through as possible, not just the liquid. Churn the mixture in an ice cream machine until sorbet-like. Mine took about 20 minutes but my watermelon was well chilled, it could take half an hour.

To serve, let it rest out of the freezer for a good 10 to 15 minutes, otherwise it will just break up like a granita when you try and scoop it. Dribble a little vodka into the bowl and scatter on the mint, if using.