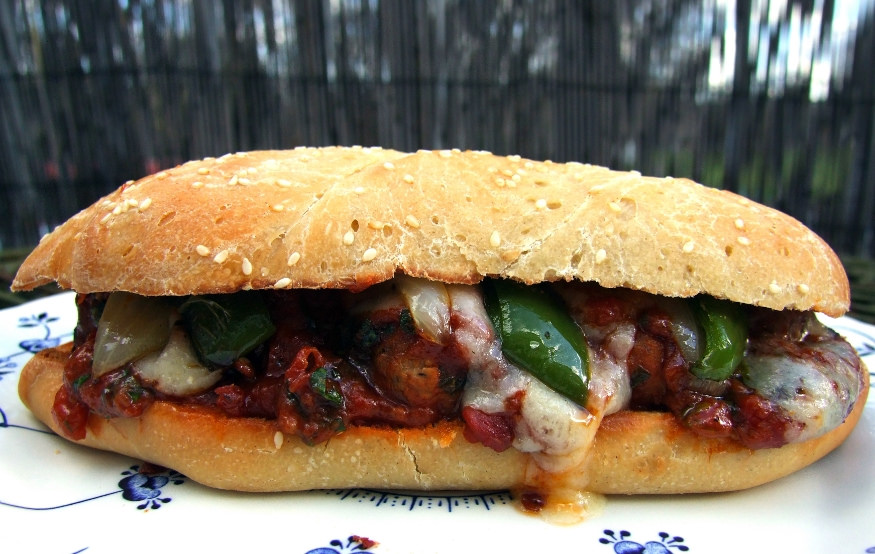 The other day I caught the episode of Friends with Joey’s sandwich – the one where a car backfires but Joey, Ross and Chandler think it’s a gunshot and Joey appears to dive across Ross in order to protect him from the bullet. Chandler is consumed with jealousy and hurt that Joey didn’t try to save him over Ross, but it later transpires that he was in fact diving to protect his precious meatball sub.

I became a little obsessed with creating a ‘proper’ marinara and found that the Italians, unsurprisingly, have very strong opinions about what should and shouldn’t go in. I knew that I wanted a rich and unctuous sauce that was slightly sweet, but the latter requirement is the source of much controversy. Some say sweetness should only be achieved by using the most perfectly ripe tomatoes, which, frankly, would pretty much rule out ever making one in this country, even in the height of summer. Tinned tomatoes were the obvious substitute but short of spending £3 on a really good quality can (or two), I was tempted to add sugar. This, it turns out, is not acceptable. Some argue that one should only ever add a cube of potato to absorb excess acidity, while others champion the sweetness of celery. Me, I cheated and used a good pinch of plain old sugar. Sorry (lies, lies).

For the meatballs, I used a mixture of half beef and half pork because I think it gives the best flavour. Breadcrumbs soaked in milk kept them nice and light, crucially important if I was to stand any chance of making a dent in such a hefty ‘wich. For the cheese, I chose Gruyère, as it’s a great melter and has a good strong, nutty flavour; I really wanted to taste the cheese in this sandwich. To counteract all that fatty richness, a topping of charred, bittersweet green pepper. Usually I can’t stand green peppers but their bite works really well here – in fact I would say they’re essential.

This is probably one of the unhealthiest sandwiches I’ve ever made, and that’s really saying something. It’s also the reason it tastes so damn good, let’s face it.

Put the bread in a small bowl and cover with the milk, allowing it to soak in, then mash to a paste with a fork. Mix the paste with all the other ingredients. Make small meatballs with the mixture, then set aside to refrigerate for half an hour at least.

When ready to cook, cover a plate with flour, then roll each meatball around in it. Fry the meatballs in oil until brown all over, then set aside to drain on kitchen paper. They don’t need to be cooked fully as they will be simmered in the sauce later.

Heat a couple of tablespoons of oil in a pan and gently fry the garlic and chilli flakes until the garlic just begins to colour. Add the wine and let it bubble up for a minute or so. Add the tomatoes, sugar, bay leaf, water/stock and some salt and pepper. Bring to the boil, then add the meatballs. Let the mixture simmer for about 30-40 minutes, or until the sauce is rich and thick. Add the fresh basil.

For the roast veg

Slice the veg into wedges, place in a roasting tin, season with salt and pepper and drizzle with oil. Mix well. Cook at 200C until soft and charred in places (about 30 mins).

Recipe here. You could of course buy some ready-made.

To assemble the subs

You will need Gruyere cheese or another cheese which melts well, to top the subs.

Make sure you do some serious exercise the next day.