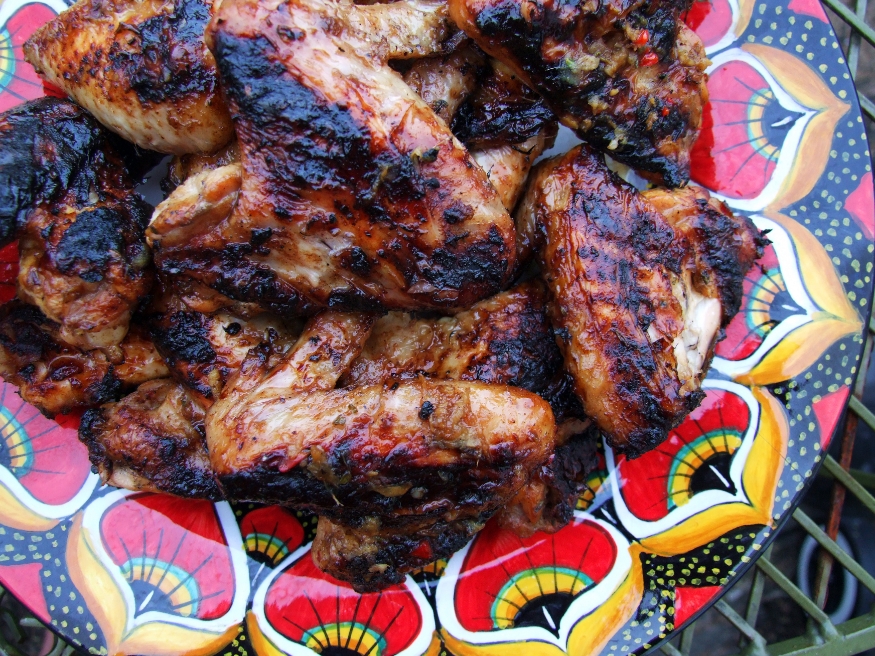 I’m always thinking about the next thing I can sling on the BBQ. This weekend I fancied flavours of the Caribbean and my thoughts, naturally, turned to RUM. I used that as a boozy base for a marinade, then added a mixture of marmalade and honey, which caramelised on the grill and gave the stickiness I was after. Lime juice provided astringency, garlic and thyme fragrance and a scotch bonnet chilli, proper heat. A hint of allspice muddled nicely with the rum.

After playing around with a few variations, I’ve arrived at this recipe which makes a rather sexy pile of wings. The depth of a pirate-sized slug of Captain Morgan, sweet fruit, lip-tingling heat. Mmmm. Wings are excellent on the BBQ as they’re cheap, have a lot of surface area to hold marinade and they cook quickly, so you can get them nice and charred outside and juicy within.

I served this with a bowl of pineapple salsa, which compliments the booze, and a large kitchen roll. Sticky…

Mix all the marinade ingredients together in a bowl, stirring until well mixed and the marmalade is no longer lumpy. Pour about 3/4 of the marinade over the wings, mix to make sure they are well coated then cover and refrigerate overnight. During the day time, try and move the wings around in the marinade a few times if you can, it helps to get them nicely coated.

Preheat your BBQ and cook the wings, turning them often and brushing regularly with the remaining 1/4 of the marinade. Do this until all the marinade is gone, the wings are sticky, charred and cooked through.