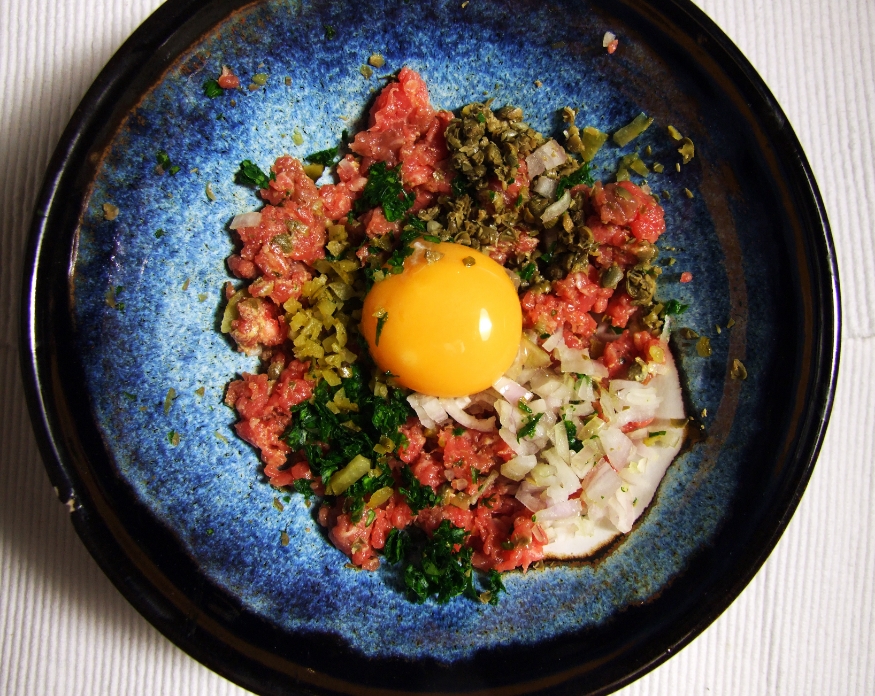 And so the year ended with one final meaty fling in the form of a birthday meal for my boyfriend. One last colon-clogging protein punch before our bodies gave in to cravings for nothing but fish, vegetables and miso soup. I expect you could hear my arteries begging me to stop from wherever you were at the time. Or maybe I really wanted to do fish but it was the 29th of December and all the fishermen were at home toasting their toes by an open fire, spending time with their families and generally having a life rather than braving the stormy seas catching fishies for my convenience.

Anyway. The fluster of festivities left me utterly unprepared and before I knew it I found myself in front of the butcher wondering, ‘what would Simon do?’ Simon Hopkinson that is. In my hour of need I turned to my king of British cooking. The pages of his ‘Week In Week Out‘, are so indelibly etched into my memory, that as I cast my eyes over the pieces of meat in front of me, I could hear him sagely whisper, “page 148,  Helen – surely you remember?” At once a stunning vision materialised: red nuggets of beef glistening against the silvery blade of a cleaver.

I used 125g lean sirloin per person (more flavour than fillet), and spiked the fine dice with whatever choice of seasonings took my fancy; chopped capers, cornichons, shallot, parsley, anchovies, Worcestershire sauce and mustard are all strong contenders. An egg yolk is essential for me, adding silky richness. Traditionally the tartare  is heaped onto toasted rye (I didn’t have any) or alongside a pile of frites (didn’t fancy making them) but thinly sliced baguette did the job just fine.

There is a curious excitement about eating entirely raw meat; it feels a little bit naughty – risky, even. Soft nuggets of melty beef are roused to life by piquancy and heat; as much as you dare. The key is not to tip the balance too far. Restraint, as always, is key.

For the main course, fish was obviously out and there was no doubt in my mind that serving a vegetarian course to the boyfriend on his birthday would be nothing short of highly offensive. I roasted a couple of partridges and served them with Simon’s bread sauce and game crumbs; bread crumbs crisped in the partridge roasting juices. Followed by cheese with beetroot chutney and a dark chocolate fudge cake, you could say it was the perfect end to a seasonal binge, and the perfect pre-cursor to a detox. To be  honest though, I’ve never really been into all that dieting malarkey and anyway, I have a feeling it might offend Simon.

Simon advises using 125g of either fillet, lean sirloin or rump. I used sirloin in place of fillet as it has so much more flavour. Chill it well then remove any fat and dice very finely, before placing in a well chilled bowl. You can now add your choice of seasonings, or if you are serving it at a dinner party or the like, just set things out on the table and let people add their own. As I said, parsley, capers, cornichons, Worcestershire sauce, mustard, anchovies, shallots and black pepper are all worthy additions. An egg yolk on top is essential in my opinion. Clearly not a dish suitable for the pregnant or vulnerable.