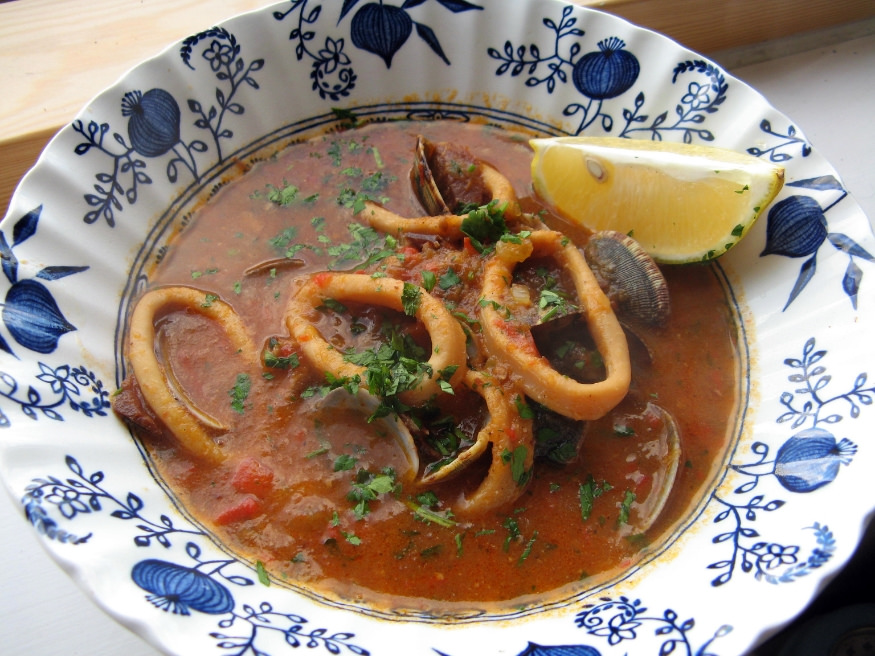 When on holiday in Spain, my mates and I bought a packet of jamon off-cuts; the stubby pieces from the end of a leg of ham which are no good for carving but better (we presumed) for slow cooked dishes, like stews. We didn’t have time to use them while there due to the sheer, greedy quantity of other food we’d bought but as they would keep well, I brought them back and made a promise to cook something at a later date. Inspiration came from a squid dish we’d eaten in a local restaurant in L’Escala – tender rings in a rich, reduced tomato sauce. I wanted to re-create it and, as ever, considered what would happen if I added some pig.

I fried the off-cuts until the fat melted then used that as a base for a tomato, red pepper and smoked paprika sauce, cooked down very slowly for 3 hours or more. It’s a weekend job, so I made a big batch and shoved some in the freezer. After that, it’s just a case of simmering the squid until tender. I also added some clams last minute because I love the combination of shellfish and pork. To finish, a picada, Catalan-style: crushed garlic, breadcrumbs and toasted ground almonds which thicken the sauce and add punch. A sprinkle of parsley, a wedge of lemon and serve. We mopped it up with torn chunks of a crusty white loaf, washed it down with Brew Dog beers and re-acquainted ourselves with the level of smugness we’d felt while on holiday.

For the base tomato sauce

Begin by skinning the tomatoes. Cover them with boiling water then wait for about 5 minutes until their skins start to split. You can then take them out and peel the skins off.

Finely chop the peppers, celery and onions (it’s worth making the effort to chop them very finely). When the tomatoes are cool enough to handle, roughly chop them. Add a couple of tablespoons of vegetable or groundnut oil to a heavy based pan then add the pork bits until the fat has melted, stirring often over a medium-low heat.

When the fat has melted, add the vegetables, smoked paprika and sugar, bring to a simmer then reduce to the lowest heat. Put the lid on and let cook very gently for 3 hours if possible.

For the rest of the stew

Make the picada by toasting the almonds in a dry pan: move them around often over a medium heat until lightly golden. Grind them to a paste in a pestle and mortar. Mix them very well with the garlic and breadcrumbs.

When the tomato sauce is ready, heat your stock and add it to the tomato sauce. Add the squid, then simmer until the squid is tender, about 40 minutes. While the squid is cooking, clean your clams by submerging them in salted water for half an hour; this is so they spit out all the grit and other stuff you don’t want to eat. Drain them and add to the sauce for a few minutes, until their shells pop open. Add a tablespoon of picada, stir it in then taste and decide if you want any more. I found a tablespoon to be enough.

Ladle the stew into bowls, then scatter the parsley over and serve with lemon wedges, and the bread.