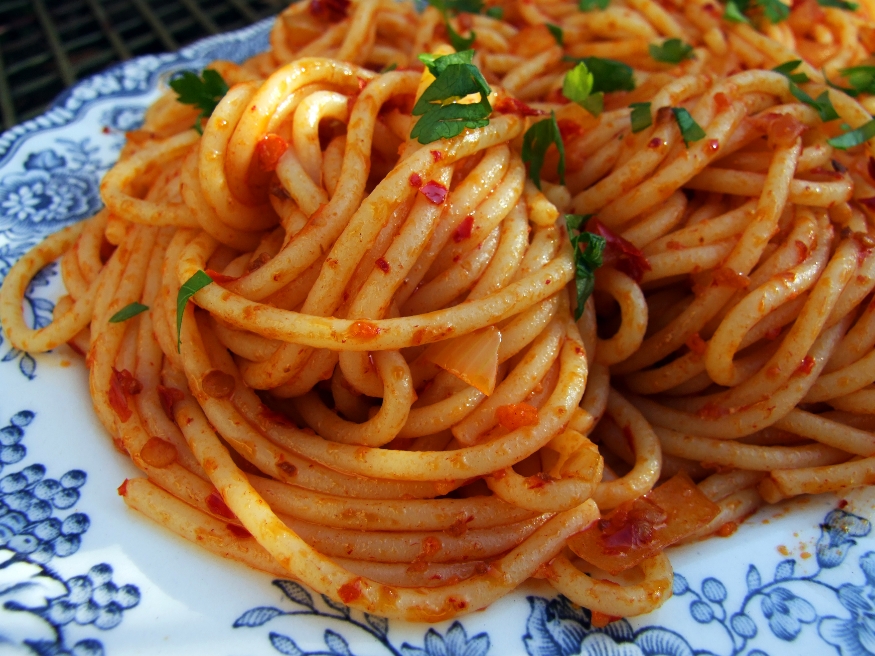 ‘Nduja is a spicy, spreadable, Calabrian sausage up there with the trendiest of ingredients. For months I’ve resisted its porky charms, the only reason being that my only other experience with a (different) spreadable sausage (at a very popular East London restaurant) ended in 3 days of food poisoning hell. The very idea of spreadable meat made me queasy, until I came across a ‘nduja stall in Borough Market last week. The giant red lobes glistened seductively in the sunlight, I approached cautiously for a taste, then promptly kicked myself for being such a wuss and missing out on what is one of the most delicious pork products I’ve tasted in a very long time.

It is made mostly from bits of the head, super-charged with outrageous quantities of fiery red Calabrian chilli pepper (at least 60% according to some websites) which gives it the most intensely savoury umami addictive quality. You can just taste the sun in the bitter-sweet intensity of those red peppers. I can’t get enough.

It’s wonderful melted and scrambled into eggs, or used as a dip for bread (as the Calabrians apparently eat it). Tim Hayward likes it with crab. My favourite way to eat it is melted into pasta sauce, with or without tomato. Its power to enrich a basic tomato pasta sauce is second to none but now I prefer it stirred into just a little onion and butter; the sausage melts away to a hundred flecks of scarlet pepper swirling in heavenly porcine oil. Mixed through spaghetti, with just a squeeze of lemon, this may be one of the most perfect pasta sauces of all time.

(some people say this amount of pasta should serve 2 people; I can eat the lot no problem)

200g spaghetti
1 generous heaped tablespoon nduja sausage (it will keep for months in the fridge, too)
Half a small white onion, finely chopped
A knob of butter
A squeeze of lemon juice
A few leaves of parsley, chopped
Salt and pepper

Cook the spaghetti in plenty of boiling salted water. Meanwhile, melt the butter and soften the onions it. When they are translucent, melt in the nduja. Add a squeeze of lemon and some salt and pepper.

When the spaghetti is cooked, spoon 2 tablespoons of the cooking water into the sauce, then drain the pasta. Mix the sauce with the spaghetti and serve, scattered with the parsley.

Rigatoni with Kale, Walnuts and Halloumi