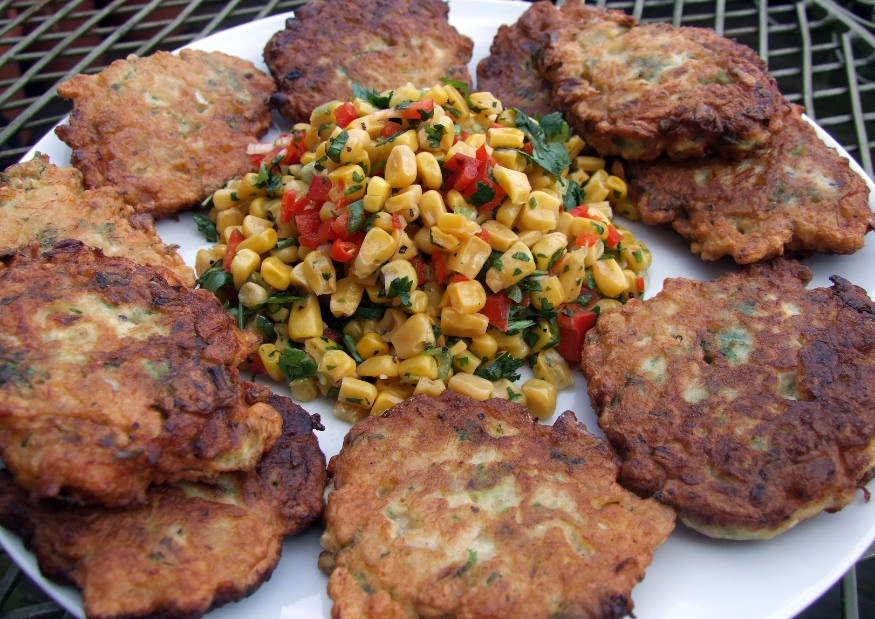 The Jamaican name for this dish, ‘Stamp ‘n Go’ is said to come from the behaviour of impatient, fritter-hungry customers who would stamp their feet for attention and then simply leave the shop if they didn’t get it. Leave without the fritters? Eh? There must be another part to that story; I’ve only eaten them once and I’m hooked. This is the kind of recipe you know you’re going to love but just never get around to making and then you kick yourself repeatedly once you do. Piping hot, fresh golden batter bombs explode with poofs of salty, spiced steam ready for the mighty plunge into bud-tingling chilli sauce.

With a big bag of fillets left over from the okazi soup and a trick up my sleeve for preparing it quickly, these were a doddle to knock up on a school night. I gave the fillets just two boils in fresh changes of water this time to keep a chewier texture and slightly more salt, before adding the flakes to a batter along with spring onions, chilli, garlic and parsley. Tablespoon by tablespoon they dropped into a skillet of shimmering oil, spreading out just enough before crisping quickly to ‘eat-me-now-dammit’ brown. Inside, the salt fish brings an insanely satisfying toothsome chew, surrounded by the fluffy flavour sponge of batter. We inhaled the lot in minutes and not many of them.

I took the simplest approach possible when it came to the sauce and lobbed a can of chopped tomatoes, about 5 regular red chillies, a few cloves of garlic, some salt, some vinegar and some sugar into a pot and cooked it down on the tame side of furiously for about 20 minutes, before half heartedly stabbing at it with a stick blender; it repaid me way too generously for my meagre efforts.

That said, as soon as the first fritter began its inevitable and rapid journey towards my belly, there was talk of spicy sweetcorn relish. I honestly cannot think of any better accompaniment; I kicked myself once more. In my future right now, I see fritters: great towering piles of steaming fritters accompanied by bowls, no, vats, of hot sweetcorn relish. I won’t hesitate to stamp until I get them.

Soften the spring onions, onion, garlic and chilli in a little oil until soft but not coloured. Add to a bowl with the salt fish and parsley. Beat the flour, milk and eggs together in a separate bowl until smooth then combine with the fish mixture. Season with black pepper (no salt).

Heat a 2cm depth groundnut oil in a skillet or frying pan and drop tablespoons of batter in, turning once, until golden brown on both sides. Drain on kitchen paper and serve.