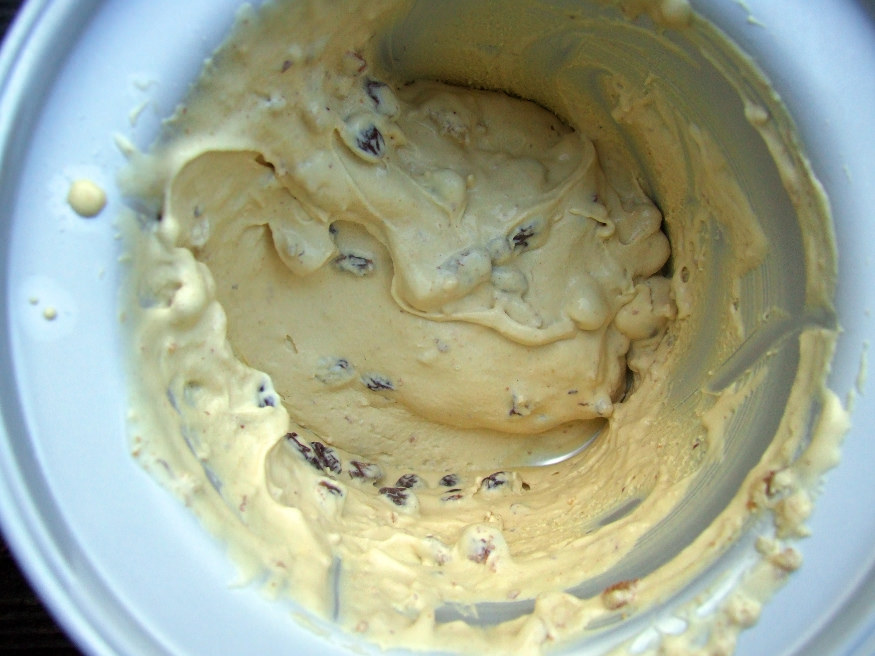 The old school ice cream flavours are the best. Mint choc chip, raspberry ripple, tutti frutti. I have a particularly soft spot for rum and raisin though, probably because it contains BOOZE. Flavours like R & R are rarely seen in the shops nowadays, bullied off the shelves by the likes of that total whorebag ‘chocolate fudge brownie’ and tacky slapper ‘cherry garcia’.

I had to make some proper rum and raisin at home and I had to make it gooood. I started by looking into rum. Spiced rum. I’ve never really been much of a rum drinker to be honest so I asked around and Kraken seemed popular with those in the know. The bottle is also pretty damn cool…

So it tastes like er, spiced rum; cloves, allspice, bit of cinnamon. It also has quite a strong caramel flavour which I find rather unpleasant to drink but which works well in ice cream. I thought I’d added too much in the first batch but actually the flavour rounded out after a couple of days and I decided to stick with it. I wanted as much rum in the mix as possible, basically. What I did do the first time however was add too many raisins. I told my friend about this and he just tutted loudly and said ‘huh, classic mistake’ in a disdainful manner. He was right of course, which is what made it so annoying.

Anyway, I made another batch and it kicked ass so, HA. What really makes this ice cream the shiz however is the banana bread chunks. I was gifted a piece of banana bread by my mates who were basically trying to offload all the food in their cupboard before going on holiday. On a whim I broke it up, chucked it in the ice cream maker and churned it very briefly in the hope it would somewhat resemble cookie dough in texture, rather than disintegrate into a thousand bits of grit. As it turned out my recklessness (I really know how to live) was rewarded with lovely gooey squidgy pieces.

I’ve been knocking back bowls of this but I’ve still got loads left and I’m wondering what to do with it. Ice cream sandwiches with wafers are definitely on the cards and I spent a good half an hour on the 185 to Catford contemplating the idea of wrapping banana bread around the outside to make a kind of pimped arctic roll. I want to spend my days playing around with custard, booze and fruit, basically. I think that’s an entirely reasonable use of my time.

Put the raisins in a small pan with the rum and warm them through gently. Set them aside in a bowl to let them get on with plumping up.

Whisk together the egg yolks and sugar. In a saucepan bring the milk, salt and orange peel almost to the boil. Don’t let it actually boil. Pour this on to the egg yolks, whisking really well at the same time.

Return this mixture to the heat. Add the cream, rum and the raisins. Cook this over a low heat, stirring gently and scraping the bottom of the pan. Keep the heat low and remain patient until the custard begins to thicken. It is ready when the custard coats the back of a spoon. This happens at 80C. With hindsight, it might be easier to separate the rum and raisins and add the raisins towards the end of churning, particularly if you are not familiar with making custard as the raisins make it harder to judge when it is starting to thicken.

Set the custard aside in a bowl and cover it to stop a skin forming. Let this cool completely then ideally refrigerate for a few hours or overnight. Discard the orange zest.

Churn in an ice cream maker. Towards the end of churning, add the banana bread chunks, mix very briefly, then freeze.