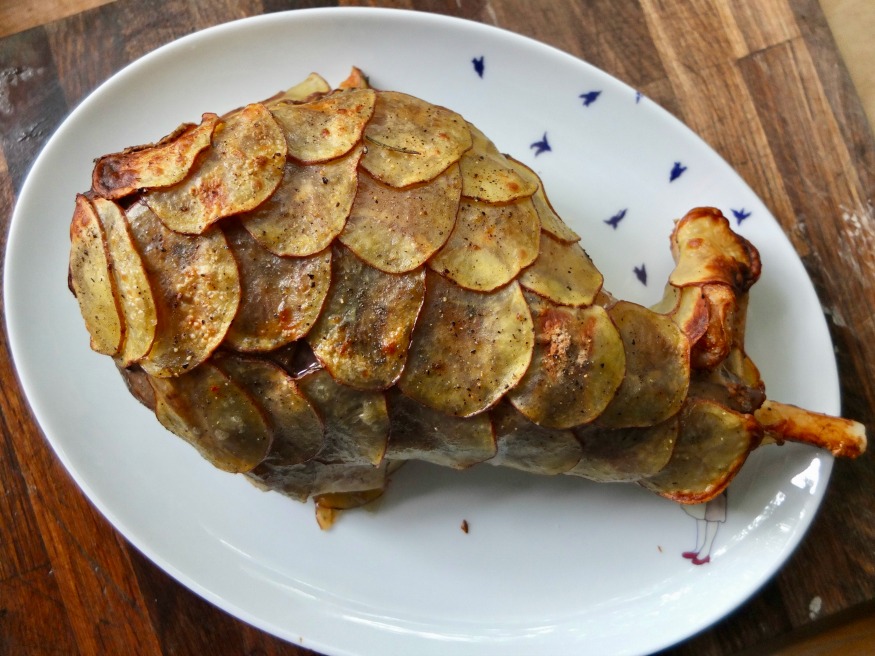 Recipes are very rarely ‘original’ these days unless you’re the man on Come Dine with Me who served a viscous, beige stew inside a castle made of toast, or Rachel from Friends attempting a trifle. Even if you think you’re the first to come up with a particular arrangement of ingredients, someone else has probably had the same inspiration. Recipes are constantly tweaked, adapted, repackaged and resold in different ways. 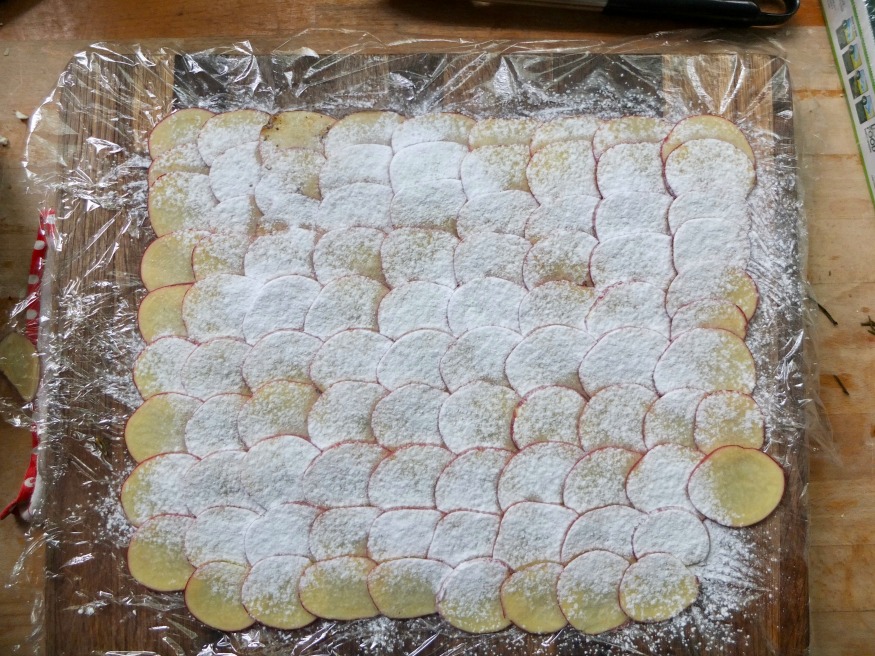 The idea of covering things in scalloped potatoes is nothing new (stewed meat for example, or a fish pie) but I’m not sure I’ve ever seen it over a joint before, like cucumber ‘scales’ on a whole salmon. I say that as someone who hasn’t embarked on even the laziest of Googles. Still, someone somewhere will have done it. Get in touch, fellow genius, for this is one of the greatest potato and lamb combos ever conceived, and I can say that with full enthusiasm because it was not my idea. 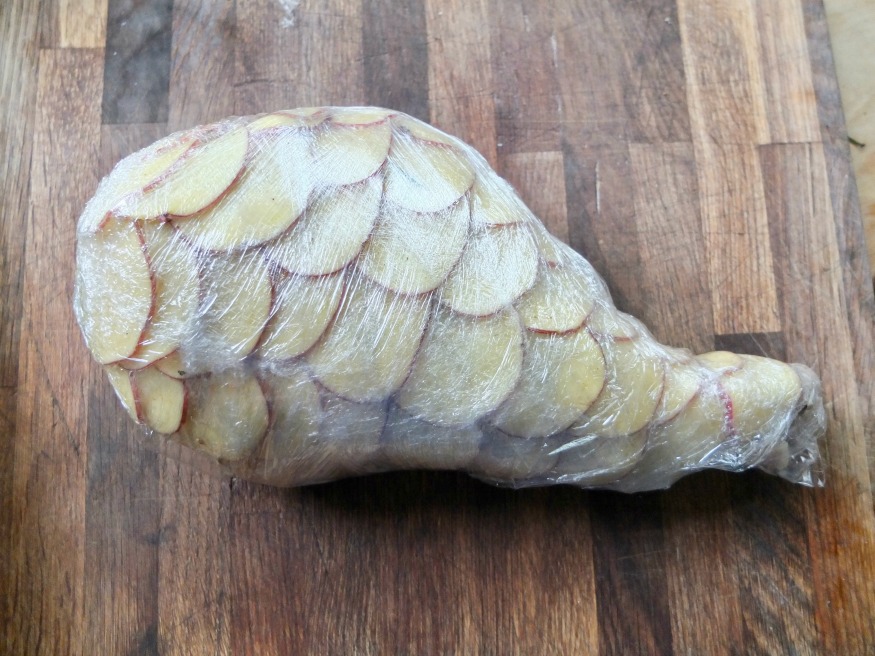 Having acknowledged how incredible this was I have to say that we both thought it was destined to fail. How would the potato slices stick to the lamb and not slide off during cooking? Answer: sprinkle with potato flour. We also wrapped the scaled lamb leg in clingfilm once roasted to allow the slices to ‘set’ into shape, then carefully unwrapped and slung it into a hot oven to cook the potatoes and get them good and crisp. Miraculously, it emerged in fully burnished armour.

You get the name, right? It looks like an armadillo but it’s made with lamb. That’s got to be an original.

I recommend adding a layer of potatoes underneath the lamb too, ensuring you get a good haul of lamb fat soaked spuds – actual heaven (and not a new idea).

Place the lamb in a roasting tray and score the fat on top. Rub with the oil and season really well with salt and pepper. Roughly chop the rosemary and add that too. Lob the whole garlic bulb into the roasting tray.

Cook for around 45 minutes or until an instant-read thermometer reads around 45C at the centre (this isn’t cooked enough yet but you are putting it back in the oven).

Lay a sheet of clingfilm on a work surface and layer the potatoes on it, overlapping (see picture above). Sprinkle evenly with potato flour as shown, then lay the lamb on top, fat side down. Now you need to carefully mould the potatoes around the lamb leg without them all shifting around. Let those you don’t need fall away (e.g. you won’t cover the base of the lamb leg) and rearrange any that have moved. It’s not TOO hard if there’s two of you doing it, although I say this as someone who has made the above recipe precisely once. Rigorously tested it ain’t – go forth, culinary adventurer.

Wrap the clingfilm really tightly around the lamb leg, adding a couple of extra layers once secured, and leave to sit for 45 minutes. Whack the oven up to 220C.

Place lots more potato slices in the roasting tray to make the best potato crisps you’ve ever eaten. Carefully remove the clingfilm and place the lamb back on top of the potatoes. Cook for approximately 15 minutes then turn the oven up to 280C (or as hot as your oven will go) for a final 5 minutes, or until golden and crisp.