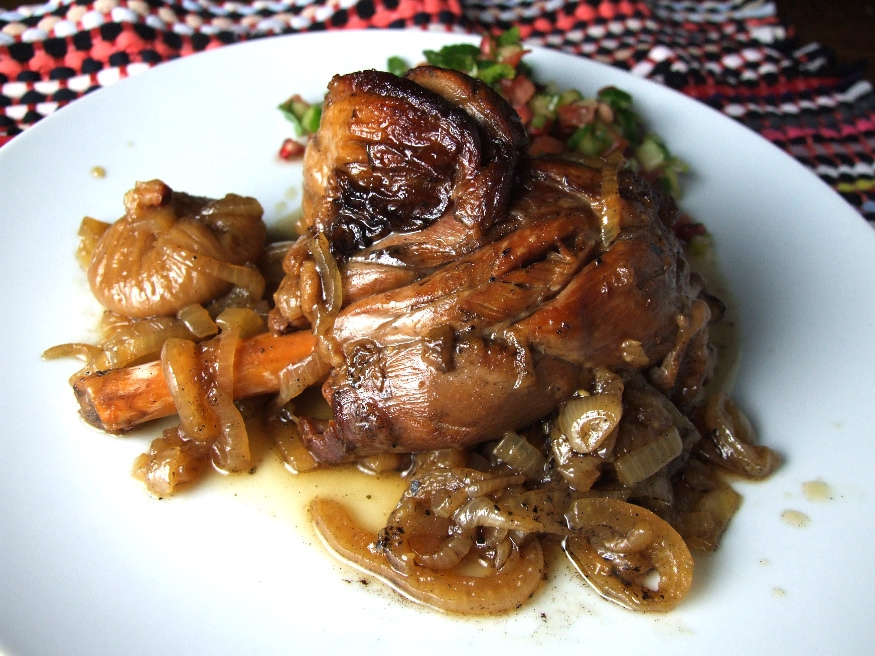 When I saw some lamb shanks going cheap, I snapped them up then scuttled away fast before anyone remembered to make me pay through the nose for them. I’m a bit in love with the flavour of lamb cooked with sweet dried fruits, especially for a long roast or braise; this time I decided on a mixture of squidgy semi-dried figs and pomegranate molasses. I added a quantity of sliced onions described in my scrappy notes as ‘a shitload’, which cooked down to a caramelised base; the figs plumped and leached their sticky treasure while the pom molasses licked everything it touched with that magical, Arabian Nights perfume.

A scotch bonnet was pinpricked to gently seep heat, riding the bubbling sauce for a good 3 hours until the meat was flopping off the bone in great silky lobes; it was all I could do to get them onto the plate in one piece.

We ate it with a pomegranate and cucumber salsa because we’d eaten rather a lot already that day (the perils of recipe writing: I’d done a dhal for AoL and a quiche for the new Lurpak Christmas site) but it would be lovely with something stodgy to soak up that sauce; rice, mash or even a chunk of Middle Eastern style bread.

(serves 2, although you could divide up the meat and serve 4, with sides, if you have big shanks)

Fresh pomegranate seeds to garnish (optional); some chopped coriander would also be nice, now I think about it.

Cover a plate with flour and season it with salt and pepper. Roll the lamb shanks around in the flour until they are completely covered. In a large, oven proof casserole dish, heat a little oil and brown the lamb shanks well, all over.

Set the shanks aside and add the onions into the hot fat in the pan. Keep cooking and stirring until they start to colour. Add the stock, scraping around the bottom of the pan to get all the good caramelised bits to loosen then turn off the heat and add all the other ingredients plus some salt and pepper. You can cut open a few of the figs to encourage them to give forth their contents.

Put a lid on the pan and cook for about 2-3 hours, or until the meat is falling off the bone. You can then take the lid off an reduce the sauce if you want but I was too hungry so I just drizzled a bit over and chowed on down.