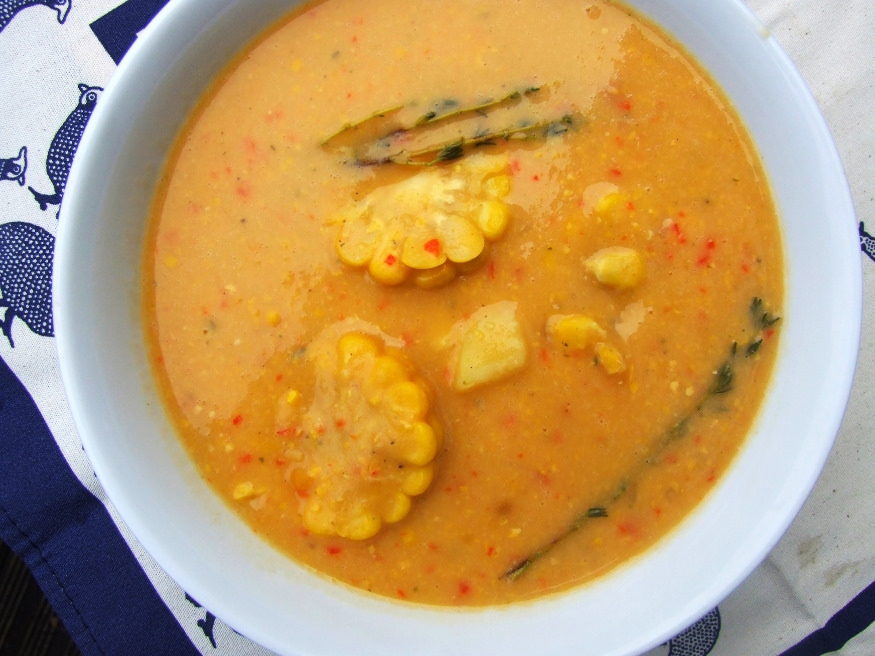 It’s the end of the summer and the corn is going cheap. I bought four cobs for a quid in Peckham yesterday and a frankly quite staggering twelve red peppers for the same. Twelve. Not joking.

This soup only uses one you’ll be pleased to know, along with two cobs and some classic Caribbean flavours: thyme, scotch bonnet chilli and coconut. It’s a hearty mix, thickened with yellow split peas and potato but my version is light compared with other recipes which use pumpkin or squash and other vegetables. I prefer a fresher version that keeps the focus on the juicy bursts of corn. I strip one cob and slice the other so I’m not denied the pleasure of gnawing on it.

The scotch bonnet chilli is left whole and slit lengthways to release just moderate fruity heat and the creamy coconut milk smooths things over. It tastes tropical and most importantly, it celebrates the corn. At that price, it would be rude not to.

Heat a couple of tablespoons of vegetable or groundnut oil in a pan and add the onion. Let it sweat over a lowish heat for about 8 minutes then add the garlic for a couple of minutes more, taking care not to let it burn. Make a cut down the length of the chilli, but keep it intact and add it to the pan with the split peas, thyme and stock – simmer for 30 minutes.

Prepare the corn by shaving the kernels from one of the cobs, running your knife down the sides, top to bottom. Slice the other one into 2cm thick slices (I nicked that idea from this recipe recently. I also nicked their presentation). Add the corn, coconut milk and potato and simmer for 10-15 minutes. Add the red pepper for the final 5 minutes. Season with salt and pepper.

Allow the soup to cool a little then remove the chilli, thyme and corn slices (reserve the corn slices) and blend half the soup. If it is still quite hot then make sure not to fill the blender more than half way and hold the lid down because if you don’t you will end up with soup all over your kitchen. It will blast the lid off the blender. Return to the pan and add back the corn slices. Reheat if necessary, adjust the seasoning and serve.