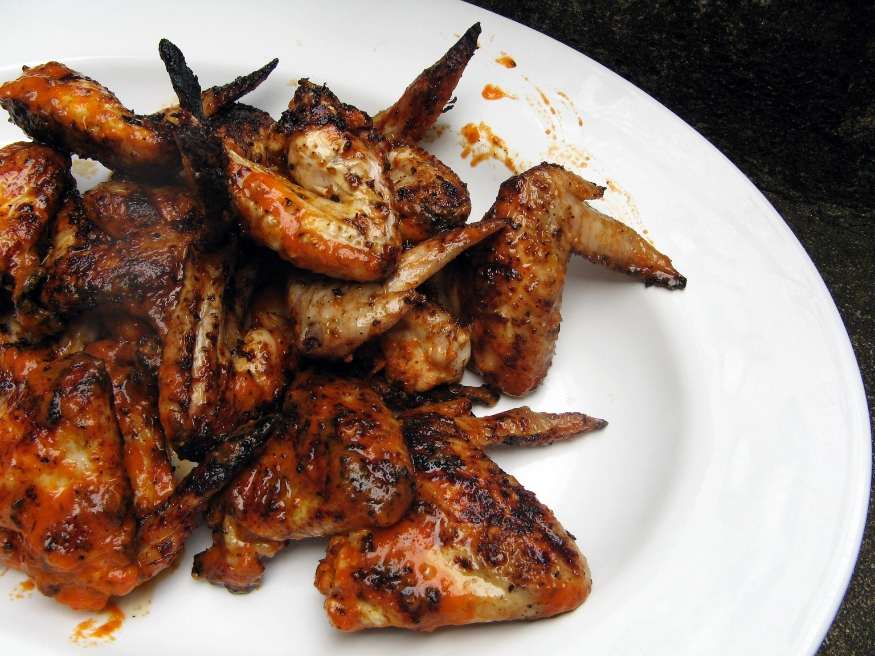 This isn’t turning into the grilled meat blog, I promise. It’s just, well, it’s summer isn’t it and I’m either having or getting invited to a lot of barbecues. Wings always fit the bill because they’re cheap, cook quickly and have a lot of fat for their size, which means loads of crisp, charred skin. Tick, tick and tick.

Thinking about it, this is probably the unhealthiest of all ways to cook wings without deep frying them first.* They’re hot wings you see, which means they’re bathed in hot sauce cut with a load of melted butter. 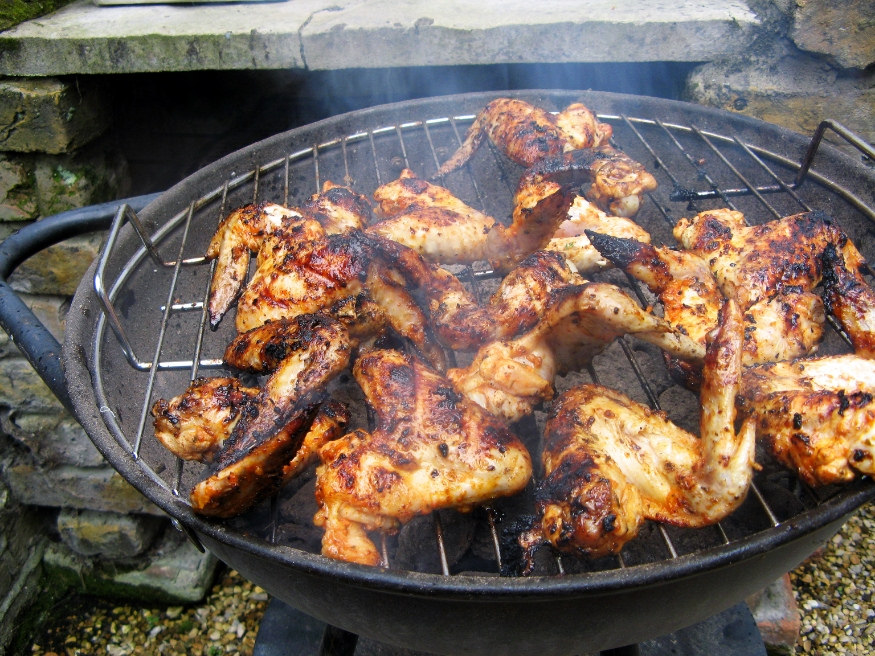 But I’m getting ahead of myself. It begins the night before with a marinade made from onion, garlic, thyme, oregano and paprika. Then right before cooking you melt the butter with the hot sauce, dunk the wings in half of it and grill them, reserving the other half for later. When they are charred and cooked through, you dunk each once again in the sauce, leaving a sweet-spicy coating, silken with butter, which stains your fingers and face bright orange.

These went down well at the BBQ but they weren’t hot enough because I ran out of hot sauce. Traditionally you would use Frank’s to make hot wings; I didn’t as I needed to use up my homemade scotch bonnet sauce but I didn’t realise quite how much the butter would tame it. Still, easily remedied in future. I served them, as is traditional, with celery sticks and a blue cheese dip, which make for a cooling interlude between each sticky wing.

Sticks of celery and blue cheese dip, to serve.

Process the onion and garlic in a blender with 1 tablespoon water until you have a puree. Put this puree in a bowl with the salt, thyme, oregano, pepper and paprika. Put the chicken wings in a large dish and rub the marinade all over them, giving them a good rub to make sure each wing is well coated. Refrigerate overnight.

When you want to cook the wings, remove them from the fridge to come to room temperature and start your BBQ. When the BBQ is ready, melt the butter in a small pan and stir in hot sauce to taste. You’ll want it nice and spicy. I only had half this kilner jar of sauce and if you’re using a shop bought sauce you’ll need to experiment. Don’t worry though, it’s not exactly rocket science. Split this sauce into two bowls.

Dump the wings in one of the bowls and mix to cover with the sauce. Grill the wings until charred all over and cooked through. When cooked, dip each into the remaining bowl of sauce.

Serve with sticks of celery and the blue cheese dip.