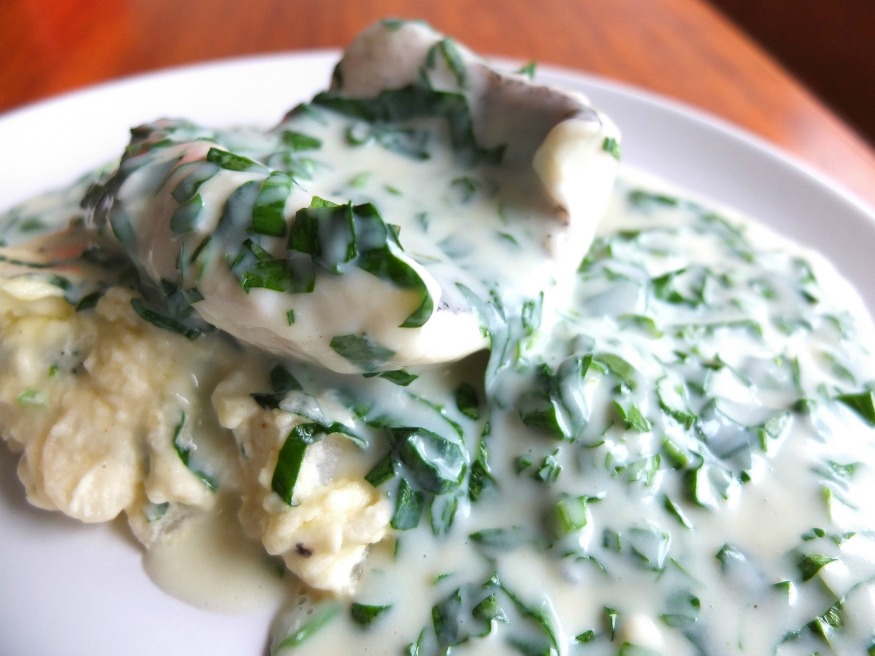 I often enjoy popping my rose-tinted glasses on and having a look back at the food I grew up with in the 80’s. Perhaps many of you have stories about grannies and apron strings but what I have is memories of things that came in boxes marked Findus or Bird’s Eye. Fond memories. In the wake of the horsemeat scandal I was delighted to trot down memory lane and revisit the Findus Crispy Pancake, which I filled with 100% horse and coated in crumb the colour of cheesy Wotsits. Yesterday, it was the turn of boil in the bag cod in parsley sauce.

I expect many of you remember this delicacy of cod and sauce ready combined inside a flappy plastic bag, which your mum simply plopped into the water and served up 15 minutes later with peas and mashed potato. It was a personal favourite of mine and so we decided to have a bash at recreating it, with some more modern-day high falutin changes, natch.

I’m a big fan of Farmdrop, which is why I had these hake fillets in the fridge, but also why I didn’t have any wild garlic, since it had failed to arrive from their supplier. I thought it would be so lovely in the sauce that I became a touch obsessed with finding some, spending two hours traipsing around local woodland with no luck; in the end, I bought some in Borough Market for the very reasonable price of ten million pounds per kilo. 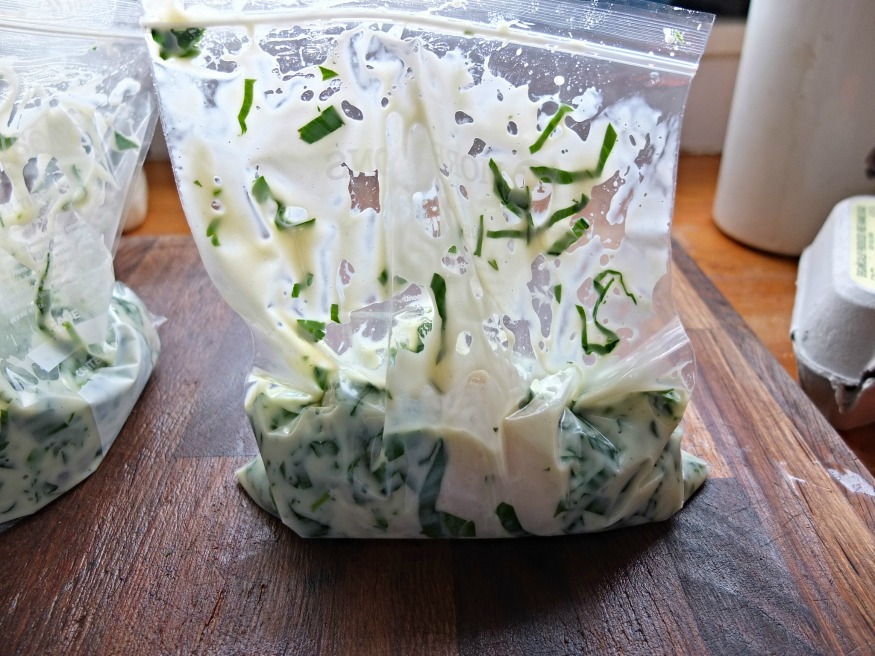 It’s very simple this recipe. Just make the sauce, cool it a bit and whack it in sandwich bags with the fish. Is it ok to cook things in sandwich bags? Apparently. I wanted to do this recipe so I didn’t ask too many questions. It’s basically like sous vide except sous vide fish is gross and slimy so we just poached it at a slightly higher temperature (using a thermometer). You could, of course, poach it separately or fry and serve with the sauce but really, you’d be letting the team down.

The mash is lumpy yes, thanks for asking. The reason for this is because we poshed it up by doing half spud, half salsify, and the latter broke our crappy potato ricer (because I bought it in Khan’s). What you see there, then, is lovely smooth mash with chopped salsify in it. We also forgot the peas.

All in all, a resounding success.

This is actually incredibly delicious and there’s no reason at all for you to stuff up your mash or forget the peas.

Bring the milk to the boil with the onions, bay and peppercorns, then turn off and leave for 10 minutes. Strain.

In a clean saucepan, melt the butter, then add the flour to the pan, stirring constantly until it’s combined into a light brown paste. Slowly add the milk bit by bit, stirring until each addition is incorporated in the sauce. The sauce should coat the spoon, leaving a clean area for a second on the base of the pan after swiping with a spatula.

Cover with cling film, laying the film directly on the surface of the sauce. Leave to cool a bit.

When cool (you just don’t want it too hot), add the parsley and wild garlic and season to taste (it’ll take quite a bit of salt as it’s rich and creamy).

Put one hake fillet in each bag then spoon in the sauce. Bring a large pan of water up to about 40C, then push the open bags gently into the water allowing the water pressure to force the air out of the bags, once the surface of the water is just over the zip lock line, seal the bag. Bring the water up to about 56C and cook on the lowest heat for 15 mins. When ours were done the water was about 64C, so the fish was cooked through and still super moist.

Serve with mash, peas and a heavy dose of nostaglia.