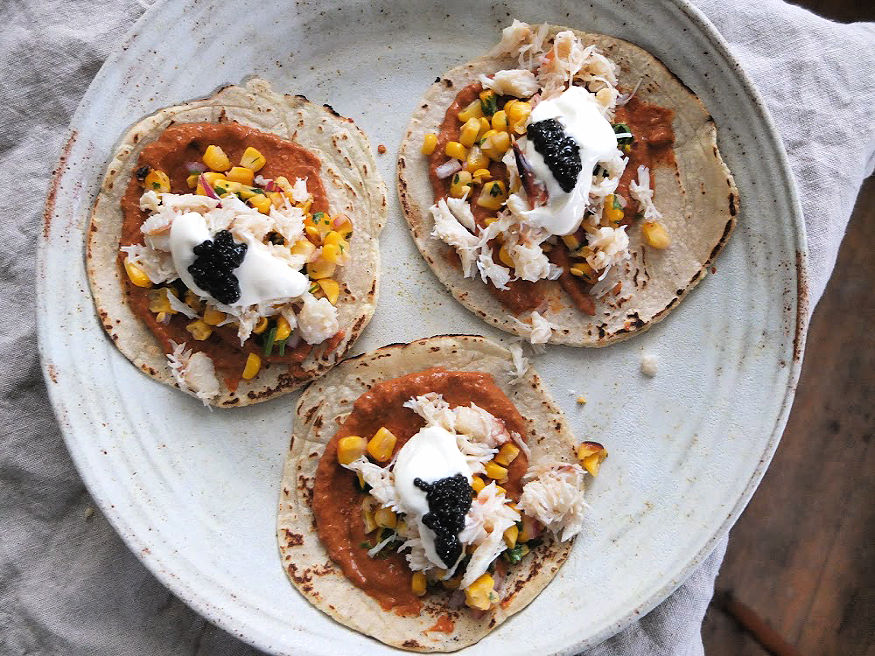 I remember reading some ‘dieting advice’ once, probably during the ’90’s when I was an impressionable teenager and therefore likely to have been seeking out that kind of drivel. The author – who I imagine now writes articles about baking eggs into the centre of avocados, or runs a ‘cartwheels on the beach’ Instagram account – advised readers ‘never reward your success with food.’ Are. You. Actually. Freakin’. Kidding.

Woman, did ya not know that rewarding oneself with food is one of life’s greatest pleasures? I feel sad that you were not able to get a new job, pass a test or (let’s face it) do something very routine and dull like pay a bill or go to the dentist without promising yourself a fat sandwich afterwards, or a share-size bar of Dairy Milk. How did you reward yourself, exactly? Perhaps a stern rap on the knuckles (good for staying ‘in the moment’) followed by two hours of step aerobics? Buzz off. 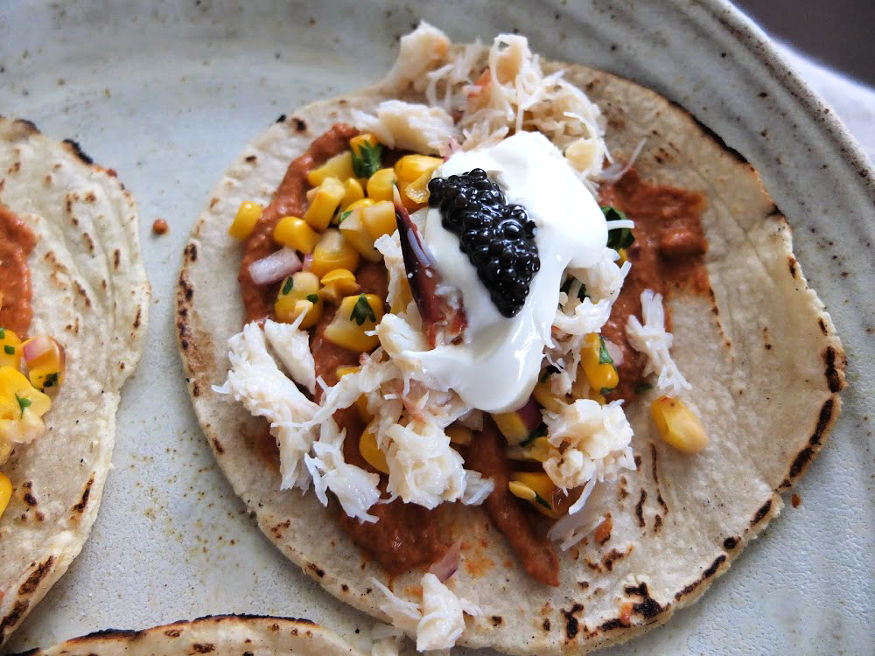 When I want to reward myself with food like a normal person I know how to do it properly, which brings me to these crab tacos. We’ve recently enjoyed various successes in this house and wanted to celebrate but we’ve also had some struggles and the logical response to both is the same: good food. If this were a ’90’s multiple choice quiz with absolutely no scientific basis my answers would now reveal that I am ‘C: The Emotional Eater.’ Who isn’t? If you see food as ‘just fuel’ then we are too fundamentally different and I think you meant to click on the link to www.don’tsabotagemy#gains.com.

We had to really work for these as well due to an apparent shortage of masa flour in the south east London area. In the end we bought some in Wholefoods (Picadilly) and as a result made an important discovery which is that the Cool Chili Co. masa flour is WAY easier to make tacos with than this Mexican brand, the one we usually buy. Our tacos often turn out a little crumbly but with the very finely ground Cool Chili Co. stuff they were pretty much perfect. If you’re having the same trouble, give it a go. They have a stall at Borough Market as well as the online shop. 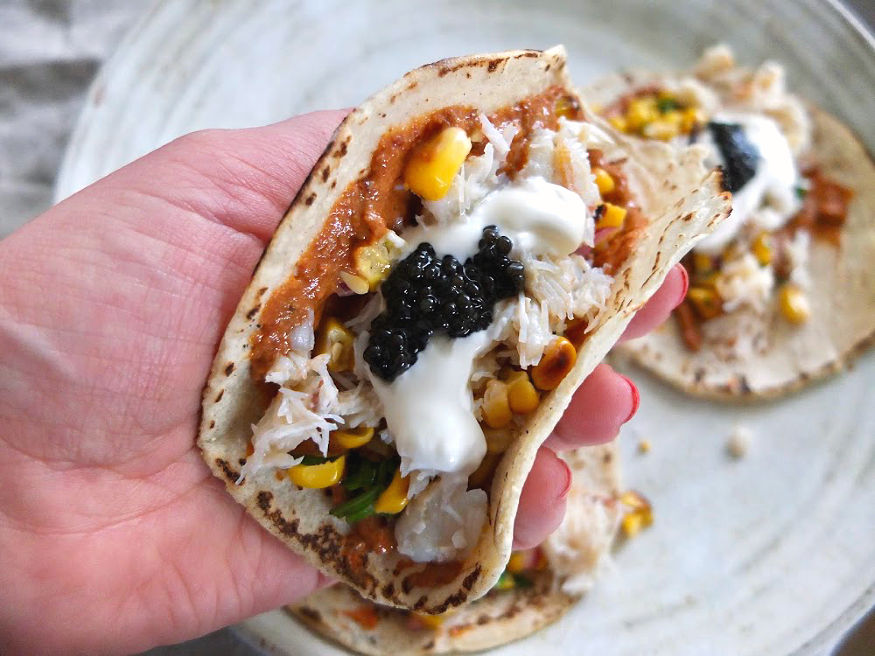 We’d already come up with this recipe a few months back during a test run. The brown meat is mixed with smoky Mexican chillies, topped with a lime-heavy grilled corn salsa, white crab meat, sour cream and then – because why TF not – some caviar. Not the massively expensive stuff you understand but enough to give it a salty kick and make you feel like a boss. Enough to make you feel like you’ve received the reward you deserve for just, like, existing in the world without making a hash of it. If you want to make a hash, of course, then rock on.

You can make this with 1 large, whole crab if you want to cook it yourself but obviously, the amount of meat will vary. I’ve given you the weight of meat here to make things simpler. This makes around 18 tacos.

150g brown crab meat
200g white crab meat
1/2 dried Guajillo chilli
1/2 dried Ancho chilli
1/2 Pasilla chilli (obviously, just use one variety if you have one but I happened to have three – or mix it up)

Barbecue the corn cobs until lightly charred on all side. Shave the niblets (NIBLETS!) from the cob and mix with the other ingredients plus some salt. Set aside.

Soak the dried chillies in boiling water for around half an hour, or until softened. Deseed and whizz in a blender with the brown crab meat. Set aside.

To make the tacos, put the flour in a bowl and add the salt. Add 350ml water and bring together into a ball. Cover this and let it sit for 20 minutes. Press on the ball – if it cracks you need to add a bit more water. Do this a tablespoon at a time until it’s soft but not sticky. Divide into approx 30g balls. These instructions I copied from the back of the masa flour packet – they’re very good!

Line a taco press with a greaseproof paper square and place a ball on it. Put another square of paper on top and press.

Heat a dry frying pan or skillet over a medium-high heat. Cook each tortilla in a dry pan until the tortilla begins to release itself from the pan – 20-30 seconds. Flip – sometimes they puff up (desirable), sometimes they don’t. Don’t worry about it. Keep warm wrapped in a tea towel.