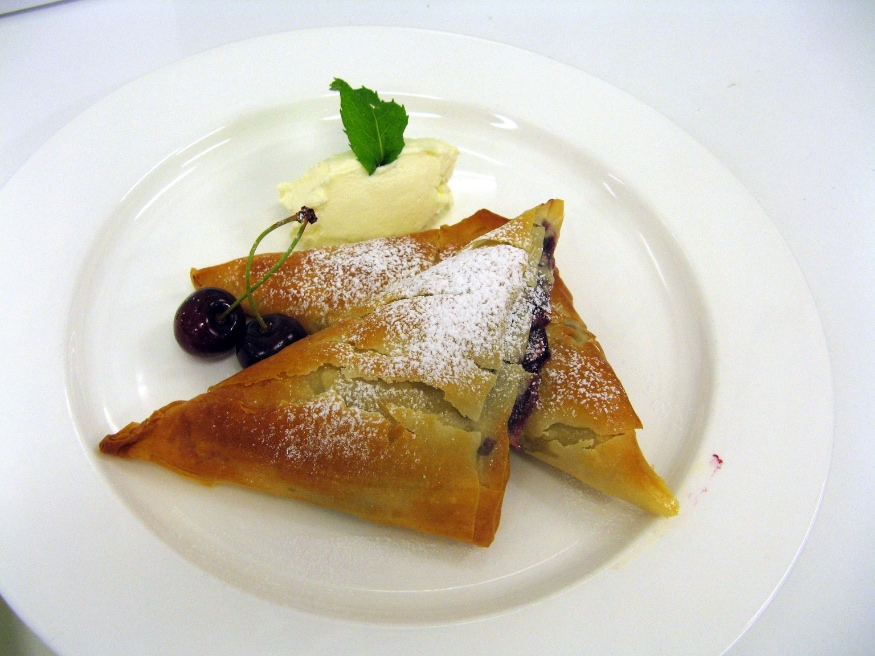 The cherries here are flambéed, then cooked down until gooey and confected. The mixture is then cooled before being dolloped onto filo pastry, folded into samosas and brushed with lots of melted butter – sweet, jammy cherry mixture encased within hot, crisp filo all ready for a good dippy dippy into cooling, apple kissed mascarpone.

Just be careful to let them cool down a bit before eating or you could end up with a pop tart/Maccy D’s apple pie situation, and don’t pretend you don’t know what I’m talking about, we’ve all done it.

Pit and halve the cherries, reserving a few for garnish. In a non stick frying pan, melt a knob of butter until foaming, and then add the cherries. Add the tablespoon of sugar and cook on a low heat until the juices are released. Pour over the brandy and carefully bring a lit match towards it – it should catch fire and flambé the mixture. Simmer on a low heat until thickened and syrupy. Taste it and if needed, add more sugar. Take off the heat, throw in the mint, chopped finely, reserving one leaf. Leave the mixture to cool.

To fold the samosa, take out the filo and slice into three lengthways. Melt the pack of butter and pour off the clarified butter, discarding the white bits. Using a pastry brush, brush one lengthways layer of filo with the butter, then lay another on top. Brush again with butter and lay another one on so that it’s 3 sheets thick. Spoon a tablespoon’s worth of the cherry mixture onto the bottom corner of the sheet, then fold the sheet carefully into a triangle, pressing down the seams. Butter the rest of the sheet and carry on folding until you’ve run out of pastry, sealing the seams as you go along. Repeat until you have 8 samosas (2 per person). When you come to baking them, brush both sides with butter (no one said it was a healthy recipe…) and bake in a hot oven, around 200 degrees C, for 10 – 15 minutes or until browned. Meanwhile, grate the apple into a clean tea towel and squeeze a little of the juice out. Mix with the mascarpone.

To serve, dust the samosas with icing sugar and place two on the plate with a quenelle of the mascarpone. Garnish with a mint leaf and a couple of cherries.

For Lizzie’s post about our yumsome samosas go here.

If you’re in a generous mood, Action Against Hunger have teamed up with Nom Nom Nom and are holding a charity raffle; prizes include a meal at Le Gavroche… Click here to donate.