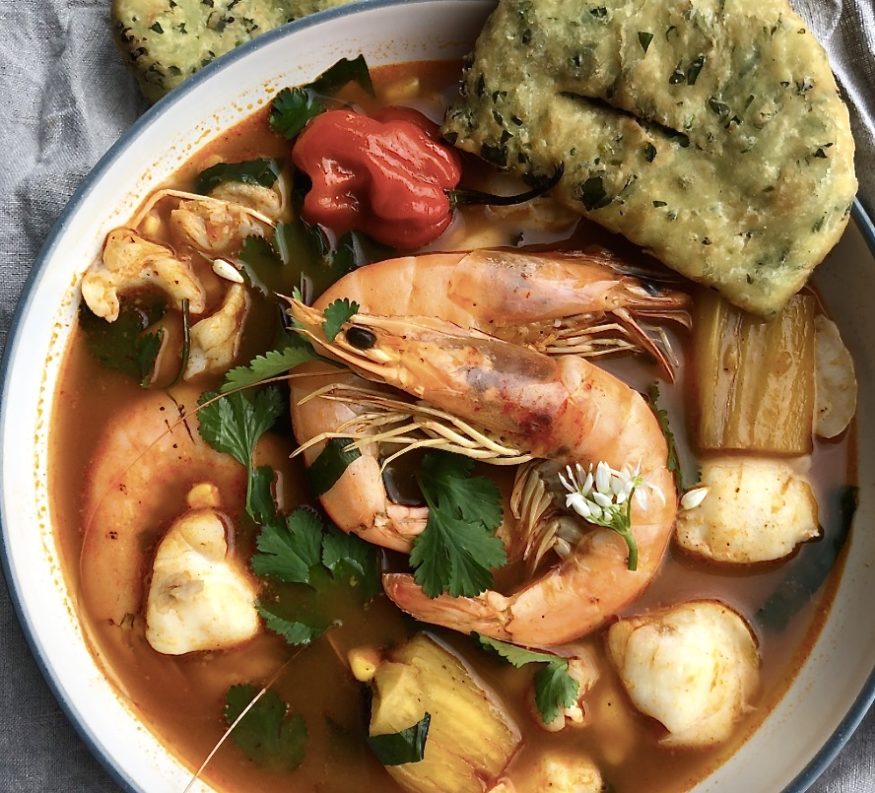 Those of you who follow me on Instagram will know I was in Belize in Central America a couple of weeks ago. I can’t write much about that trip now because it will all be published in a magazine later this year but I came back feeling very inspired by the food, and I wanted to create something which incorporated Caribbean ingredients. Longtime followers will know that the food of the Caribbean has always attracted me and I learnt lots in Belize, where the cuisine combines many culinary influences.

I’ve used achiote in this soup – an earthy flavouring made from ground annatto seeds, also popular as a colouring agent. I was already familiar with it as an ingredient in Mexican pork pibil recipes but using it to flavour soups and stews was new to me. I added it to a base of homemade fish stock with pierced scotch bonnet chilli and some cassava – a total revelation. To be honest, I’d always dismissed cassava as a boring starchy root but it has a really interesting nutty flavour and the texture of a very waxy potato.

I used cod cheeks because they’re really good value and hold their bouncy texture well in soup, and splashed out on some massive, meaty prawns. On the side, I made fry jacks, which are deep-fried dough dumplings served with pretty much anything in Belize – eggs, refried beans and cheese are all popular toppings. I’ve added wild garlic to mine, which brings me just about to the end of the bin bag of wild garlic I’ve been working through for the past week.

This is a stunner of a recipe (even if I do say so myself) with deep flavour from the fish stock but a lightness, too. The corn brings pops of sweetness and the scotch bonnet a background buzz of tropical heat. The jacks were a perfect accompaniment while still warm – crisp on the outside, fluffy and garlicky inside and ready to soak up that soup. Heaven.

For the fish stock

600g cod cheeks
8 raw, shell-on king prawns (you could shell these if you want to make the eating easier but I like to get messy and suck the heads once cooked)
2 scotch bonnet chillies, pierced and left whole
300g cassava, peeled, woody core removed and diced
1 teaspoon achiote powder
Handful wild garlic leaves washed and sliced
2 corn cobs, kernels sliced off (or you could use a tin)
Handful coriander

For the fry jacks

First, make the fish stock. Melt the butter in a large saucepan and fry the onion for a few minutes. Add the fish heads and scraps and fry a few minutes longer. Add the water, herbs and a pinch of salt and bring to the boil, skimming off the scum. Reduce to a simmer and cook for 20 minutes, then strain. This is the base of your soup.

Make the dough for your fry jacks by mixing the flour, baking powder and salt in a large bowl. Add the butter and mix with your fingers until it resembles crumbs. Add the wild garlic and milk and mix to a dough. Knead 30 seconds until smooth, then separate into 8 balls.

Add the stock to a large saucepan. Mix a tablespoon or so of the stock with the achiote powder until you have a red paste. Add this back to the soup with the cassava chunks and allow to simmer while you make your fry jacks.

Heat a couple of inches of oil to 180C in a heavy cast iron skillet or another suitable pan. Roll each ball out into a circle on a lightly floured surface and cut each circle in half. Make a slit in the centre of each (see photo to see what I mean). Deep fry each piece for a couple of minutes, then carefully flip over. They’re ready when puffed and golden. Drain on kitchen paper.

Once the jacks are done, finish the soup by dropping in the corn, wild garlic, cod cheeks and prawns and cooking gently for 4-5 minutes. Season. Finish with the coriander and serve with the jacks.