BBQ Leg of Lamb with a Hibiscus Marinade 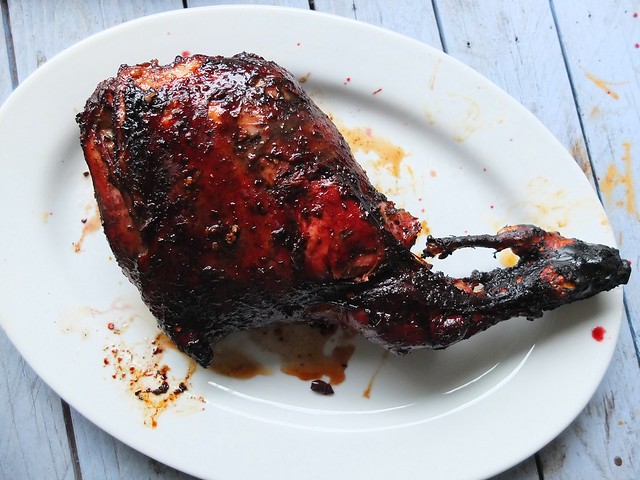 I have a Big Green Egg BBQ. I know. It’s okay, you can hate me. In all fairness, you should be grateful, actually. You heard. You should be grateful I haven’t been boasting about this for the past year because that’s just about the amount of time I’ve owned this piece of exceptional BBQ equipment. I’ve actually been very kind, if you think about it properly. I can contain it no longer, however: BGE’s are incredible. Everyone should sell an organ (might need two actually) in order to buy one.

Anyway, this recipe. I’m always seeing hibiscus flowers around Peckham but I’d never bought them. I knew that they’re used to flavour the ‘sorrel drink’ that one finds in Caribbean takeaways but…yeah that was the limit of my knowledge. They also love them in Mexico though I’ve since found out, which is where my flowers actually came from, brought back as a gift by a friend. Apparently they use them a lot more in cooking there, and also eat them candied as sweets.

The amount of flavour and shocking red colour that leaches from a handful of the dried flowers once soaked, is staggering. The flavour is a bit like red berries, with a tart, lemony edge and it occurred to me that this might work very well indeed with lamb. 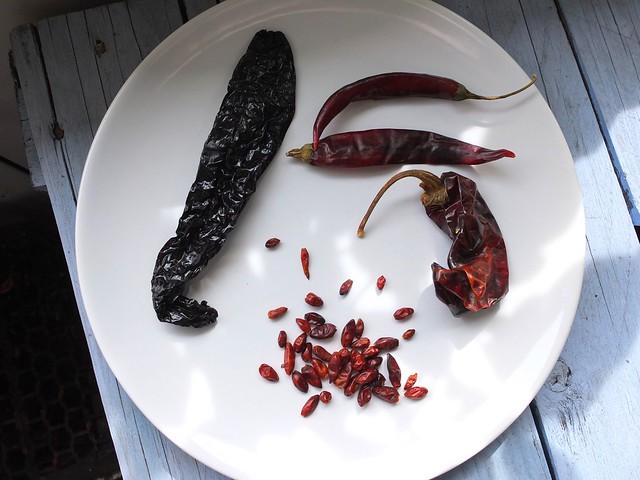 I steeped the flowers with an assortment of Mexican chillies: piquin (quite hot), guajillo (fruity), puya (similar to guajillo but hotter) and pasilla (literally: ‘little raisin’). Then I added garlic (because it’s lamb, and it’s the law) and bay. The resultant liquid was a frankly terrifying shade of red which stained the meat the colour of those curly pigs’ tails, tongues and penis shaped things (penises?) you see piled up in Brixton market. Thankfully, it was also extremely tasty: a sort of fruity, floral (yes I know), smoky thing going on.

I dunked the lamb into its bath for 24 hours, then drained it, rubbed the meat with more chillies and rammed with more garlic before cooking low and slow in the Egg. The marinade I reserved, reduced until syrupy and used for basting. That gave it a lovely sticky glaze. The leftovers were mixed with juices from the drip tray to serve at the table. We ate it in a sort of feverish caveman style, hunched over, fingers in, after-dark.

Oh and those things wrapped in foil around the outside of the lamb? Yeah they’re called ‘Death Star Onions’. They need work. 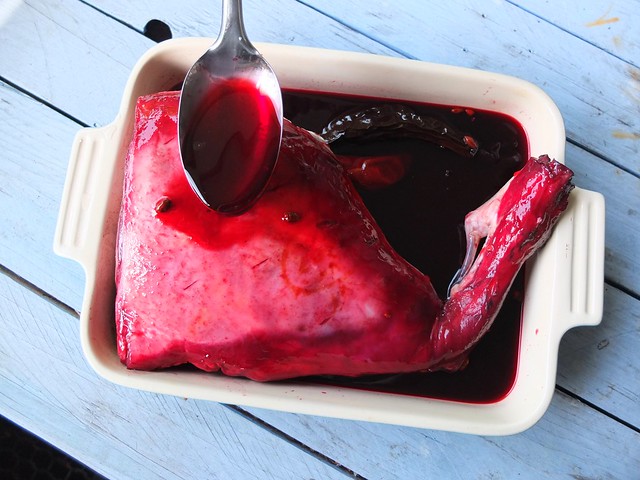 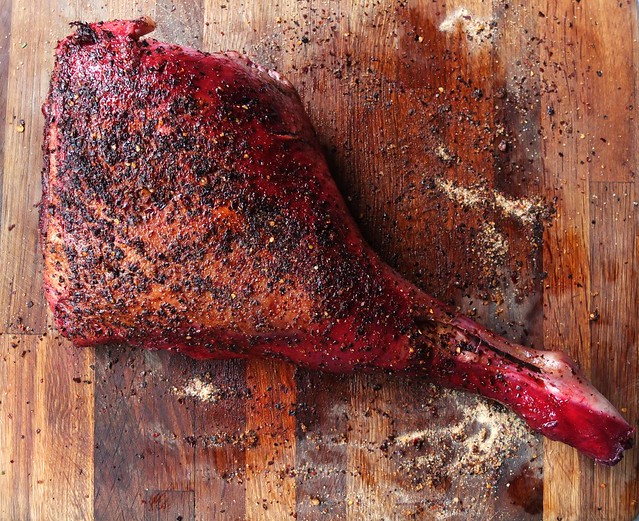 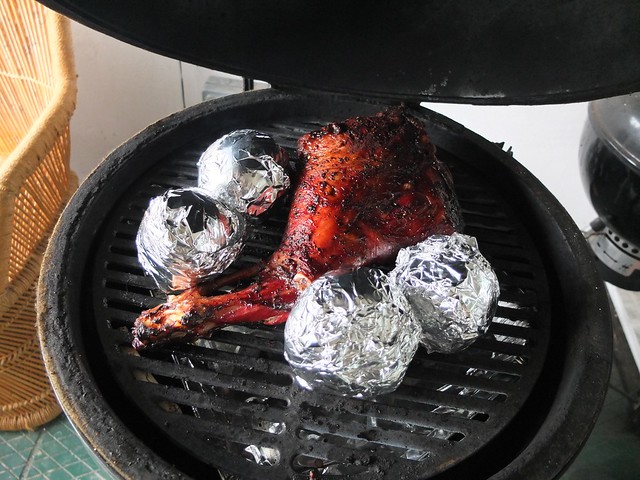 BBQ Leg of Lamb in a Hibiscus Marinade Recipe

The idea here was to get a subtle flavour seeping in from the marinade, then add the rub for more of an aggressive ‘crust’ to form during the first part of cooking, then add the glaze after that. Seemed to work.

For the marinade and basting liquid

In a saucepan, combine the hibiscus flowers with 1 litre of water, plus 2 cloves of garlic peeled and bashed a bit, the bay leaf, sugar and the chillies. Simmer this mixture for 5 minutes. Allow the marinade to cool then make slits all over the lamb, submerge it and refrigerate overnight. I had mine in there for 24 hours and I turned it once and basted it a few times.

When ready to cook the lamb, remove it from the marinade, pat dry, then strain the marinade into a bowl through a sieve. Add the extra sugar and reduce the marinade by about half until it starts to look thicker and more syrupy.

Prepare the BBQ. You want it at about 150C. You want to set up a drip pan too. This is going to be different depending on the type of BBQ you have.

Blitz the chillies, salt and peppercorns for the rub in a spice grinder. Rub this all over the lamb. Slice the 2 cloves of garlic and push the slices into the slits in the lamb.

Cook the lamb for about 2.5-3 hours until tender. After the first hour start basting it with the marinade mixture every 20 minutes or so. There will be marinade left over, so mix this with the lamb juices from the drip tray and serve at the table.