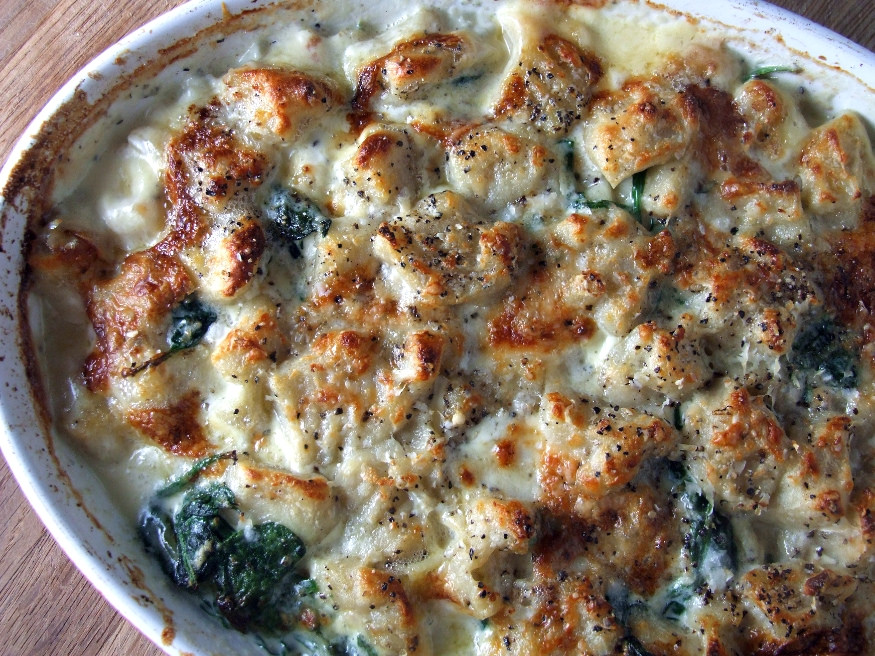 Now I know you’re all thinking about diets, detox and exercise. So am I. Let me lead you astray for a moment though as I reminisce about this baked gnocchi I made for my boyfriend’s birthday. We’d started with a venison carpaccio to keep space inside for this baked behemoth – home made gnocchi crisped on top and creamy down under, oozing wads of Gorgonzola.

I’d not made gnocchi at home before and I was startled at the difference; they were very light compared to shop-bought. I was careful not to add too much flour to the mixture because that makes them tough, apparently. Then again, too much potato and they may fall apart during cooking. Many recipes stated so many different ratios of potato to flour that in the end I threw up my arms, huffed and stomped. Then I remembered that bible of Italian cooking, The Silver Spoon. Their recipe suggested 1kg  potato to 200g  flour which of course worked an absolute treat.

Baking gnocchi is a bit like frying or baking pasta, adding another texture on top. I used a creamy rather than piccante Gorgonzola as I wanted it nice and gooey; the cheese basically forms the sauce along with a splash of double cream for good measure. The spinach worked well although you could use chard, cavolo nero or other greens instead. A sharp, lemon dressed salad on the side will balance the richness. In your face, detox!

Steam the potatoes for about 25 minutes, or until tender. Mash with a potato ricer or beat with an electric whisk (as I did) until perfectly smooth. Stir in the flour, egg and a pinch of salt and knead to a soft, elastic dough. Shape the dough into long sausages about 1.5cm in diameter. Cut into 2cm lengths. Press each gnocchi with a fork or the underside of a grater and set aside on a tea towel dusted with flour in a single layer.

Bring a large pan of lightly salted water to the boil and cook the gnocchi, a few at a time, until they rise to the top. Remove them and drain.

Gorgonzola (as much as you dare, I wasn’t really in a measuring mood. Probably used about 250g).
Double cream (again, wasn’t measuring. Look, there’s no way this can go wrong so don’t worry too much about quantities. Probably about 100ml).
Spinach, 200g (ha! I knew that one)
A little Parmesan for the top
White pepper, black pepper and salt

Preheat your oven to 180C

Wash your spinach and then, without drying it, put it into a saucepan on a low heat. Put a lid on. Let it wilt then drain it well and squeeze to rid it of some moisture (if you use more cabbage-like greens such as chard or cavolo nero you’ll need to cook them in boiling water). Put your cooked gnocchi into a baking dish, break up your cheese and spread it about; do the same with the spinach then pour over your cream. Season with white pepper, salt and black pepper. I think the two types of pepper makes a difference but you could leave one out. Grate over a little Parmesan and bake for 30 minutes or until golden brown and bubbling.