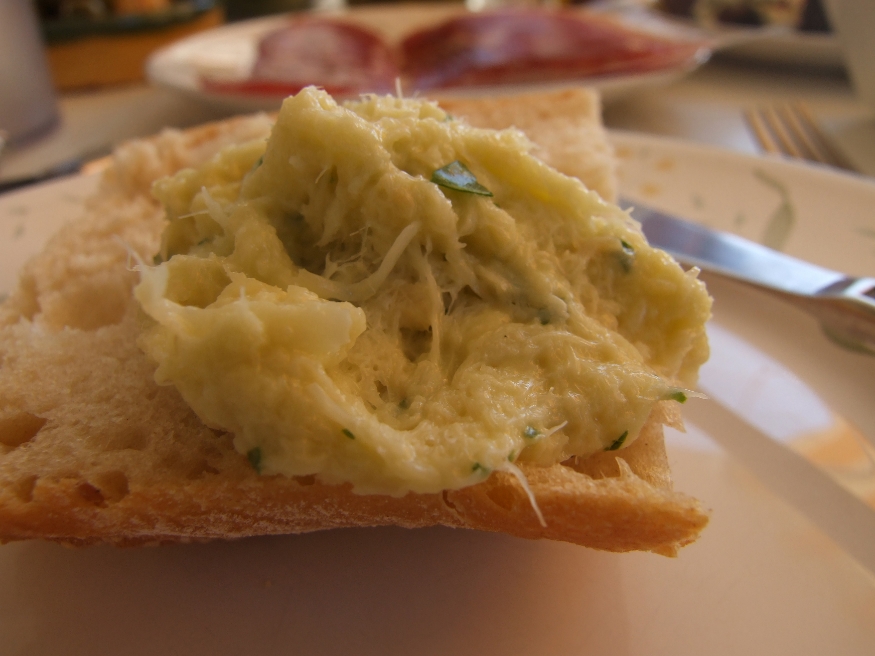 My friend Lizzie and I recently went to check out the new menu at Polpetto and fell head over heels for a blob of salt cod whippy fun called Baccalà Mantecato. The cod had been transformed into a very light, mousse-like paste and we enjoyed trying and failing to guess how it had been made. The revelation was that it had been beaten with oil, in the same way as one would make mayonnaise. “It’s very labour intensive” we were warned but on holiday in Spain with so much salt cod at our fingertips we just couldn’t resist having a go.

We bought pre-prepped fish to skip the soaking/water-changing faff part then pounded it up in a pestle and mortar with garlic and parsley. Oil was added in a steady stream while the other person emulsified furiously then, when we had a good thick mixture, a couple of tablespoons of milk was used to loosen.

It was a lot more rugged than the Polpetto version but the taste was definitely there; smeared on bread it was the perfect sunshine snack.

250gr salt cod, rehydrated. I think this involves a lot of soaking and changing of water over several days – we bought ours already soaked.
A pinch of salt – the salt cod once soaked isn’t super salty
1 fat clove of garlic
A handful of parsley
2 tbsp milk
A squeeze of lemon juice

Oil, for emulsifying (we used vegetable as that’s what we had to hand; groundnut would also work but don’t, whatever you do, use extra virgin olive oil as it will overwhelm the cod)

Simmer the cod in water for 5 minutes, then leave to cool. While warm, break into pieces as small as possible.

In a mortar and pestle, pound the garlic and parsley into a paste. Add the cod and mix vigorously. Roll back your sleeves and get pounding and smooshing as someone else dribbles the oil in, until you get a thick, smooth paste. It needs quite a bit of oil. Add just a squeeze of lemon juice, then loosen with the milk – add on tbsp at a time until it is incorporated – if you feel it’s necessary. Serve with toasted bread.