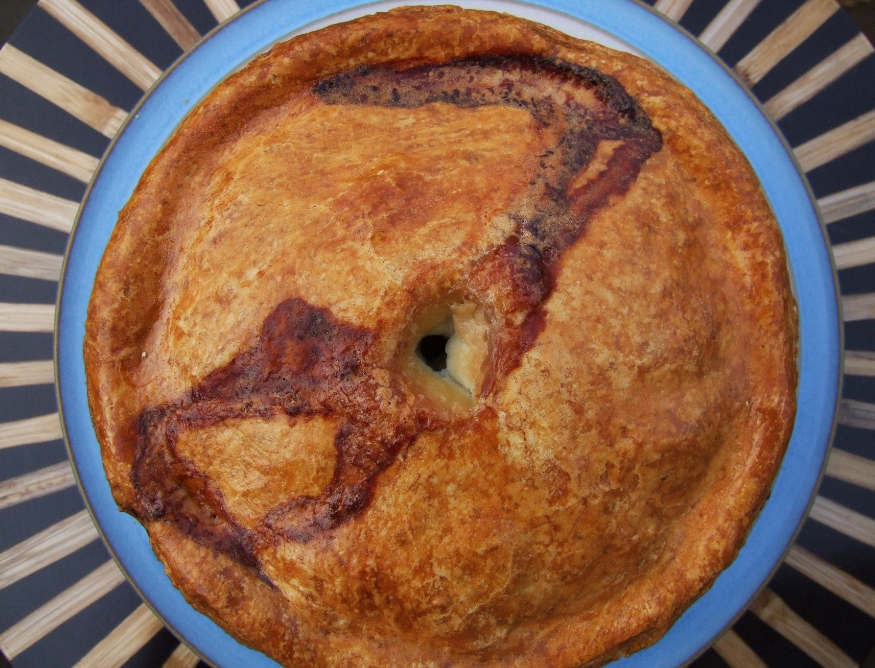 I am now officially 80% pork fat. My Dad reckons that the other 20% is made up of beer. Yet again I have stuffed myself to the button-popping threshold of what is socially and physically acceptable and gained more than I care to mention. It all started with this pork pie.

Every year mum and I have a Christmas cook-off – the entire day is spent in the kitchen churning out essentials such as sausage rolls, glazed ham, bread sauce and this year, an absolute monster of a pie. She was big, golden brown and stuffed with three cuts of pig. She was beautiful; bubbling and spluttering with porky juices as we sat there and actually watched her cook and yet, she would also prove rather tricksy.

First I had to contend with a smelly trotter. Worried I wouldn’t have time to pick one up back home, I boarded the coach with a previously purchased cloven hoof for my companion, but when I came down to making the stock, the thing seriously kiffed and had to go in the bin. I’d been sold a funky foot. Unable to find another, it was a very small hock which eventually came to the rescue; we simmered it as you would the trotter, with some bones, herbs and onion, and it made a stock which set to a rich savoury jelly. Phew.

Jelly crisis averted, things looked up with a hot water crust which came together easily despite the fact that the recipe in front of you reads contrary to everything you know about making any kind of pastry. Butter and lard are heated with water then added to the flour; it comes together into a very soft and pliable play-doh like ball, before being stuffed to the brim with three kinds of pork; 1.3 kg of diced shoulder, 250g minced belly, and 250g back bacon.

A proud little bay leaf preserved a hole through which to pour the jelly later, and she went in the oven for an hour and half, before coming out of the tin for glazing and going back in for a further 15 minutes to go all shiny. The re-heated jelly stock is then slowly funnelled into the top of the pie once cooled and, if you are unlucky like me, three hours later it bursts out the bottom. My mum discovered the pie on her way to bed, sitting in a clear pool of partly set liquid and, thinking it would make the pastry soggy (as would I), tipped the jelly away and crossed her fingers. In the end though, a pie that blew any shop bought version out of the water. At one point, we got so emotional that the pie was actually described as ‘resplendent’. Annoyingly, the jelly in particular was incredibly tasty; some at least was retained around the base and quivering gems studded the meat where the liquid had seeped into every available space.

I will be making another pork pie, certainly next Christmas, if not before. The meat inside was seasoned just how I like it, because obviously I made it; heavy on the white pepper, hints of mace, sage and thyme in the background. Most of all it’s full-on pork. The remaining jelly was savoured and a lesson learned: there is only so much pork one can ever get into a pastry case. You’ve just got to accept it. A big fat wedge made a very welcome addition to the ‘pork plate’ alongside my mum’s glazed ham with Cumberland sauce and a couple of crisp, buttery sausage rolls; pickles must of course be close at hand. A porky goodbye to 2009 and here’s to a slightly less porky me in 2010. Stranger things have happened.

I hope you all had a delicious Christmas too and a very Happy New Year!

(makes one absolute beast of a pie which fills an 18 or 20 inch cake tin)
It is easiest to start the pie the day before you want to eat it.

A few pork bones
A pig’s trotter or a very small hock
1 onion, halved and studded with six cloves
A stick of celery, chopped in half
Six black peppercorns
Parsley, thyme and bay leaves
Roughly 2 litres of water

Put all the ingredients in a pan and then gently simmer for 3-4 hours, skimming off any scum as necessary. Strain the stock then leave in the fridge overnight or until well chilled and set to a jelly. Scrape off the layer of fat on top and the stock is then ready to be re-heated. You will need about 250ml for the pie (don’t try to get any more in, trust me). The rest is a very valuable addition to your freezer.

The crust recipe I used comes from this site.

Melt the butter and lard with the water over a gentle heat. Meanwhile, mix the flour with the salt in a large mixing bowl then add the eggs. Use a knife to start cutting it together as you normally would when making pastry. Begin adding the melted fat and water mixture a little at a time until it starts to all come together like this. Then go in with your hands and bring it together into a ball. Knead very briefly until smooth then wrap in cling film and refrigerate while you make the filling.

First, finely dice the pork shoulder, removing any sinewy bits. I went for quite a coarse dice, about 1/2-1cm square. Then finely dice the bacon too and mix all three meats together in a large mixing bowl. Add the rest of the ingredients and combine well. Take a little bit of the mixture and form into a small patty about the size of a 50p piece, then cook in a frying pan to check the seasonings and adjust to taste as necessary.

Preheat the oven to 180C. Cut off a third of the pastry and set aside for the lid (back in the fridge), then roll out the remaining two thirds on a lightly floured surface. You want a circle big enough to cover the base and edges of your cake tin. Mould the pastry into the tin, making sure that there are no gaps, then stuff with the filling. You can pack it down well as it will shrink during cooking, leaving room for the jelly.

Roll out the remaining pastry to make the lid and brush the sides of the pie with beaten egg before putting the lid on top and crimping and sealing well with your fingers. Use a bay leaf to make a hole in the top of the pie and bake on the centre shelf for 30 minutes. After this time, reduce the heat to 160C and back for another hour. Then remove the pie from the tin and brush all over with beaten egg before baking again for 10-15 minutes.

Leave to cool for 30 minutes before removing the bay leaf, then re-heat 250ml stock and slowly funnel it into the top of the pie. This takes some time as you have to do it bit by bit. Allow to cool completely and refrigerate to allow the jelly to set completely.