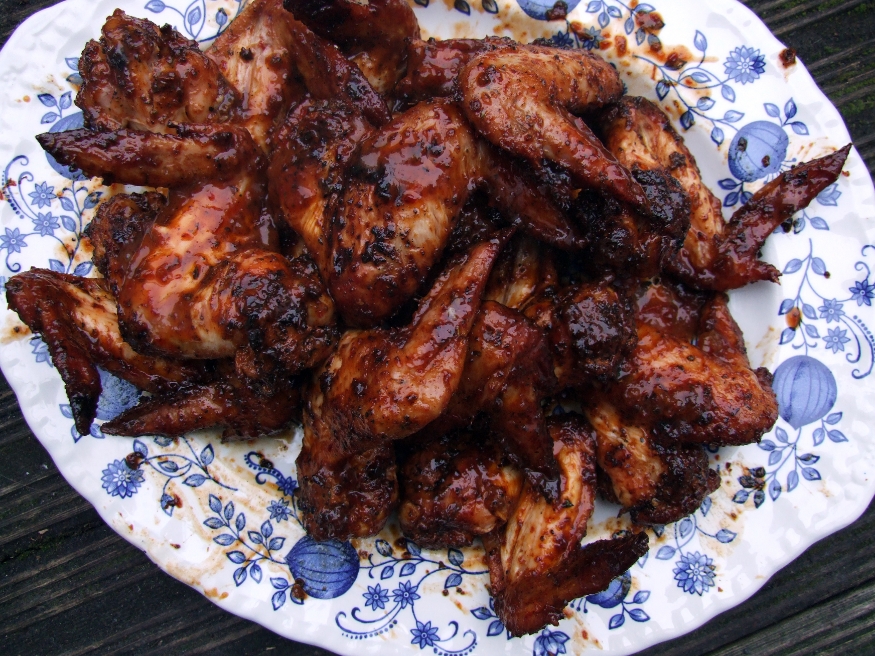 Last weekend I decided on a whim that it was, without a doubt, the official start of BBQ season. It was a beautiful day and we flung open the doors on to the balcony, letting sun stream into the flat, fired up the grill and had a bunch of mates over to devour what I rather modestly titled a ‘Mexican Feast’. We ripped through a mountain of tacos, piled with slow-cooked pork with blood orange and chipotle plus about seven different salsas, guac and sour cream (got carried away) followed by chocolate mousse sprinkled with honeycomb. To start, it was a big pile of these wings, which we set upon like a bunch of feral animals.

When cooking wings on the BBQ, there’s always the question of how to get the skin nice and crisp (i.e you’re not deep-frying them). I spent a lot of time last year cooking chicken wings, a LOT of time, and I found that even 40 minutes over indirect heat can sometimes leave them a little flabby of skin. Recently however, I discovered a new method via Serious Eats. A new method! Joy! The meat is treated in a mixture of salt and baking powder, then suspended on a wire rack over a dish in the fridge. This needs to happen for at least 8 hours, preferably overnight. I also added dried oregano (on the Mexican vibe) and some Old Bay Seasoning.

The wings don’t really look that different in the morning, but when they’re cooked over indirect heat on the BBQ for about 45 minutes, they go all sort of dry and weird looking. I was a little worried at that point.

They’re then doused in the sauce and flashed over direct heat to caramelise and char. It turned out I needn’t have worried, as the result was the crispest skin I’ve ever achieved on a BBQ and some juicy meat within; the wings are so fatty that they can be cooked for ages without ever drying out inside. The sauce is a mixture of smoky spiced chipotles in adobo (that’s smoked jalapeño chillies in a sweet sauce) which I was kindly sent by the Cool Chilli Co. but have also made at home with much success. They’re incredible and will add smoky intensity to many dishes. I used quite a lot in this recipe which gave the wings a good kick of heat. Balanced with plenty of honey they were super sticky too, cut with the tropical astringency of lime juice.

They’re so good I just made another batch yesterday and I’m making a third next week for a mate’s birthday. The buzzing heat of the chipotles builds with every wing, yet is numbed by the sweet honey, making for an addictive cycle which makes you go back for another and another and another. Have plenty of kitchen roll handy.

Makes enough for 15-20 wings (depends on their size really)

3 heaped tablespoons canned chipotles in adobo (the ones I had were from Cool Chilli Co. and were chopped up in the sauce, in contrast to the ones I’ve made at home/bought before)
1 tablespoon chipotle ketchup (optional)
50g melted butter
Juice 2 limes
5 tablespoons honey

You will also need a handful of hickory wood chips, for smoking.

Start this the day before you want to eat. Mix all the ingredients for the rub together. Pat the wings dry then cover them with the rub, making sure to massage it in to each wing. Spread the wings out on a rack (I used a cake cooling rack) and suspend this over a baking dish or other large flat dish, so that the dish can catch any drips and the air can circulate around the wings. Refrigerate the wings but don’t cling film them, as they need exposure to air.

The next day, make the sauce. Melt the butter then add it to a blender with all the other ingredients and whizz until well combined.

Fire up your BBQ and set up the coals for indirect cooking (by which I mean wait for them to turn white then move them across to one side of the BBQ). Place the wings skin side down on the side of the grill that is NOT over the coals, throw your soaked chips into the coals, then put the lid on and cook for 20 minutes. After this time, turn the wings and cook for another 20 minutes or so (with the lid on).

After this time, douse each wing in sauce then return to the grill, this time OVER the coals; this is to get some char on each wing and caramelise that sauce. This takes about 15-20 minutes.

Once the wings are good and caramelised, you may want to douse them in any remaining sauce.