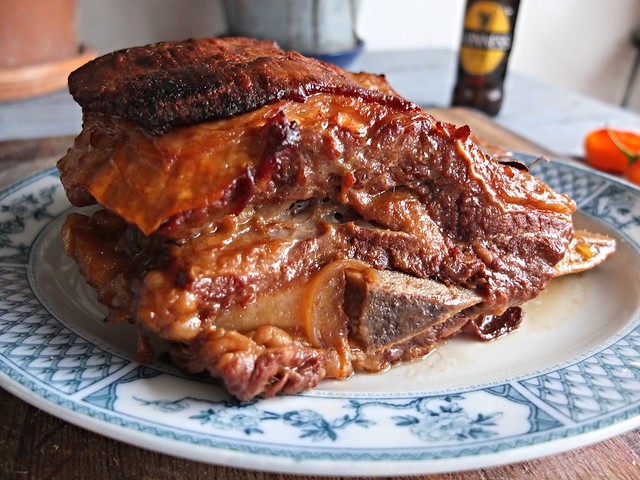 I’ve been away a lot recently. That’s been great fun, of course – Australia in January, then San Diego last week – and I’ve eaten loads of things I can’t wait to write about. Today though, all I wanted was the flavour of home. The weather here is, of course, pissy, which was a bit of a shock after the whispering rustle of palms and cloudless California sky. I needed something slow braised and stodgy. 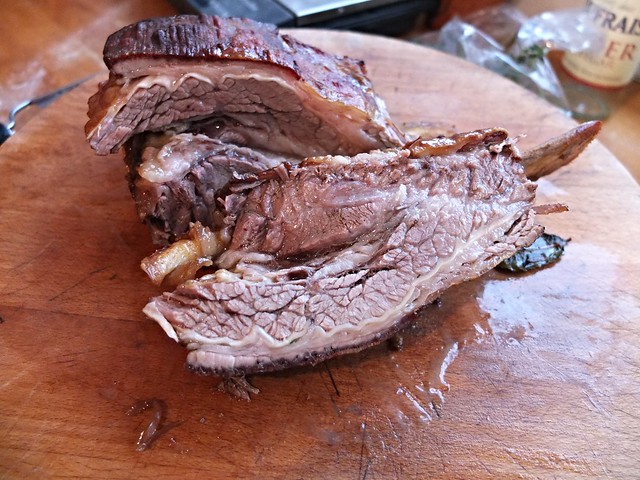 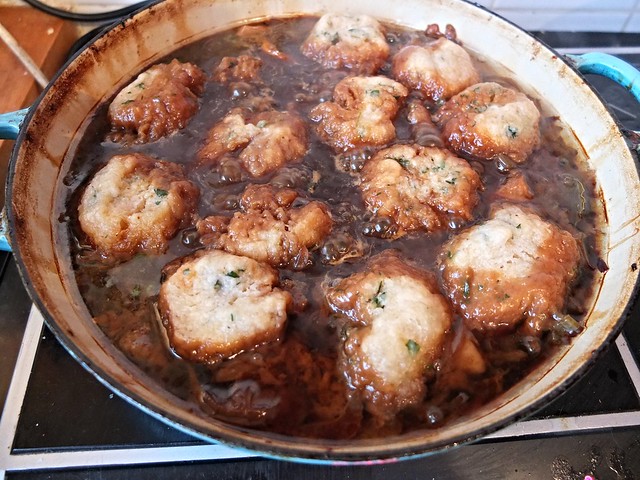 Every now and then I like to get a whacking great thonk (totally a word) of meat and cook it ‘Peckham style’ which means slow cooking it in stock turbo-charged with export strength Guinness (have you ever got drunk on that stuff? Like drinking psychoactive treacle then waking up the next day with no memories but an overwhelming sense of creeping doom), scotch bonnet chillies, allspice, and some other bits and bobs of Rye Lane origin. The result of this is a sweet and sticky sauce, meat which just gives up saying “damn, this is some tasty liquor, you deserve the imminent breakdown of all my connective tissues” and a really pleasing rumble of bonnet spice (just pierce them for the love of Del Boy, don’t chop them up or you’ll have a literal shit storm on your hands).

Dumplings are a must in this weather, so we made some with thyme. Well, I say ‘we’ but the truth is that I basically dictated this recipe from my sick bed, because I am being quite rightfully punished for all the fun I have had in the past six weeks. Seems fair. We had a pickled cabbage salad sort of thing on the side – a recipe which I doctored from this original on Smitten Kitchen – the changes are listed below. It’s a perfect accompaniment if you’re cooking this kind of full on big balls braise. Oh and there was some cavolo nero, because that’s always nice, isn’t it. 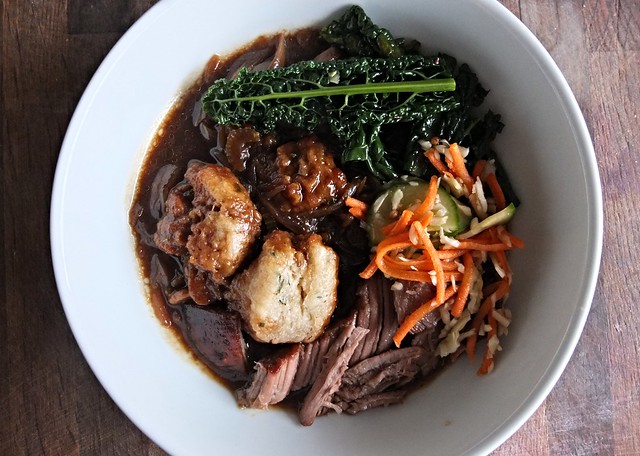 Preheat the oven to 160C

Cover a plate with flour, season it with salt and pepper, and put the ribs on it until they’re all coated. Heat a big, oven-proof, lidded casserole pan (large enough to fit the ribs and all the liquid – sounds obvious but we’ve all done it), then add some oil (veg, groundnut, not olive) and brown the ribs. Set them aside.

Whack a splash of stock in the pan so it bubbles up and use something not too scrape-y to get all the nice meaty bits up off the bottom, then chuck everything else in, so your onions, celery, garlic, ginger, spices, chillies, bay leaves, Guinness and enough stock to top it right up. Save the rest for topping up throughout cooking.

Put the lid on the casserole and cook for 3 hours, turning every so often if the ribs are poking out a bit.

After this time, remove the meat and skim a bit of the fat from the top of the sauce. Then you can make the dumplings…

For the dumplings (makes 12)

Mix the suet, flour and thyme lightly together, season with salt and pepper then gradually add enough water to bring it together (it won’t take much). Give the mix a brief knead until it’s a good mass then roll into 12 balls. Drop these into the sauce (I cook this bit on the hob), put the lid on and cook for 10-15 minutes.

For the pickled cabbage salad (this is from Smitten Kitchen – I have converted the measurements, ditched the red pepper, added coriander seeds instead of celery, reduced the amount of sugar and used cider vinegar instead of white)

Mix sugar, salt, coriander seeds, vinegar and water in a bowl until sugar and salt are dissolved. Mix with the veg and leave for at least an hour.