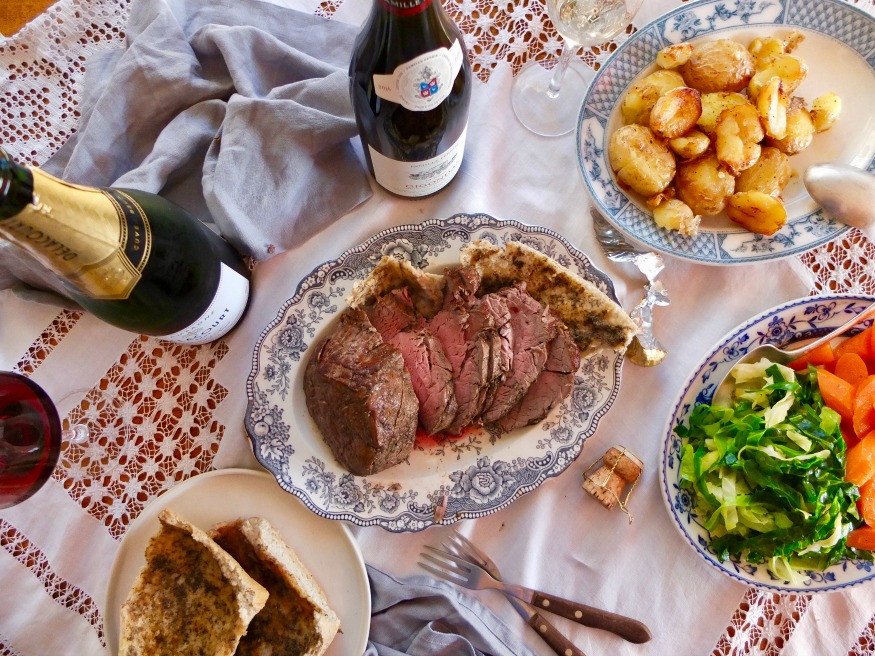 This recipe was developed as part of a paid partnership with Marks & Spencer.

I used to find the festive season quite difficult. It raised my anxiety levels which, to be honest, are pretty much consistently set to gnarly anyway. I know some people have a terrible time at Christmas but I think many of us have a sort of mid-level stressy time. I’ve learned to enjoy myself more by employing a cluster of coping strategies and one of them is taking a deep-dive into the festive food pool.

Entertaining a group of pals is part of the fun but I think we’ve all been in a situation where that too becomes more of a hair-pulling exercise than the free and easy social event it should be. I’ve definitely come a cropper thanks to an overly ambitious menu, spending the whole morning freaking out when I should be prepping a relaxed lunch with a glass in my hand. It is very easily done.

So this recipe is all about serving something a little bit different without giving yourself too much to do. I know it seems daunting baking something in a salt crust but it’s just a case of timings which I’ve already worked out for you. To remove any element of doubt use a probe thermometer – you can poke right through the crust with no issues.

M&S got in touch asking me to create a recipe using ingredients from their food hall as they’ve just opened a branch near me in East Dulwich. We’ve all done a mad dash around one on the way home from work but I was amazed at how much they stock after having a good root around for ingredients. I should say however that the fillet of beef I’ve used here needed to be ordered in advance via their website as it’s larger than the fillet steak they normally keep in store, so do bear this in mind as it took a few days to arrive. 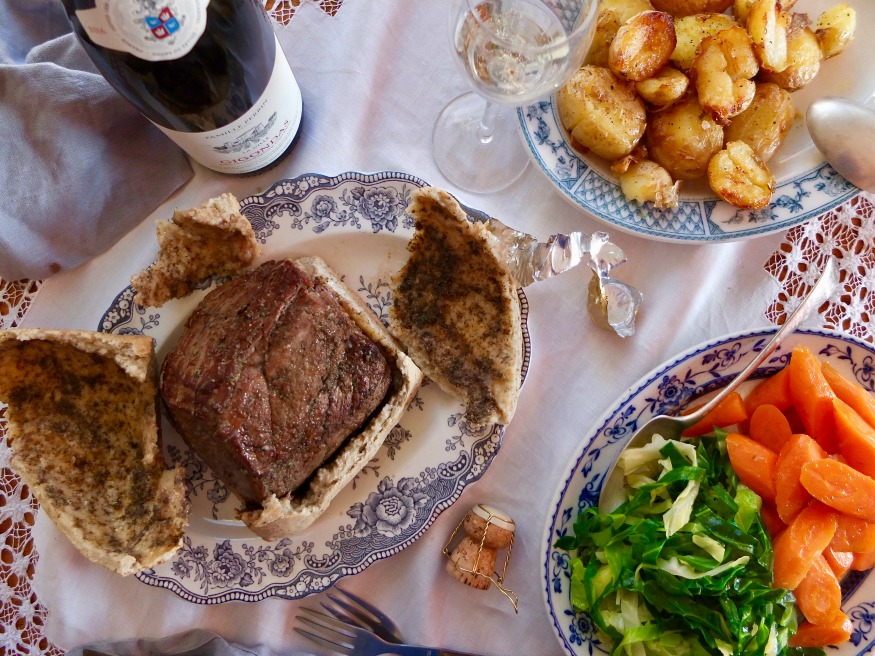 Why cook something inside a salt crust at all? Well, it’s fun and dramatic at the table as you crack it open and the fragrant steam puffs forth. Whatever flavours you choose to rub onto the meat are trapped inside and the salt from the crust seasons everything beautifully. You’re probably more familiar with cooking fish this way but it’s fun to try with meat, I think, and I’ve had great success with a salt crusted leg of lamb too.

I rubbed the beef with dried mushrooms and pepper but you could use a combination of woody herbs like rosemary and thyme or pretty much anything, to be honest. I await your reports of freeze-dried raspberry rubbed beef with great anticipation. On the side, I served some potatoes roasted simply with lots of olive oil and salt (parboil, lightly squish and roast with 6 tbsp oil and 2 tsp salt at 180C for 20 minutes) plus buttered greens, carrots and prepared horseradish from a jar. We drank M&S Delacort champagne while cooking, which is impressively rich and biscuity for £35 – it’s great value and would also go very well with my crab vols-au-vent. With the beef, we drank a Gigondas from Perrin Pere et Fils (also from M&S) –  a wintry wine with spicy red fruit and plenty of body yet soft tannins which won’t fight against the fillet.

So there we go – maximum impact, minimal stress. What will I salt crust next?

You will need a probe thermometer for this recipe.

Make the crust by mixing the egg whites, salt and flour. When smooth (apart from the rocks of salt) wrap in cling film and put in the fridge for 20 minutes.

Remove the beef from the fridge (don’t let it come to room temp first). Heat a little oil in a heavy-based skillet or frying pan and sear the beef really well on all sides to get a nice brown crust on it because you won’t get the browning from pan cooking as usual.

Wrap the beef in foil then set it aside for 15 minutes. Blitz the porcini mushrooms and peppercorns to a powder and rub it all over the meat.

Roll out the salt crust, remove the foil from the beef and lay it on top then wrap the salt crust around it, sealing the edges. Make sure the seal is on the bottom.

Remove the baking tray from the oven and put the beef on it. Cook for 18 minutes then probe it – you are looking for a temperature of 46C for rare meat (obviously pop it back in if it hasn’t reached that temperature). Once it is 46C remove it from the oven and let it sit until it’s 50C, around 4 minutes. Carve it right away at the table as the beef will keep on cooking inside if you don’t.