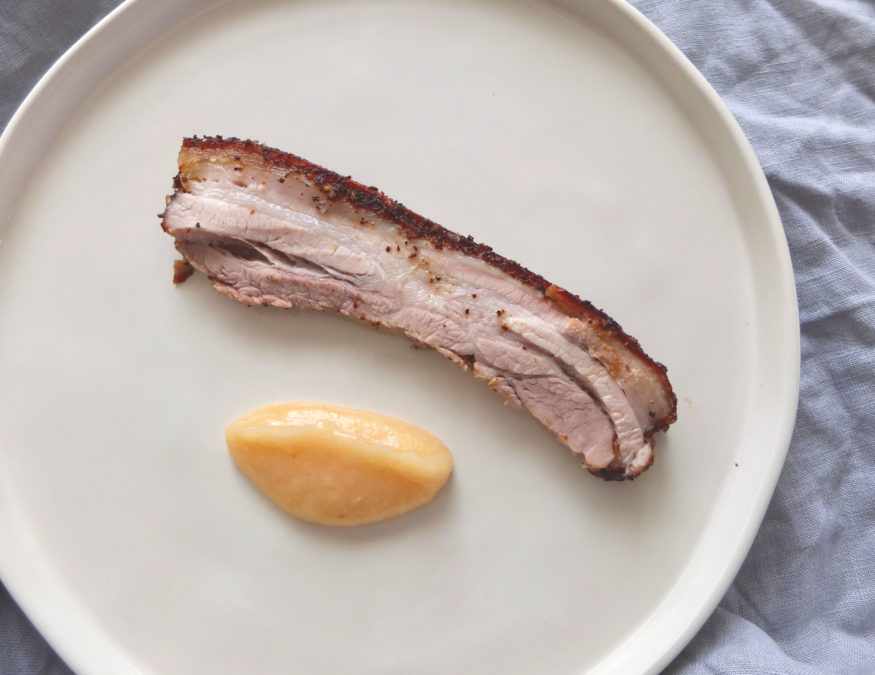 You can forget your apple sauce, pal – quince and scotch bonnet is where it’s at. I’ve combined them in a hot sauce before but this is more of a quince mush with chilli in it, which is a lot nicer than I’ve just made it sound. It’s a fruit sauce for pork, south London style. The quinces we bought in Peckham’s General Store and the scotch bonnets well, they’re everywhere. Colourful little buggers.

The pork is rubbed with scotch bonnet powder so the crackling and outer meat is spicy too but you could just roast it simply with salt. This reduction in overall heat will also help with the problem of what to serve on the side. Vegetables make sense but the carbs are trickier. The first time I made a sort of spiced pilaf which took things off in another direction entirely and we’ve also had it in baps with mustard and a cabbagey ‘slaw like a spicy hog roast.

Anyway, it’s a very fun thing to do with quinces which are at their fragrant, knobbly best right now. Snap ’em up in the shops or – ideally – steal them from someone’s garden. They may even give them to you! I dunno. Things like that mainly happen outside of London.

1.6kg piece pork belly (or thereabouts) cut from the meaty shoulder end, with ribs attached (this is just my preference because then you get the tasty ribs as well)
2 tablespoons sea salt
2 tablespoons scotch bonnet powder (I buy this in Peckham but you can also buy online)
2 large quinces
1 fresh scotch bonnet chilli
2 tablespoons honey
1 tablespoon lemon juice (plus a bit extra for prepping the quinces)

If you have the pork belly the day before, pat the skin dry, score it, then leave it uncovered in the fridge overnight to dry out. If not, just pat it dry then score it. Remove any tough white membrane from the top of the rib section.

Mix the salt and scotch bonnet powder (if using) and rub this all over the pork belly. Place it on a rack in a roasting tray and roast for 20 minutes.

Turn the oven down to 140C and cook for 1 hour 20 minutes, then whack it back up to 220C for a final 20 minutes. This should give you great crackling.

For the quince sauce, peel and stone the quinces, cutting them into segments – you’ll need to pop them in some water with a squeeze of lemon juice in it while you do this, to stop them turning brown.

Cover them with water in a saucepan and add the scotch bonnet (leave it whole) and the honey. Cook until soft, around 1 hour. Remove the chilli and drain. Blend the fruit and stir in the lemon juice. Season with salt. Serve with the pork!