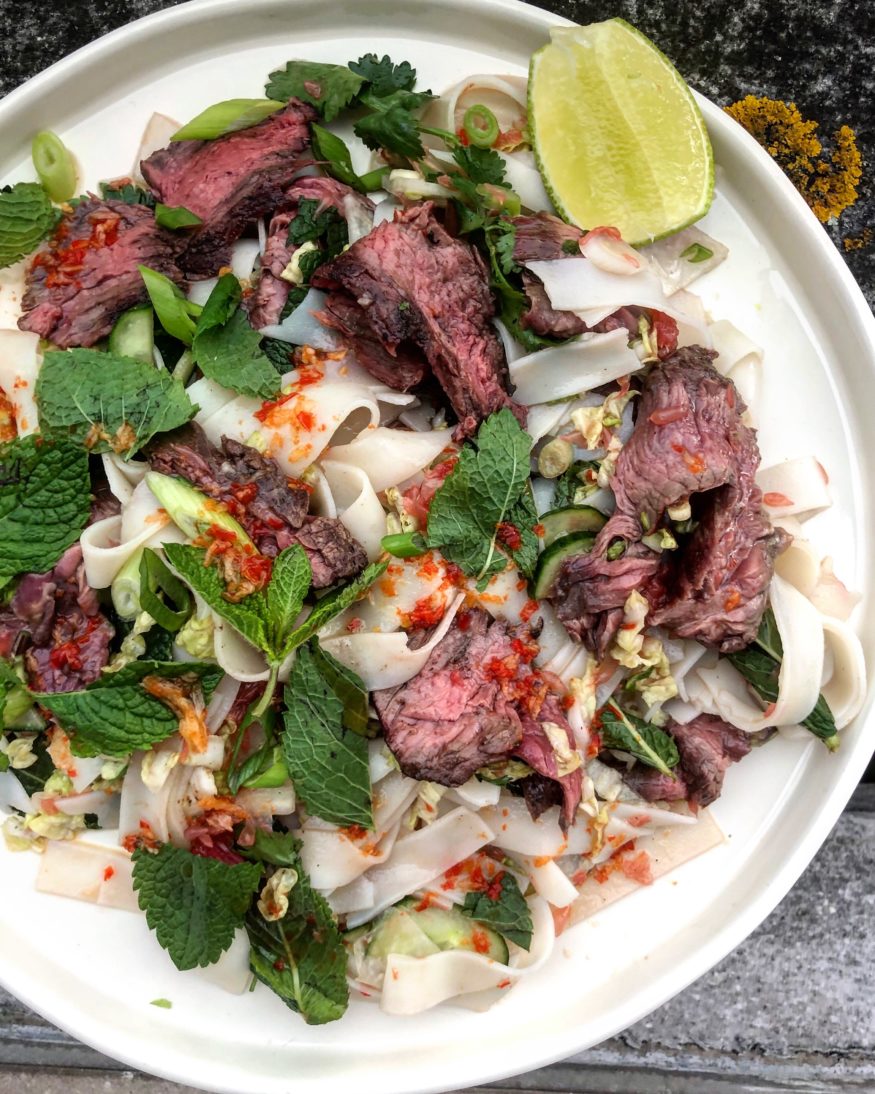 I seem to go through all or nothing phases with this website; a flurry of new content and then silence for a month. The fact I’m still sharing recipes after 12 years must count for something though, right? Just think of me now as a cantankerous old vending machine in need of a kick every now and then to get the Coke out.

I’m very into rice noodles (and soba, come to think of it) once the weather warms up. It’s gloomy today in London but the weather has generally settled into the sweet mid-20’s spot which is pretty much perfect as far as I’m concerned. You can keep your 30C+ until this city gets air-con.

I’ve always got the barbecue lit at this time of year, and we had a piece of really good onglet to put on it. Onglet wants to be cooked quickly and sliced thinly across the grain – this will leave you with just the right amount of chew. Sliced too thicky it can become a real jaw workout. The flavour is incredible, and it’s very inexpensive compared to the swaggering ribeye.

I made a dressing from a pounded scotch bonnet (hi, still me!), garlic, grapefruit juice, lime, honey and fish sauce – the kind of salty/sweet/sour/hot thing that gets me excited during the warmer months. Loads of crunchy veg and roughly torn herbs and you’ve got a pretty amazing dinner. This recipe serves four but we ate it between two followed by Double Caramel Magnums because we are greedy and not even the heat seems to affect my ferocious appetite.

It helps if you have everything ready before you cooking the onglet unless you are fast at prepping. So make the dressing and chop the veg while you are waiting for the barbecue to be ready.

Prepare the barbecue for direct cooking.

Make the dressing by pounding the chilli and garlic to a paste in a pestle and mortar. Stir in the grapefruit and lime juices, fish sauce and honey. Taste and adjust until you have a good balance of hot/sour/salty/sweet – this depends on the sweetness of your fruit and heat of your chilli.

Once the barbecue is hot, season the onglet heavily with salt and less so with white pepper, then grill for 2-3 minutes each side. Set aside to rest for at least 10 minutes.

Cook the rice noodles by covering with boiling water and leaving for 6-8 minutes (or according to instructions on the packet).

Once the noodles are cooked, drain and mix with half the dressing. Slice the onglet very thinly and add to the noodles with the vegetables, grapefruit and herbs. Plate up and finish with the remaining dressing.