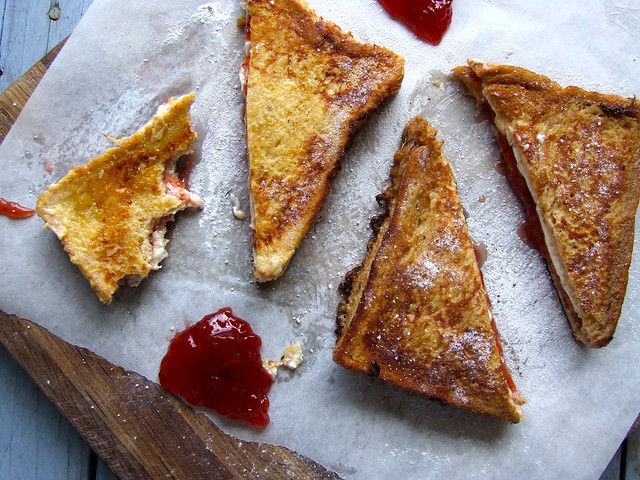 I’m really sorry about this, but I have to post it before we all go over the edge into healthiness and abstinence for the rest of the month.

The PKoW (yes) is a group of retired military officers, paid to doss about at Windsor Castle officiating ceremonies and the like for The Order of the Garter. Thanks Wikipedia. What? Did you expect me to go The British Library or something?  Not going to happen. I’ve got a boiling sprout-water related injury on my foot, for a start.

PKoW is also another name for eggy bread (French toast, pain perdu) but I can’t for the life of me find out (from my arm chair) when or why it became the name for this sandwich. Perhaps it just refers to the bread, which is dipped in egg and fried in butter a la Eggy B. The red jam does add an extra military flair, I suppose.

Anyway, it’s a cream cheese and raspberry jam filling. Health. The whole thing is then, as mentioned, dipped in an eggy milk mixture and fried in butter, dusted with icing sugar, and served with more jam and a referral to a diabetologist.

A warning – this will ensnare you. I kept going back for another bite. Slightly salty, sweet…FRIED IN BUTTER.

Beat the icing sugar with the cream cheese until well mixed. Spread the cheese over two slices of the bread and the other two with half of the raspberry jam.

Close the sandwiches with the other slices of bread.

In a shallow bowl, combine the eggs and milk. Melt the butter in a frying pan. Submerge the sandwiches in the egg mixture, making sure they soak it up for about 30 seconds on each side, and then fry in the butter until golden brown.

Dust each with icing sugar and serve with the remaining jam.