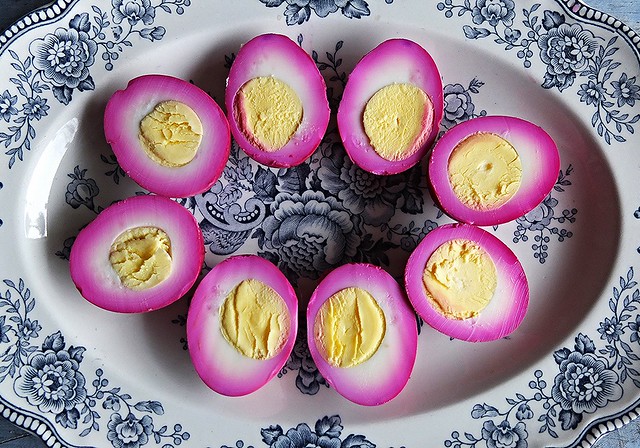 Like most British people of a certain age I have two memories of pickled eggs. The first is the giant jar on the counter in the chippy, ghostly blobs suspended in liquid turned murky from too many spoons dipped inside. I used to be terrified of that jar, until I actually tried one. Then, I was hooked. Fish and chips was no longer acceptable unless I got a face full of egg and vinegar guff when I unwrapped the paper. Not tempting you? Weird.

The other memory of course is of a similar jar behind the counter at a certain type of boozer. A pickled egg, dropped into a pack of crisps, then shaken about, was one of the best beer snacks of all time. People are pussies nowadays with their quail scotch eggs and house made ketchup. Same goes for your delicately puffed pig skin served with apple sauce in ramekins. Give me a proper pork scratching with a layer of soft fat underneath and a tooth-breaking top, possibly sporting a couple of proud bristles.

So this is my recipe for pickled eggs. In the spirit of those memories I’ve kept it fairly traditional but for the addition of a beetroot because it turns the eggs pink inside and who doesn’t want a trippy egg? There’s chilli too, because I just went to Mexico. Okay so it’s quite a modern pickled egg, but I can’t stink of chip fat and stale pints forever. 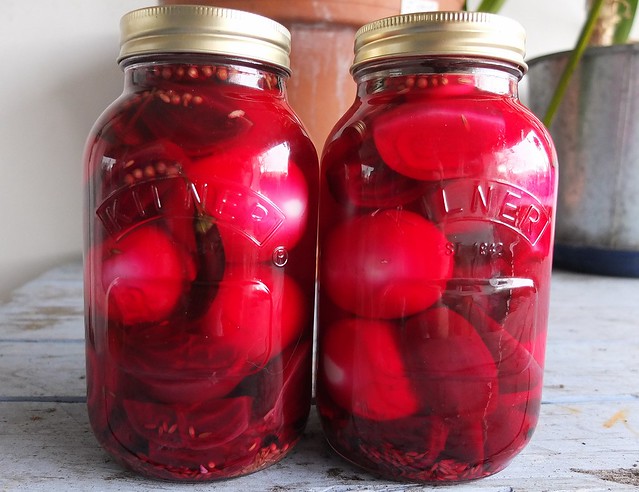 I wrote this recipe for the Better with BRITA campaign.

Cook the eggs until hard boiled (place them in cold water, bring to the boil and cook for 7 minutes).

Mix the liquids, sugar, salt and spices together and simmer for 10 minutes.

Stack the peeled eggs, beetroot quarters and onion slices in sterilised jars then cover with the pickling liquor. They will be ready to eat after two weeks. Store in the fridge.