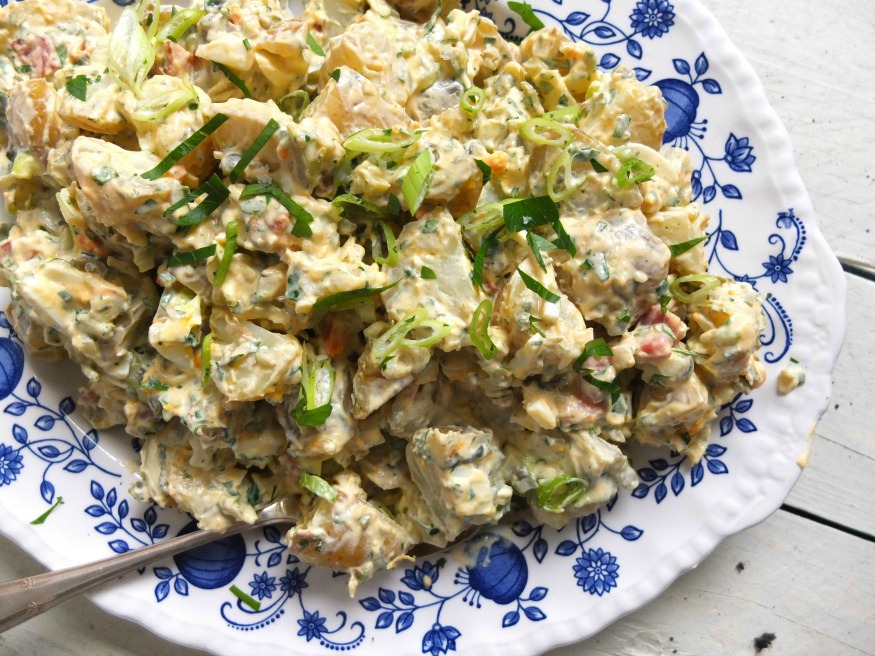 I can mark stages of my life with different versions of potato salad. In teenage years it was all about those pots of uniform, factory-diced potatoes in mayonnaise. We used to get drunk, then nip into the Co-op before it closed to clear their shelves (cheeky Ginsters cheese and onion slice on the side, thanks). There was something very comforting about those cold, salty cubes in their bland coating; it was just oily carbs in a box and we were okay with that.

Then I started cooking and was amazed at how the freshly cooked potatoes with a bit of Hellman’s lobbed in was just so much better than the claggy boxed stuff. A handful of fresh parsley or dill on top of the still-warm spuds and OMAFG it was a life-changing experience.

Additions came next. What would happen if spring onions got involved? Or chopped bacon, its fat still sizzling? I remember discovering the German style of potato salad, a magnificent mixture of chopped gherkins, mustard, and herbs, and I became fond of a variation using salami, fried in a pan until crisp. Might have to re-visit that one.

In recent years everyone seems to have rejected mayonnaise (or any creamy dressing), so the potatoes might come with a shiny glaze of olive oil, a flutter of herbs, perhaps some mustard or cress. Very Jamie Oliver. I dunno if this qualifies, though. I mean, it’s just a dish of potatoes, isn’t it? Potato salad needs to feel like a guilty pleasure. 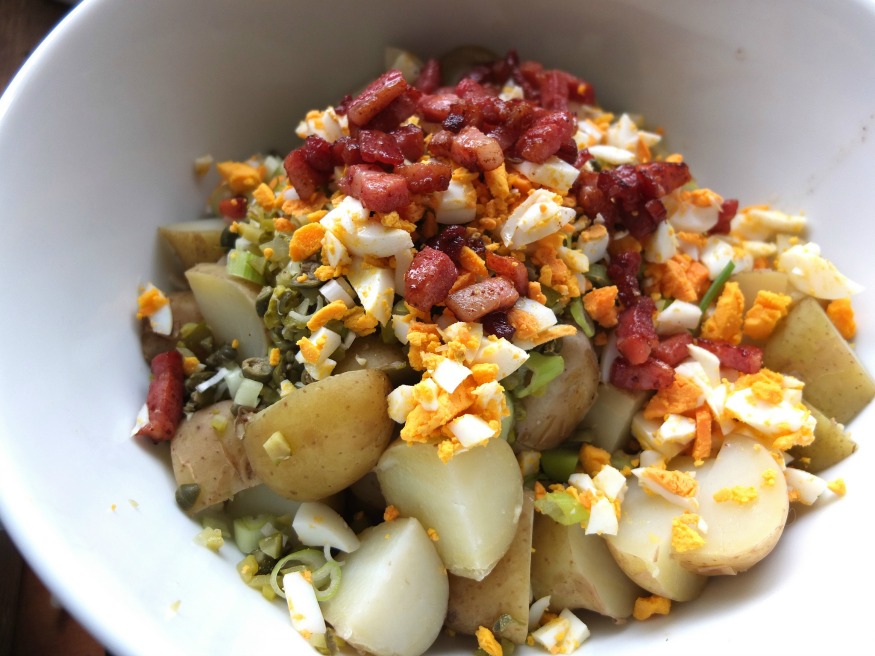 Often now, I use mayonnaise + yoghurt for a bit of sharpness, chives and parsley, lemon and maybe a clove of garlic that’s been boiled with the potatoes. It’s a halfway point between classic and modern. Sometimes, though, all-out is the only way. This is a kitchen sink recipe, which could be adapted depending on what you have knocking about.

The reason I’ve called it mind-bending is because it has chopped hard boiled eggs, which combined with the creme fraiche create a sort of egg mayo vibe. That’s a melon-twister. Still, egg mayo and carbs go together very well indeed, as we all know. I then added bacon, chopped gherkins and capers, spring onions, parsley and a dressing made with creme fraiche and mustard.

There is nothing restrained about it but it is a lot of fun. Rich and salty with pops of acidity, it’s full-on but not overwhelming, thanks to the creme fraiche; the flavour of the Jersey Royals still comes through. Would I eat this version every time? No, but then I have at least four other styles to choose from.

Boil the potatoes in salted water until just cooked, then drain and run under cold water to cool a little. Fry the bacon until crisp and hard boil the eggs, then peel and chop.

Mix the creme fraiche, mustard, garlic, lemon juice and some salt and pepper in a bowl. Mix the potatoes with the bacon, eggs, spring onions, capers and gherkins. Add the dressing and herbs and mix again, gently. Taste for seasoning and add more salt and pepper if needed.