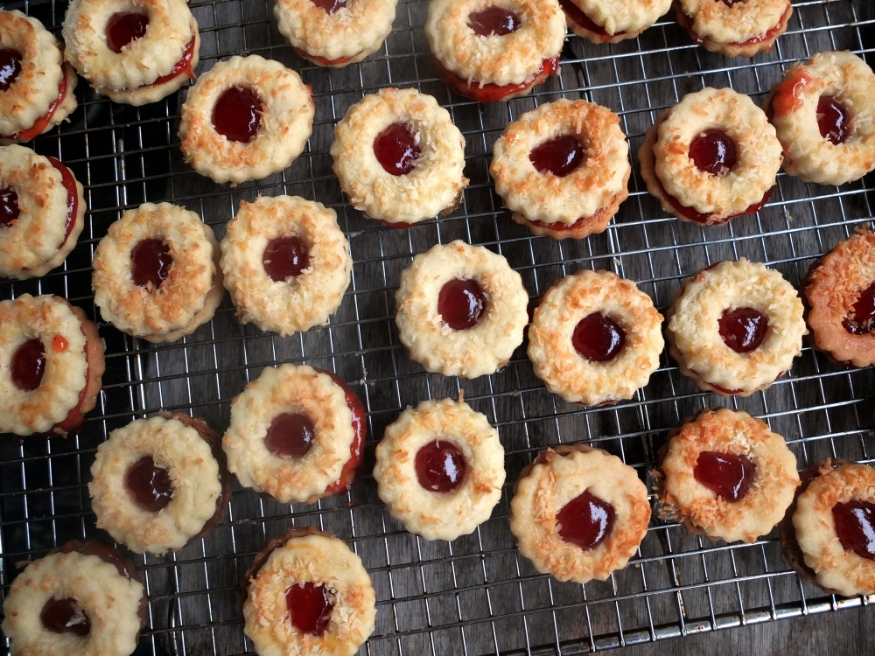 Okay so I know I swear a fair bit on this blog but the title, it’s just so BIG, you know what I mean? Couldn’t bring myself to do it.

You may have gathered that I’m not much of a baker. Every so often however, needs must, or I feel I kind of want to perhaps make something because I know someone else will appreciate it. My colleague left this week, to go on to do something she has worked very hard for and to congratulate her I thought come on, Gravy, pull the stops out love, it’s time to get baking.

Jammy dodgers. They’re just cool, aren’t they? Old school, now, which obviously makes them doubly cool. How hard could it be?

Really bastard hard, as it turns out. Well, perhaps not for the rest of you, who turn out biscuit after perfectly golden biscuit but for me, a person who couldn’t even cook a vicky sponge without having a quick glance at the quantities first, well, it was a ball ache, to say the least. 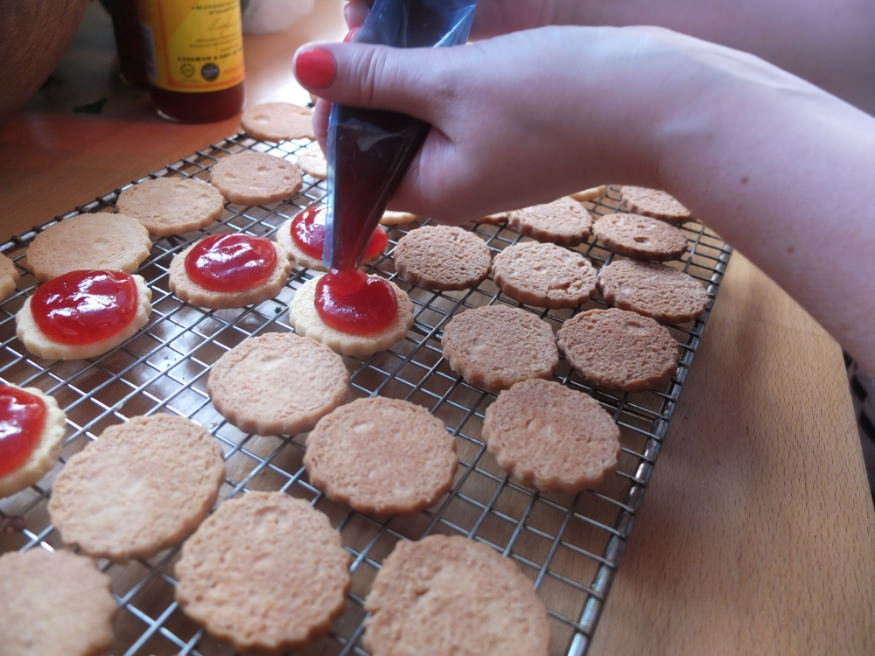 I decided that none of the recipes online had enough butter in them, because it’s a good idea to start changing the ratios of baking recipes if you don’t know what you’re doing. When the mixture wouldn’t come together I flew into a panic and thought it might be a good idea to ask my friend (who used to be a pastry chef at a really famous and stupidly expensive restaurant) for advice. Turns out that by sheer luck the ratios weren’t far off, so I persevered.

Not content with doing just regular jammy dodgers, I decided I would dust the tops of mine with coconut. Except I couldn’t decide when this should be added. At the beginning? Halfway through? How would it stick? I decided to egg wash and sprinkle the coconut on halfway through. Why would anyone do that unless they are an utter imbecile? Obviously the egg wash cooked as soon as I brushed it on, what with the biscuits having been in the oven at 140C for the past 7 minutes. I mean, FFS. What is it that happens to my brain when it comes to baking? I blame the blind panic.

I started to put the wash on pre-baking, and the biscuits were looking better, at which point my pastry chef mate turned up. ‘They look good’ he said, commenting on the latest batch and, relatively, they did. On the way out, he stopped to assess the cooled biscuits and asked me if I had any jam.

Him: “How are you going to put the jam on there?”

Me: “Any which way I bloody can. Why is my wine glass empty?”

Him: “I’m going to get you a piping thing (yeah okay so he called it something else), I’ll be back shortly.”

Me: “You don’t need to do that; it doesn’t matter”

And that is why he was a pastry chef and I stick to cooking things that don’t involve sugar.

He arrived with a pointy bag like a magician’s hat which I used to cack-handedly squirt jam onto the biscuits. Still, that’s baking out the way for another year, eh? And you know what? They were pretty damn good in the end. No idea how it happened. They’re soft, more like the spawn of a  jammy dodger and a melting moment than a regular dodger. That may well be down to the almonds and the entire pack of butter that I used. I’ve really no idea.

(makes approx 60 biscuits using a 4cm cutter. Well, it made 50 for me but it would have made 10 more if I’d not just abandoned the last batch)

Put butter, sugar, almonds and flour into a food processor until it comes together into a ball. If the ball doesn’t come together, add a little more flour. Whack it in the fridge for an hour.

Knead it a little bit until it’s smooth enough to roll out. Divide it into two equal pieces. Roll one piece out on a lightly floured surface until it’s about 1/2cm thick. Cut out as many circles as you can, re-rolling as necessary. Bake these for about 15 mins, or until golden. Leave to cool on a rack.

Roll out the second ball to the same thickness then use whatever means necessary to get a hole in the centre. I used the end of a sausage stuffer attachement. Just be resourceful. Doing it with a knife is a complete pain in the arse. Brush with egg white, sprinkle with desiccated coconut and cook for about 15 mins until golden. Allow to cool.

When the biscuits are cool, warm the jam a little in a saucepan, just until you can dip your finger in it and it is warm, not hot. Either spread or pipe your jam onto the bottom biscuits, and sandwich the coconut ones on top. Leave to set.