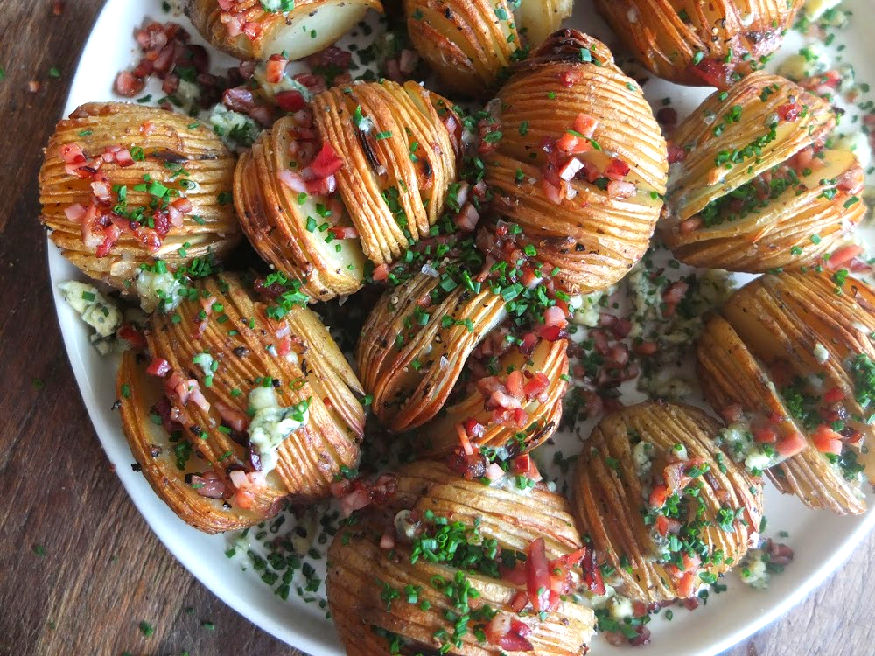 I first came across hasselback potatoes on American food blogs, years ago now. Thing is, it’s actually a Scandinavian recipe named after the restaurant Hasselbacken in Stockholm where they were invented (I’d always thought it was something to do with their backs being all ‘hassled’ by cuts*). The keys to their success are firstly the cutting and roasting technique and secondly, the application of a serious amount of butter.

With creamy innards and lots of crisp edges on top, this recipe delivers pretty much everything you want from potatoes in one package. Like many cooks, I season mine heavily and slip garlic in between the slices but it’s fun to go a step further occasionally – here I’ve topped them with crumbled Stilton, bacon and chives.

It occurred to me that these would make fantastic party food so I’m sharing the recipe. It’s simple, almost impossibly delicious and looks festive to boot. Job done mate.

Cut slices 2mm apart 3/4 of the way through each potato.

Melt the butter with the olive oil. Place the potatoes in a roasting dish and push slices of garlic into the slits, making sure they are pushed right in, or they will burn. Pour the butter and oil mixture over the potatoes and add 100ml water to the dish. Turn the potatoes over to make sure they’re well coated. Season heavily with salt and pepper.

Bake for 1 hour 30 minutes, basting with butter every 10 to 15 minutes, or until they’re tender inside and golden and crisp on top. Don’t skip the basting.

During this time, grill or fry the bacon until very crisp, then chop finely. I then re-crisped mine in a pan.

Once cooked, serve sprinkled with the bacon bits, crumbles of blue cheese and snipped chives. You can also serve drizzled with more butter from the pan. Why not?