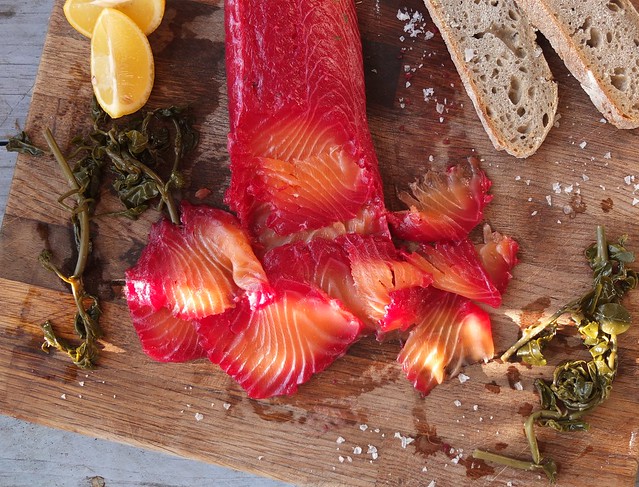 I’ve long been of the opinion that salmon is best eaten either raw, cured, or smoked; it just has such a lovely texture. Gravadlax is really easy to make, and so festive, particularly with a beetroot cure which makes for quite a trippy result, visually. Psychedelic salmon. There’s also gin, which is always welcome in this house.

1 side of salmon, approx 1kg in weight, de-boned, skin on

If your salmon has not been previously frozen, then you’re going to need to freeze it. If you’ve bought it from a fishmonger for example, then it will need freezing. If you’ve bought it in a supermarket, chances are it has already been frozen. This is important because it kills parasites that may be present in the fish that would normally be killed by cooking. So freeze it, then defrost and proceed with the curing.

Peel and roughly grate the beetroot, bash the juniper berries and then whack both in a blender with the salt, sugar and gin.

Run your finger over the surface of the salmon to check for any bones. If there are any, remove them with tweezers or pliers.

Cut the salmon in half widthways (mine was cut lengthways due to a kitchen communication fail). Smother the flesh sides with the cure. Lay the dill on top. Sandwich the two halves together so the thin end of one is resting on the thick end of the other. Wrap tightly in cling film. Place in a dish and weigh down with, say, another heavy dish.

Leave the salmon for 3-4 days in the cure, turning every day. After this time, unwrap, rinse briefly, pat dry.

To serve, cut down and slightly on the diagonal so as to cut slices but not the skin. Great with soda bread, butter, crisp bread, capers, lemon, sharp salads. Will keep on the fridge for a week or so, well wrapped. The Cheese Toastie that Took a Week to Make