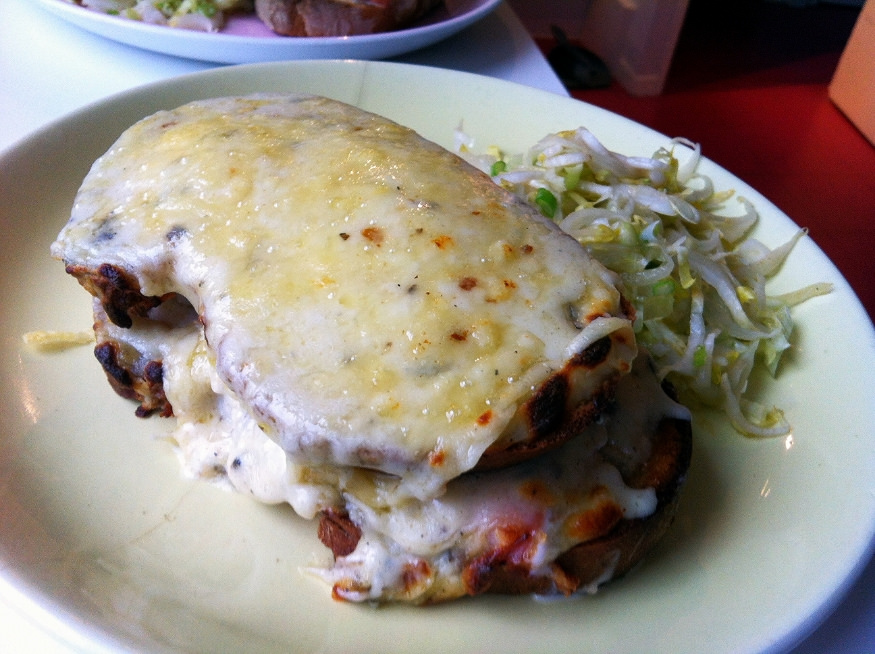 Finding the perfect croque monsieur became a bit of an obsession for me and @donalde for a while, to the point where we had a shared spreadsheet filled with croque locations and notes. We never found a really good one, even in France. The worst I’ve ever eaten though was at The Delaunay; it finished me off and the mission went swiftly on the back burner.

Then one day I find myself snuffling my nose around a bag of Italian truffles and getting very excited at the suggestion we might make a TRUFFLED SUPER CROQUE.

They’re a bit different, these truffs. Known as Bagnoli, or tar truffle, they’re a lot cheaper than the more famous ones (buy them here), and they also need a bit of cooking. Raw, they have a kind of petroleum scent that seems like it should really be getting you high; like if you ate a whole one you’d be tripping your tits off for DAYS. When cooked however, this mellows and they taste a lot more, well, truffly.

So the stages of croque construction worked like this: a slice of really fantastic sourdough, from Wild Caper in Brixton Market (some of the best carbs in London), which has the ability to absorb the sauce while still maintaining some self respect; a softer white loaf wouldn’t be able to handle such an oozy monster. Then, a butter flavoured with rosemary, garlic and Halen Mon smoked salt (HUBBA), followed by ham, a mixture of grated Gruyère and truffle, the other slice of bread, then an obscene wobbly blanket of thick bechamel, again infused with truffle, plus onion, bay and peppercorns. Oh yeah and then a bit more cheese on top. In for a penny and all that…

Afterwards I had to lie beached on the living room floor moaning ‘this is so uncomfortable’ whilst simultaneously being unable to get up and thinking constantly about the bite left in the kitchen that I’d not been able to manage. How could I let that happen? Could I not have dug deeper? Well, no, because I’d hate to sully the memory of such a perfect croque, particularly one that was such a long time coming.

We served it with a salad of endive and spring onion, sharply dressed, which is essential. Do not attempt to consume this sandwich without aforementioned counterpoint. 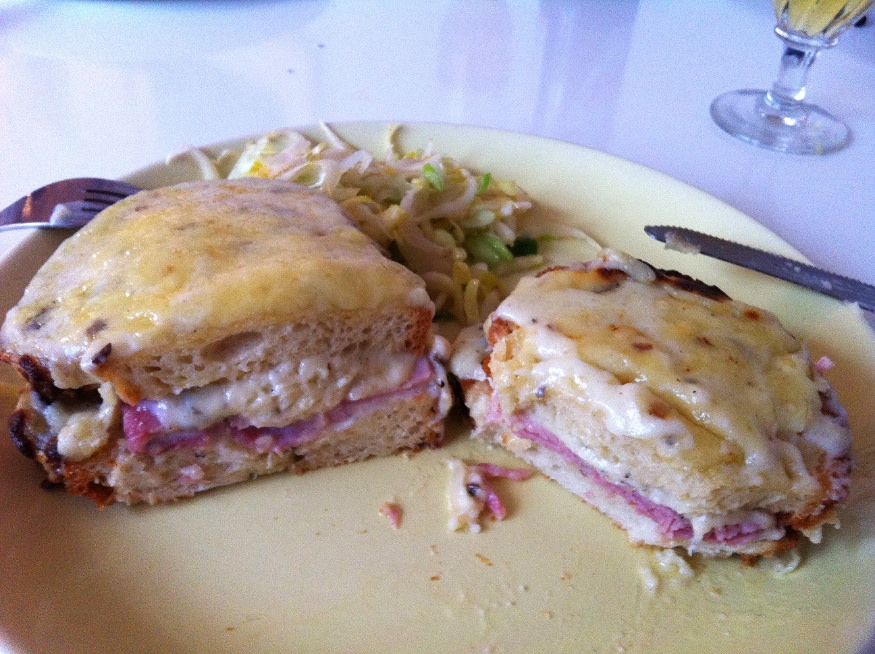 Heat the milk gently with the truffle, peppercorns, bay leaves and onion. When it reaches simmering point, take it off the heat and strain into a bowl.

Melt butter and then mix in the flour, stirring vigorously to make a smooth paste. Start by adding the milk slowly, mixing all the time. When about half of it is in, start adding it in larger quantities. The sauce should be smooth and glossy. Let it cook out gently for about 5 minutes, then remove from the heat and season.

To make the sandwiches

Start by toasting the bread lightly. Spread with the flavoured butter, then add a layer of ham, then mix a load of grated cheese with grated truffle and spread that on, thickly. Then add the other slice of bread and top with loads of the bechamel sauce. Add a little cheese on top if you want to be really rock and roll. Place under a low grill until the whole thing starts to melt. It’s good to do this slowly as you want to make sure that the inside is melted. When it’s going nicely, turn up the grill a bit to get the top all nice and bubbly.

Eat with a sharply dressed salad, then have a lie down.