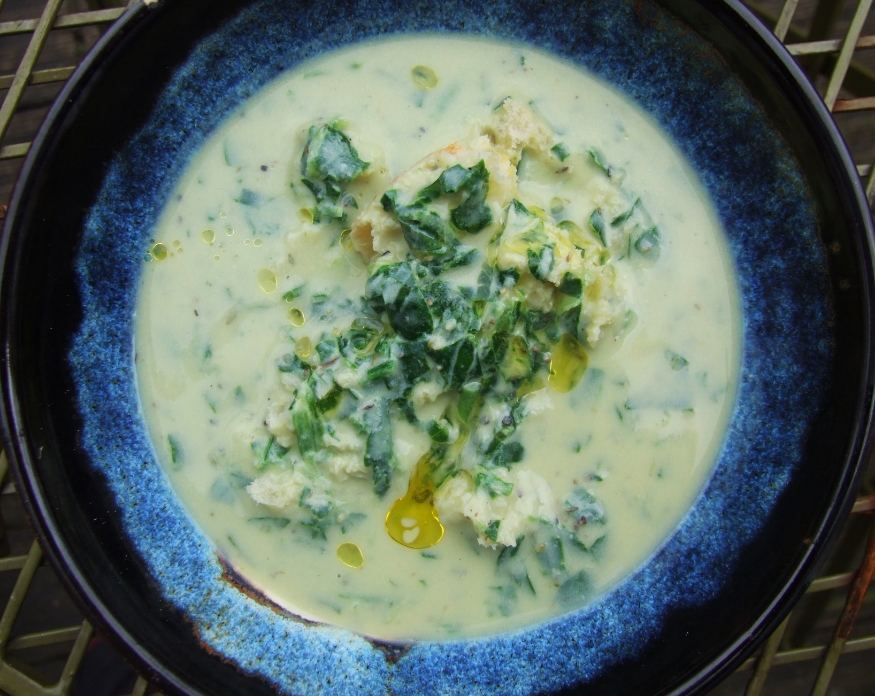 I actually can’t stop eating outrageous amounts of garlic. One or two cloves is no longer an acceptable amount. The obsession gently rumbles on. In contrast, I like to think that my immune system is racing ahead, building lymphocytes faster than you can say ‘flu’. In reality, rather than glowing with shiny health I’m sure I just gently whiff of garlic. Constantly.

Gorgeous little soup though, even if it is rather rich. I based it on this one but reduced the amount of regular cloves, omitted the sage and added a small handful of the wild garlic I picked at Riverford Farm. The soup is interesting because it goes from looking like hot dishwater with a few pearly cloves bobbing on the bubbles to a creamy, velveteen elixir; pretty amazing considering it doesn’t contain even the merest smidgen of cream. It is instead enriched with the rather wanky sounding ‘binding pomade’ – a combination of eggs, Parmesan and olive oil. You slowly whisk the oil into the cheese and amber yolks, then a ladleful of the broth into the ‘pomade’ and then the whole lot back into the broth. It’s really rather a calming and leisurely process. I used the time to reflect on important issues such as where I might have left the key for the bin room, whether it was too early to open a beer or not and when I might find time to make Ottolenghi’s caramelised garlic tart. Actually that last one really is important.

The original recipe suggests pouring the finished soup over day-old pieces of baguette, which I did, but found the combination of rich soup and soggy bread paste rather unpleasant. Really unpleasant, actually. Like eating a piece of sodden bog roll. The second helping was much more enjoyable with a bit of traditional dunking and of course, the terminal wiping of bowl.

It is extremely garlicky but deeply savoury; the wild garlic brings its sprightly green bite. I would advise you to use good Parmesan, as it makes all the difference and a nice grassy olive oil that isn’t too strong. The finished thing is really rather pretty and spring-like I think, with a cheeky richness that makes a stealthy approach, soothing and satisfying with every mouthful.

(adapted from this recipe)

Bring the water to a boil in a pan and add the thyme, bay leaf, garlic cloves and salt. Bring to the boil then turn down and simmer for 40 minutes. Strain into a bowl, then remove and discard the bay leaf and return the garlic and the infused water back to the pan but off the heat. Taste and add more salt if you like but remember the Parmesan is coming later.

Whisk the egg, the yolks, Parmesan and pepper together until creamy. Slowly drizzle in the olive oil, whisking constantly, as if you were making mayonnaise. Then, take a ladleful of the broth and do the same, whisking it really slowly into the oil mixture. Now tip the whole thing into the remaining broth in the pan and set over a low to medium heat, stirring all the time until it starts to thicken. Heidi mentions in her recipe that the creator of the original recipe, Richard Olney, says that it should be cooked, “just long enough to be no longer watery” but I agree with her that it is nicer when it’s a bit thicker.

Serve over bread or not – up to you. I prefer it not. I drizzled a bit more oil and grated a little extra cheese on top.

Minestrone with Garlic and Parsley Toast