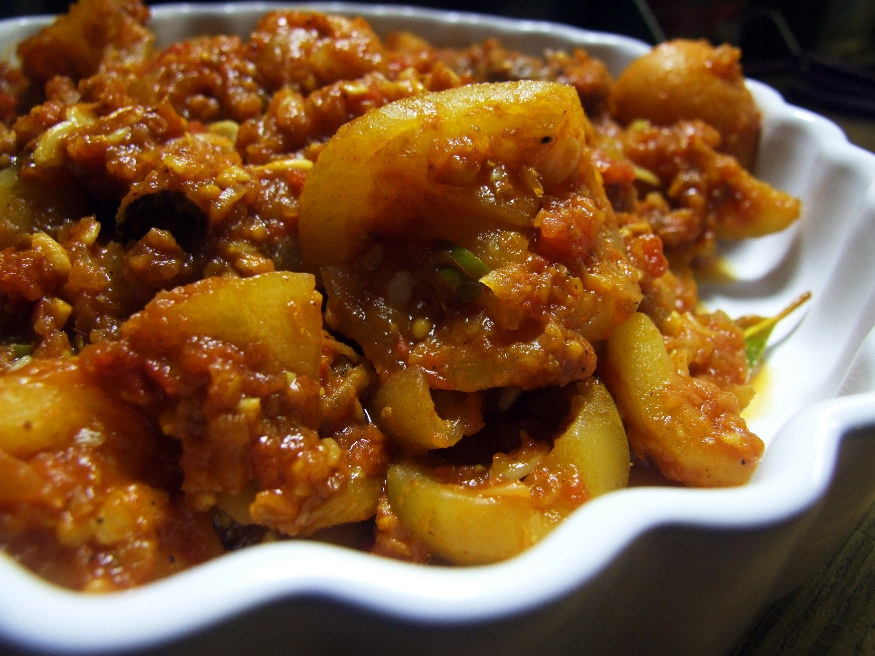 The tinda masala is one of my favourite dishes at Tayyabs; certainly my favourite vegetarian dish and a no-brainer when it comes to ordering. The very first time I went there, I noticed it clinging on at the bottom of the menu and decided to try it as a sympathy order. When I put the first mouthful in my greedy gob however, there was no doubt that the dish was laughing in the face of my pity. I’ve only ever been served one disappointing tinda which, sadly, arrived after I’d been talking my mate’s ear off about it in the pub beforehand. It was watery, bland, lukewarm and all the worse for me bigging it up so much. Generally though those juicy little gourds are cooked on a fierce heat with a punchy, slightly sour sauce, the main ingredients of which Tayyabs insist are just garlic, ginger and chilli; I can’t blame them for not wanting to reveal their secrets.

I’ve seen fresh tinda around recently, but they always seem to look very tired. I cannot tell you the frustration this caused me until eventually, the canned ones stepped in to offer succour.  As soon as I opened that tin, I got a familiar waft of briny tinda – Tayyabs must use the canned version too.

I used this recipe from Mamta’s kitchen, although I omitted the potato and used mustard seeds where she suggests a choice between mustard and cumin. Overall I was pleased with the result: a perfect starting point for some experimentation, although I did think the tomato dominated and will reduce that considerably or just add some fresh at the end like Tayyabs do. A crispy onion garnish would also be most welcome. The tinda don’t really have much flavour of their own but are special for being so incredibly thirsty, soaking up the spiced juices which then burst into the mouth at the slightest pressure. Next time, I will tweak the spices and cook it faster at a higher heat, to avoid breaking up the tinda so much. Of course, I’ll need to make a trip to Tayyabs first for research purposes, just to make sure I get that spicing right. What a hardship.