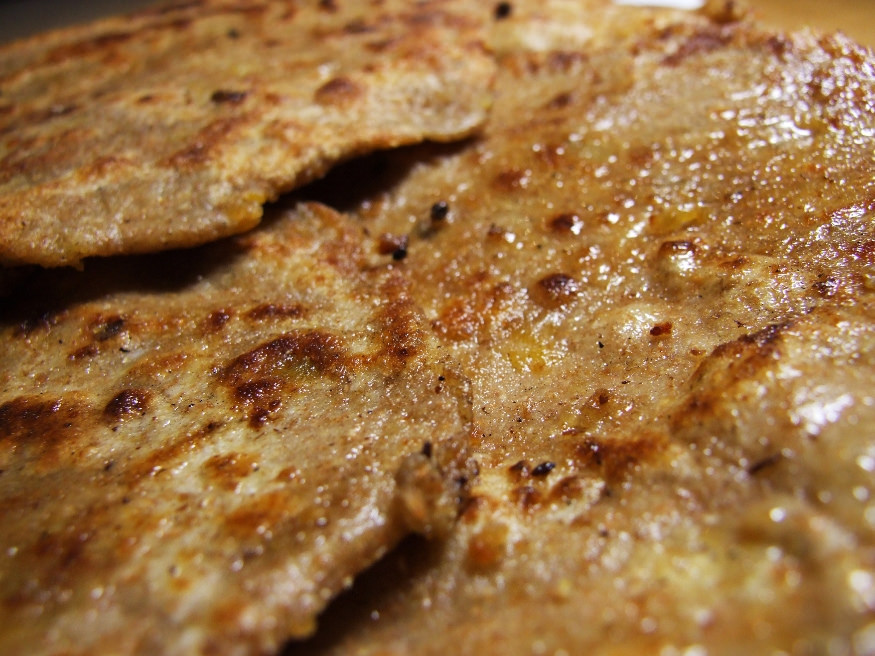 I finally got around to making Gastrogeek’s aubergine dhal after months of bleating on about it. The addition of smoky burnt aubergine flesh is simply inspired and the dish lived up to expectations even after the long build up. With a lot left over though, I wanted to try experimenting with stuffed parathas, which would also solve the problem of not having any bread left to scoop everything up with.

Most recipes instructed to make a dough first, then roll each piece out, spoon a blob of cold dhal in the centre and then pinch it around and seal as if making a dumpling. The ball is then pressed down and rolled out, thus incorporating the lentils. I suppose you could call that ‘stuffed’ – the dhal was certainly stuffed inside the dough at one point, but the rolling basically just mushed the whole lot together.

This method does not make things easy when it comes to rolling. Despite liberal flouring, it was hard not to end up in a big, sticky mess as the lentils burst forth from the dough with alarming force, taking no taming whatsoever no matter how gently I rolled and flipped and turned. There had to be an easier way.

It made sense to me to try mixing equal amounts of flour and dhal at the very beginning, so the curry becomes the water that holds the dough together. Since they are not really ‘stuffed’ anyway then what would it matter? I made another batch and it worked well; I added just a drop of water to bring it together completely and the result was a much more workable dough that rolled out to a neater, thinner paratha. I didn’t fold the dough over though, so they weren’t as flaky as a regular paratha. Next time, next time.

I cooked them in a cast iron skillet in a little oil, brushing each with an indecent amount of ghee. We scooped up mouthfuls of leftover rogan josh, pumpkin and coconut curry and one of my favourite chutneys: walnut and mint. The recipe comes from Madhur Jaffrey’s ‘Curry Bible’ and is well worth a try. You just stick walnuts, mint, garlic, chillies and lemon juice in the blender, then mix with seasoned plain yoghurt. The result is rather hot with a tangy kick from the yoghurt and it has that immensely satisfying texture of blended walnuts, just like that of muhammara.

I’m not exactly the world’s most skilful paratha maker, but I did manage to produce some buttery, toasty, curry scooper-uppers, which had a pleasing sour and smoky kick and a bit of texture variation from the lentils. A welcome addition to the leftovers repertoire and one well worth the extra couple of pounds in weight gained due to my inability to control myself around clarified butter.

This isn’t the most authentic recipe you’re going to come across but it is easy, so do what you will.

Equal amounts of dhal (cold) and chapatti flour. If you can’t find chapatti flour then use a 50/50 mix of wholemeal and white flour.
A pinch of salt
Ghee, for brushing
Oil, for frying (I used groundnut)

Mix the dahl and flour together with your hands and then add a drop of water if needed to bring it together. Knead it on a lightly floured surface until the dough becomes smooth (apart from the lentils, obviously). Then cover and leave to rest for about 10 minutes.

Divide into balls roughly the size of a small lemon and roll out to 10-15cm wide circles. You basically want to get them nice and thin. You can then try folding the parathas like I forgot to do, in half and half again before re-rolling. This should give you some nice flaky layers. I imagine this might be harder with the stuffed ones however, as the lentils make the dough a bit lumpier.

Heat a heavy pan until very hot (I used a cast iron skillet), then fry each in a little oil (about 1tsp) on both sides until brown blistered patches appear. Brush liberally with ghee once cooked and set aside on a warm plate while you finish the batch.

Madhur Jaffrey’s Walnut and Mint Chutney (from The Curry Bible)

Whizz the walnuts, garlic, mint, chillies, lemon juice, salt and 5 tablespoons water in a blender until you have a smooth paste. Using a fork, whip the yoghurt in a separate bowl until light and fluffy. Mix the paste from the blender into this. Taste and adjust the balance of seasonings as necessary.