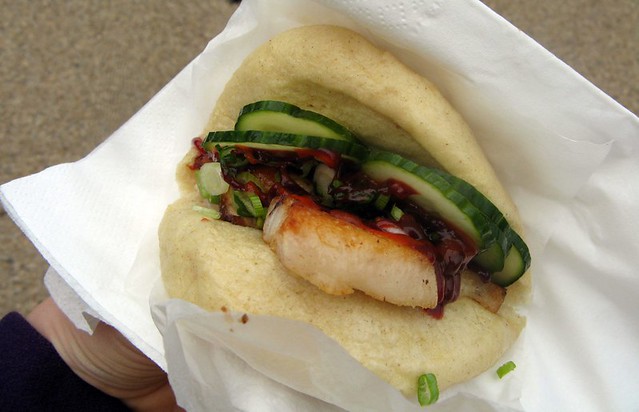 I have an intense, borderline unhealthy affection for bao buns peddled by the likes of Yum Bun and Bao London; there’s just something about that pudgy steamed bread that is so addictive. Yes, I adore a sourdough with a crackly crust and a chew that could shave the jowls of a bloodhound but there’s a lot to be said for the super soft and doughy. In Northern China they have nailed this texture in the form of the mantou. I can’t get enough of them, so last weekend I went to a cookery class at School of Wok in Covent Garden to learn some tricks which would hopefully enhance my buns.

The Chinese use much whiter (bleached) flour, which is banned in the UK. A lot of places in Chinatown still use it however as there’s a legal loophole somewhere along the importing chain. You’ll see that the buns I’ve made have a yellow tinge to them, yet those that you see in restaurants are snowy white; the latter are mostly made in Chinatown with the imported flour, and then supplied to the restaurants. Apparently it’s also possible to buy the flour for home use, but recently there’s been some kind of shortage. If the yellow colour really bothers you, then add a tiny splash of rice vinegar to the water when you steam your buns, and that will whiten them slightly.

The dough needs kneading until very smooth; the idea is to work the gluten so that it becomes nice and stretchy. When it’s done you should be able to push your fingers gently into the surface of the dough without it cracking straight away. Once risen it’s rolled out into an oval shape, then oiled and folded over a chopstick; the oiling is important to stop the dough sticking together during steaming. 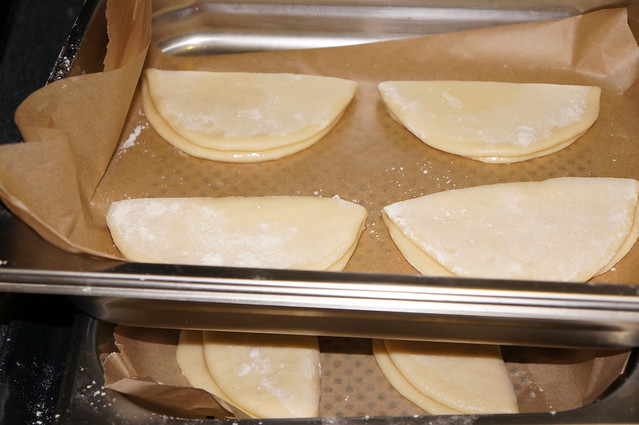 We try steaming them two ways for comparative purposes, firstly in a bamboo steamer over a wok full of water, and secondly in a snazzy steam oven which I am fascinated by. The steam oven has more of an all-engulfing heat, obviously, which surrounds the buns and cooks them evenly – best for the sandwich bread. The bamboo steamers are over direct heat, which makes the dough more likely to crack as it cooks – this is desirable when cooking buns like char siu bao, when you want that classic split-open top. 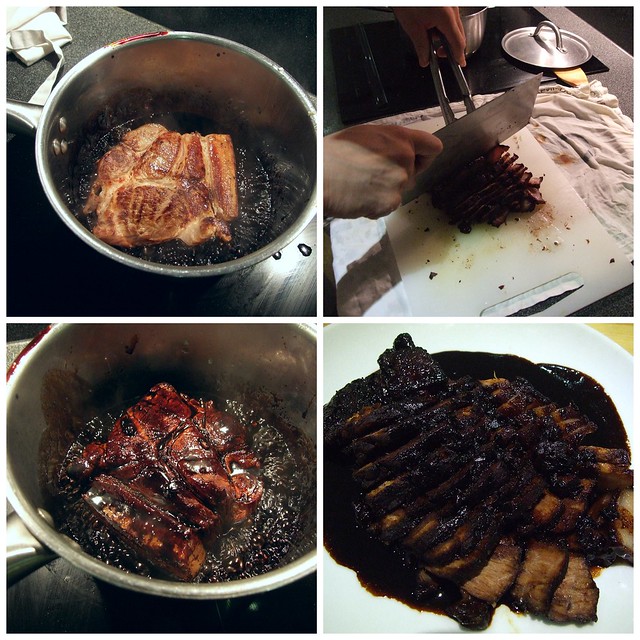 After 8 minutes we had perfectly steamed, if not quite perfectly shaped buns, ready to be rammed with pork braised in a fermented tofu sauce, a quick cucumber pickle (recipes below), lettuce and Japanese mayo. I ate three and felt the oof; despite their fluffy appearance they are incredibly filling and considering that we also made char siu and custard buns… if someone had pushed me out of the door I could’ve rolled to the bus stop.

The steamed bun class is the most technical of all the classes at School of Wok, and I learned a huge amount, including some dim sum techniques which Jeremy, our teacher, said experts generally refuse to demonstrate until people have had much more experience. He’s all about making this kind of cooking more accessible, is our Jez. The class is very relaxed, friendly and fun, and there were only three of us there, so everyone got lots of attention (I believe the maximum class size is 8). I was on the course with two young guys who wanted to start a street food stall selling bao, having made them only once before. Considering their limited knowledge of cooking, and the fact they were both knackered by lunchtime, I’m not sure how well that venture is going to work out. One of them did say however that the class was the first time he’d EVER enjoyed cooking, which is a damn good advert for Jeremy’s classes, if perhaps not the foundation for a successful street food business…

Activate the yeast and then add to rest of the ingredients and knead well.

Allow to rest in a warm place covered with a damp cloth for 2 hours, or until the dough has doubled in size.

Just before shaping, add 1tsp baking powder to the dough and knead well.

Roll the dough into a cylinder, then cut pieces off this, and roll out into oval shapes. Lightly oil the top of the dough, then put a chopstick at the half way mark, fold over and remove. Allow to rest in a warm place, under a damp cloth, for 30 minutes or until 1.5 times the size.

Line a bamboo steamer with greaseproof paper and steam for 8 minutes. Do not lift the lid in the first 4 minutes.

Finely chop the garlic and place in a small prep bowl. Using the base of a teaspoon, crush the fermented bean curd into the sauce until a
thick paste is formed. Mix the soy sauce, black vinegar, sugar and sesame oil together.

Heat 1 tbsp vegetable oil in a saucepan to high heat. Add the garlic to the pot and stir.

Turn the heat down to a medium heat and then add the fermented bean curd paste.

Sear the pork belly piece on all sides in a separate pan, ensuring the skin is well
sealed and golden brown. Once seared, place the pork into the saucepan and stir until the whole piece is
covered in sauce.

Add the soy sauce/black vinegar & sugar mixture to the pork and bubble through for
2-3 minutes. Now turn heat down to low.

Turn the pork over so that the skin is touching the bottom of the saucepan. Pour enough hot water over the pork to just about cover. Stir well and then cover with lid. Simmer on low heat for 1 ½ hours – 2 hours until the pork is soft and succulent and full of colour. Turn occasionally to allow sauce to absorb into the whole piece.

Combine everything and let sit for half an hour or so.