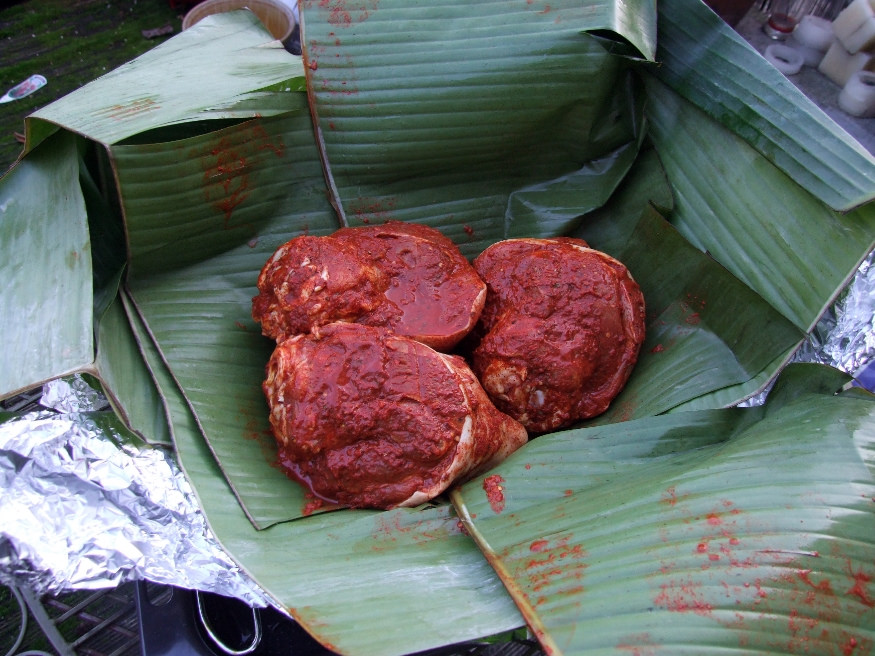 A couple of weeks ago I did a stall at Ms. Marmite Lover’s Underground Farmer’s Market and found myself pitched up next to the Capsicana Chilli Company. Like a kid in a sweet shop I stocked up on loads of Mexican chillies and as I was packing up I heard a ‘psst’ from behind me; I swung around to find the chilli guy, Ben, offering me a pouch of achiote powder like it was illegal drugs, “hard to find in the UK” he whispered, “have a little play around with that.”

Achiote (annatto) is the seed of the achiote tree and is an essential ingredient in Mexican cuisine; I had a little ‘aha!’ moment when I first mixed it up into a paste – it smelled instantly familiar even though I’d never cooked with it before. It has a curious smell, almost like a cross between chilli and citrus. This was the flavour I was always trying to identify when I ate ‘proper’ Mexican food like Buen Provecho’s tacos.

I turned to Diana Kennedy’s classic tome, ‘The Essential Cuisines of Mexico’ for this pibil recipe, which calls for a pork shoulder to be smothered in the prepared achiote paste, wrapped in banana leaves, cooked for a torturous eternity and then doused in an incredibly fiery sauce. My butcher had no pork shoulder so I bought pork knuckles instead, allowing a bit of extra weight for the additional bones.

To make achiote paste I mixed the achiote powder, oregano, cumin, allspice and water to a thick red sludge which I smeared all over the pork as directed, having sliced it here and there to let the flavour get deep inside and given it an initial bath in salt and orange juice. There’s some garlic and ground piquin chillies in there too. The knuckles were wrapped in banana leaves, which Diana insists imparts a particular flavour; I have to say I didn’t notice it, but then I didn’t know what I was looking for and wrapping things in banana leaves is still fun. You can obviously use foil instead. 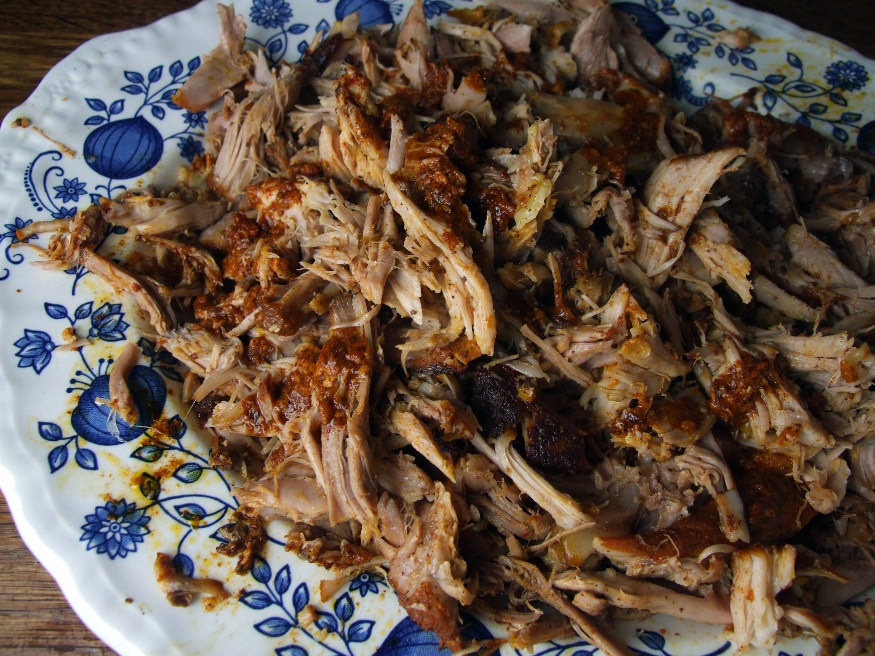 They were in the oven for 6 hours by which time I was going clinically insane with anticipation. I unwrapped the parcel and found the meat just slipping off the bone; there’s a lot more meat on a pork knuckle than I realised. The meat shredded easily and the achiote powder gave it an earthy flavour that is impossible to substitute. A word of warning to potential pibil cooks though: make sure that package is tightly sealed. I lost about half the juices when I turned the pork midway through cooking which was very traumatic; protect that precious cargo! Still, I had enough to play with and there’s a fantastic separate accompanying sauce, too. It is hot, consisting as it does of orange juice, red onion and THREE WHOLE SCOTCH BONNETS. I wimped out and settled on two which was enough. The acidity of the orange juice does cook the chillies a little though, taming their ferocity somewhat.

We made big, messy tacos, piling the meat on with our hands and topping with creamy guac and a spoon of that orange-chilli sauce. I almost cried when I took the last bite of the last taco and wiped the final bit of sauce from my food flecked face. One to firmly embed in the repertoire.

If you liked this you may also like the look of my pork cheek tacos with blood orange and chipotle or chipotles en adobo.

Banana leaves, for wrapping (you’ll need foil as well and you can leave out the leaves if you can’t get hold of them; they’re cheap in Peckham but can be expensive in shops elsewhere. If you do use leaves you’ll probably need to clean them with a damp cloth and make them more flexible by heating slightly over a flame)

For the achiote paste

Make deep cuts in the pork knuckles with a long knife then rub it all over with the salt followed by the orange and lime juice.

Make the achiote paste by combining crushing the allspice berries to a powder and mixing with all the other ingredients. Crush the garlic with the piquin (or other dried chillies), 1 teaspoon salt and 3 tablespoons orange juice, then mix with the achiote paste. Smother this all over the knuckles, rubbing well in. Make a parcel by first layering tin foil, then banana leaves and placing the knuckles in the centre; fold the package to seal it and wrap with foil. Refrigerate overnight.

The next day, remove the pork from the fridge about an hour before you want to cook it and preheat the oven to 165C. Get a big roasting tin and put a rack inside it (I just put a cooling rack in a tin) then put 125ml water in the bottom. Place the pork package on top of the rack and cover it tightly with foil. Cook for 4 hours then turn the knuckles over and baste them. Cook for a further 3 hours or until the meat falls easily from the bone.

Carefully remove the knuckles from the parcel, taking care to save those precious juices. Tip the juices into a bowl and set aside. Shred the meat from the knuckles and set aside in a bowl then pour the juices over and give it a good mix. This is now ready to serve with the sauce and guacamole.

Mix all the ingredients together and set aside for 2 hours.

I always cheat and buy ready made corn tortillas then cut circles from them and warm them through in a dry pan.