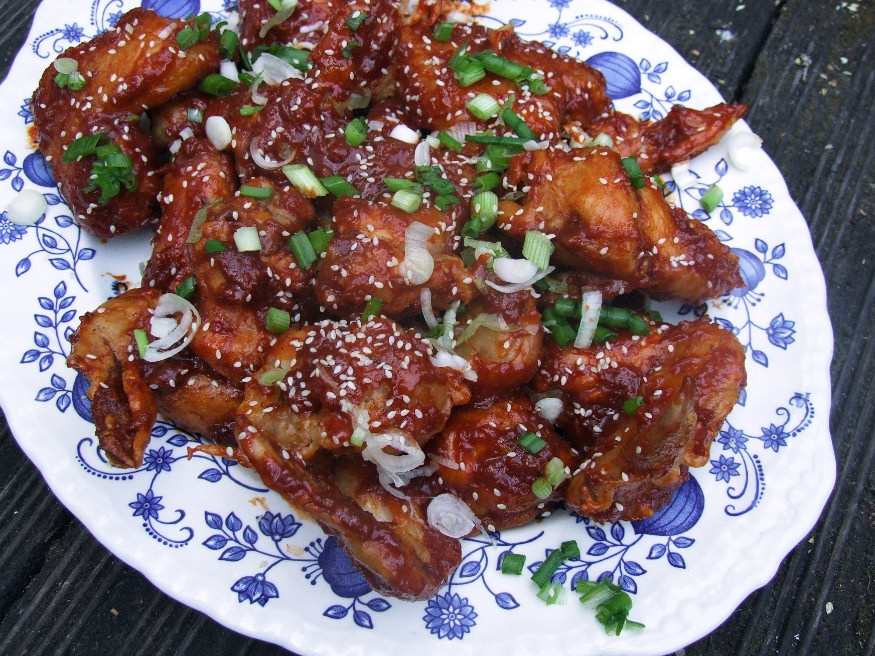 This is the post that won me the Young British Foodies writing award in 2013.

This is a recipe that was concocted by me and my friend when we were drunk; I’m not going to lie. It started thus:

“But let’s make it like, you know, better and shit! We’ll stamp the style of Peckham all over those birds and then deep fry them! TWICE!”

Because deep frying when drunk is always a particularly good idea…

So, we went out immediately and bought some chicken wings, which now reveals that we were in fact drunk in the middle of the day. We had no recipe to hand, so we started poking about on the internet, as you do. After a while, the maelstrom of different methods, ingredients and opinions made our heads spin and we began to approach things according to the rules of drunken logic; that is to say, we decided to wing it by borrowing random ideas and ingredients willy nilly to create one unholy mother of a mash up.

I expect I’ve totally sold this recipe to you by now so, without further ado, here’s how to make your very own drunken batch of pure PKFC™:

Begin by putting some Wu Tang on. Turn it up loud.

Now you can marinate your chicken wings. Start by vigorously pounding two cloves of garlic in a pestle and mortar. Stick this in a bowl and add one generous tablespoon gojujang, which is Korean chilli paste. Immediately rename said chilli paste ‘Kajagoogoo’ upon discovery that you cannot remember how to pronounce gochujang properly because it is an unfamiliar word and you are hosed. Complete the marinade by adding enough milk to comfortably submerge the chicken in a spicy bath. Plunge your hands into the bowl and start rubbing and fondling the wings, while saying things like ‘horny’ ‘hubba’ and ‘massage my meat’. Film your friend doing this on your iphone. Both regularly fold in on yourselves in fits of giggles. Set the wings aside. To make the batter for the wings, put some K-pop on. Turn it up loud. Next, harrumph a load of flour into a bowl (150g plain, 200g cornflour + 1.5 teaspoons baking powder, pinch of salt), and set about making it sexy. You’re aiming to create a flavour bomb and drop it on batter city, yo. Boom! Start by toasting 1 level tablespoon of sesame seeds, then pounding, pounding, pounding them (vigorously) in a pestle and mortar along with 2 dried red chillies, 1 star anise, 1 teaspoon ground ginger and a er, touch of Old Bay Seasoning because you’re drunk and you’re thinking it’s a great idea at the time. Next, rain down a little chemical magic on that party by adding 1/4 teaspoon of MSG, just for shits and giggs. Mix the batter with half the can of Red Stripe you’re holding at the time plus an equal quantity of water; aim for a thick slurry that gloops off the tip of each chicken wing in explicit, quivering ribbons. This should be outrageously funny so if it isn’t, that means the texture is wrong. Add more flour or beer until you reach the uncontrollable, shoulder shaking like Mutley stage of laughter.

1§To make the sauce, put Milkshake by Kelis on. Turn it up loud. Crush 2 cloves of garlic and cook it in a pan with 1 grated onion, some finely chopped ginger, 1 tablespoon pounded (vigorously) rock sugar and 4 tablespoons Kajagoogoo. Set aside.

Heat your oil for deep frying. This should be done with the utmost care and attention, ideally while not drunk and not holding a can of beer. One should definitely not walk away from the pan. In fact, just don’t ever do this unless you’re a complete and utter tool.

I’ll continue. Use a chopped up piece of crumpet to test if the oil is hot enough because you don’t have any bread. When hot, slip each wing into the batter and pull it out slowly so that it looks kind of rude; give props to the comedy noises and visuals. Lower into the hot oil, 2 wings at a time and let them fry for about 4 minutes (total stab in the dark on the timings). Drain on kitchen paper. When all are done, fry them all a second time until golden all over. Drain again.

Slap the wings about in the Kajagoogoo sauce a bit until they’re more or less covered. Pile onto a plate and garnish with chopped spring onion and sesame seeds. Serve with a roll of kitchen paper, a massively smug expression and an outfit that EXACTLY matches the colour of the Kajagoogoo. You’ll see. Revel in the funky fermented chilli heat and sticky sweetness, the filthy satisfaction at having double deep fried some meat (vigorously). PKFC™ sounds like a chemical abbreviation and it may as well be considering all the stuff that went into this recipe. I haven’t mentioned thus far the teaspoon of raspberry jam we added ‘for a laugh’ – now that’s living. You know what though? These could actually be great, pending a few improvements…

1. Swap half water/half beer mix for all beer mix to make the batter lighter. It was kinda thick and spongy. Also, increase the quantity of liquid (same reason).
2. Use less Kajagoogoo in the sauce; that shit is intense and the overall effect was cloying.
3. The raspberry jam probably isn’t necessary…
4. Buy an oil thermometer to reduce anxiety.
5. Be more responsible.
6. Make more fried chicken in general.
7. Do more exercise.
8. Make more of an effort with the recycling.
9. Stop swearing so much.
10. Get your roots done.

If you have any leftover chicken it is possible to make the hangover breakfast of joy (see below), which consists of clumsily hand fumbled leftover wing meat and the odd piece of batter fried with onion and topped with an egg. Jubilee paper plate (impulse purchase) optional…