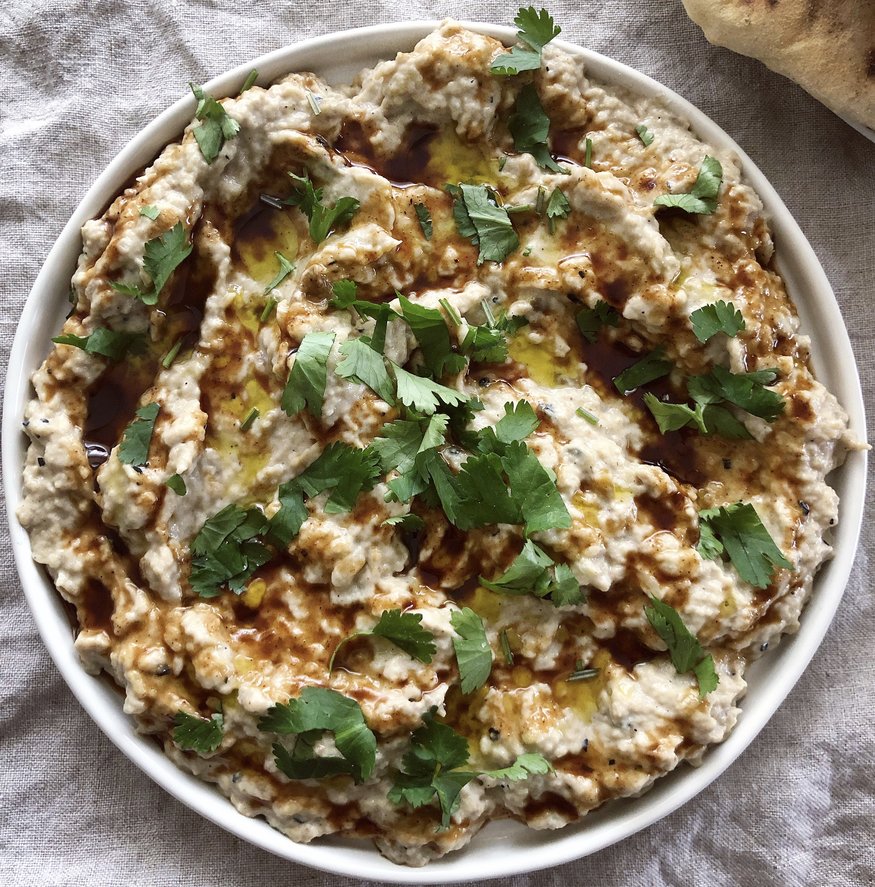 I ate a stunning baba ganoush at Maramia Cafe recently as part of a ‘lamb banquet’. The meat was soft and tasty as hell, but the baba was what really blew people’s minds. It was thicker than mine; I wondered how they’d achieved the consistency and considered straining the yoghurt. I’m a serial strainer – you end up with something almost cream cheese-y but way more refreshing. I tried using it in the baba and the result was of course, richer. I’ve also started using smaller aubergines, which means that the smoke can penetrate all the flesh, rather than just the outer layer.

That’s it really – makes all the difference.

First, strain the yoghurt. If you don’t remember to do this the night before it doesn’t matter, even a couple of hours will make a big difference and the process itself takes seconds of preparation. Take a 500g tub of decent Greek-style yoghurt such as Total. Full-fat will obviously taste better than low fat but the latter does work okay. You’ll need some butter muslin, which is available from hardware stores easily. Cut a square of the muslin and line a bowl with it. Mix the yoghurt with a scant teaspoon of salt, mix well, then dollop it all into the middle of the muslin in the bowl. Gather it up, tie string around the top then tie the other end to something (I use a kitchen cupboard handle). Leave it for a few hours or ideally, overnight with the bowl underneath. Pierce the aubergines with a fork and place directly on the gas rings of a hob (1 per ring) on a low flame, or put them under the grill, turning occasionally until blackened all over and collapsed. They will burst but this is fine, it just requires a bit of attention so you don’t lose the flesh. Remove to a plate and let cool slightly, then scrape the flesh from inside, leaving any bits of blackened skin and liquid on the plate behind.

Blend with all the other ingredients and season and adjust as necessary. You may want to add more lemon, yoghurt or salt for example. Drizzle with pomegranate molasses and scatter over extra coriander, if you like.

Allow to sit for a few hours before serving with hot flat breads or pitta for scooping.