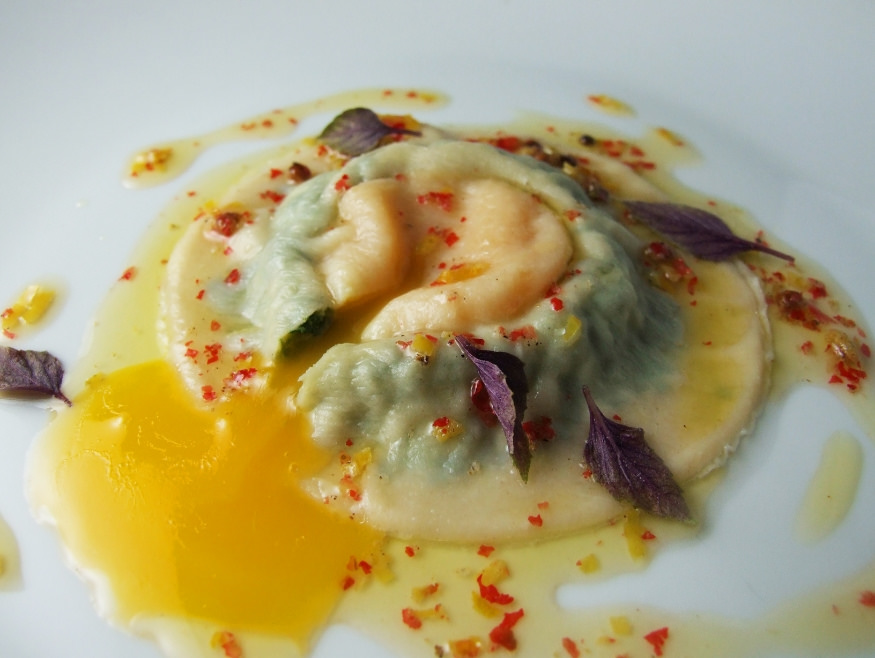 Yeah, quite chuffed with these. I thought it sounded near impossible to slip an egg yolk into the centre of a ravioli and cook it without it either busting out into the water or completely over-cooking and to be honest the latter worried me more; the idea of hard-boiled yolk encased in pasta is just really, really grim.

Anyway they are actually quite easy. You have to make your own pasta of course, so it depends how you feel about that and you really will need a machine because the pasta needs to be as thin as you can possibly get it. That would be a long hard slog with a rolling pin and I ain’t no Nonna. It’s easy when you make pasta at home to be fooled into thinking you have it thin enough when you don’t, which is exactly what happened to me the first time I made these. They cooked perfectly, but the pasta was just too fat and gluey.

The next time I pushed right through to the heady heights of setting number 9 on the machine and was rewarded with papery pasta sheets. I made a spinach and ricotta mixture which doubled up as a stand to keep the yolk in place (an idea I tea-leafed from Nicky who used a ricotta and herb mix and took some incredibly good pictures). It’s important to have a large pan so you don’t overcrowd it with ravioli and to have the water at an enthusiastic simmer rather than a boil (to avoid eggy bursts). A mere 2-3 minutes will cook the pasta through (remember it’s very thin, and fresh) and the yolk will remain gooey and ooze out onto the plate creating a rich sauce.

I bathed them simply with melted butter, crushed pink peppercorns, lemon zest and some of the purple basil that my mum grew and I have somehow managed to keep alive. I love how they look all pretty and delicate but are actually packing the punches with pasta, egg and butter. They’re deceptively light in the eating too, dangerously so in fact. You’ll only want one or two per person but there’s no need to worry about not being full; it would be a crime not to mop up all those golden buttery juices with a slice or two of good bread.

Sift the flour into a large bowl. Make a well in the centre and crack the eggs into it. Add the salt. Bring the pasta mix together until you have a rough dough. Knead it on a lightly floured surface until smooth and silky. Wrap in clingfilm and leave to rest for half an hour.

Meanwhile, wash the spinach and without drying it put it straight into a small saucepan on a low heat and put a lid on. Steam until wilted down. Drain, then when it is cool enough to handle, squeeze as much water from it as possible and chop finely. Add to a bowl with the ricotta and Parmesan. Add some black pepper. Taste and add some salt if you like.

Roll out the pasta to the thinnest setting using a pasta machine. Cut into 16 large squares on a well floured surface (you want to leave enough room to cut around the ravioli easily without the stuffing coming out of the sides). In the middle of every other square, put a blob of ricotta mixture, then make a dimple in the centre large enough to hold an egg yolk. Make sure the sides are high enough so that the yolk won’t spill over. Crack an egg over a bowl into your hands so that you are left holding the yolk and the white drains into the bowl through your fingers. Carefully slip each yolk into the middle of the ricotta mixture.

Bring a large pan of salted water to the boil and then reduce it to a simmer. Brush some of the leftover egg whites around the edges of each ravioli and place another pasta square on top. Seal the ravioli carefully easing out any air bubbles towards the edges. Use a glass or teacup to cut each ravioli into a circular shape.

Use a fish slice to pick up each ravioli and place gently into the water. Cook for 2 minutes until the pasta is just cooked and the yolk still runny. Serve with melted butter mixed with crushed pink peppercorns and chopped lemon zest. Garnish with basil.