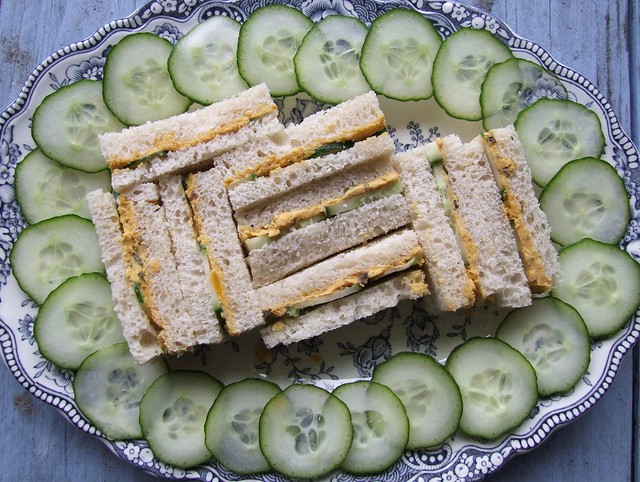 It’s hard to resist making a recipe that looks really weird on paper. This is from ‘The Road to Vindaloo, Curry Cooks and Curry Books‘ by David Burnett and Helen Saberi, which is a charming little book crammed with recipes collected from various sources, spanning several centuries. There are two sandwich recipes in it, both equally as baffling. I hope you will understand that I simply had to know what the combination of hard-boiled egg yolk, butter, curry powder, anchovy and tarragon vinegar tasted like as a sandwich spread. You don’t? Weird. I’ll tell you anyway. I just need to think about how to say it. Um. Okay so I can see what they were trying to do here, which was make something with a hella shitload of umami. It is definitely not lacking in that respect. I’d even go so far as to say that it was rather nice, once I got over the whole bright orange mush thing. I was going to bust out that almost-cliché about not being able to taste the anchovies and them just being a seasoning but to be honest they’re fairly obvious. The egg and curry powder works as you’d expect and so does the tarragon; just think of fennel seeds in a curry and you’ll get the idea. It’s remarkably balanced, actually. Crikey, I’m talking myself round. The cucumber slices are my addition; the crisp freshness is very welcome. I also decided to cut them into dainty fingers due to the erm, intensity of the paste.

I want you to make these sandwiches, and it annoys me that you probably won’t. No-one has the cahoonas to make a sandwich spread like this any more. It deserves to be served.

(by someone called Theodore Francis Garrett (from The Road to Vindaloo, by David Burnett and Helen Saberi, Prospect Books, 2008)

In a pestle and mortar, mush up the egg yolks only with the butter, curry powder, anchovy and salt if desired. Gradually work in a little tarragon vinegar. Butter some bread (I think this was perhaps overkill considering the butter in the paste but knock yourself out) and spread this delightful concoction over it. Layer with cucumber slices. Sandwich with the other slice of bread, remove the crusts, cut into fingers and serve.