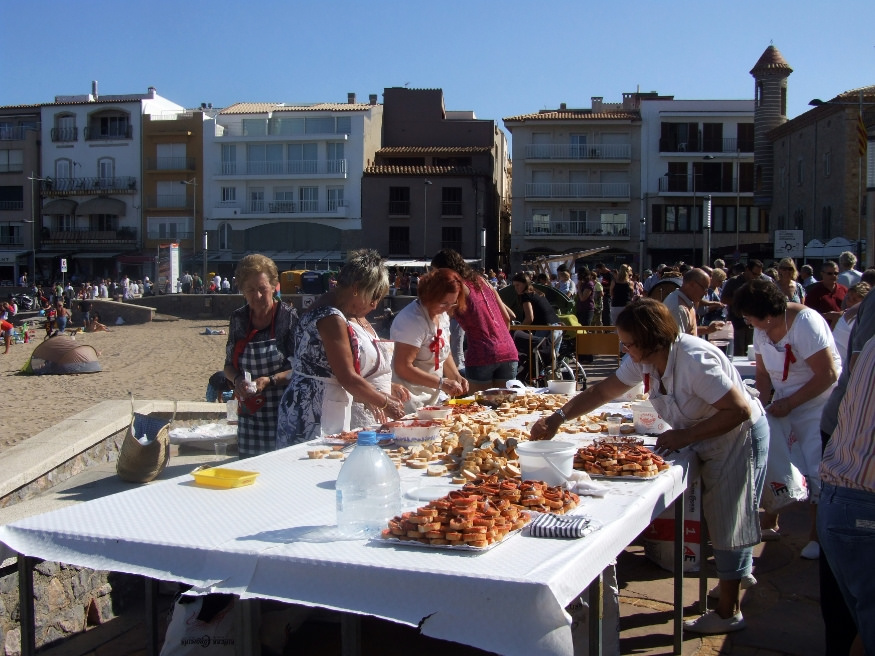 During our 4 day holiday in Spain, the 3 of us managed to spend £80 on anchovies. This is because the L’Escala anchovy is special. The silver-striped fillets have a very firm and meaty texture. They are still salty, but much less so than those sad brown scraps you get from the supermarket; all the rich anchovy flavour but a refined, pedigree version. Apparently the traditional curing method is very important. After the first salting, highly skilled workers gut and behead the tiny fish in a single movement. They are layered in barrels and left alone for 3 months, during which time flesh and salt get together to form a natural brine inside.

The ‘anchovy coast‘ runs between L’Escala and Southern France. The people of L’Escala are very proud of their little fishes, to the point where they have a museum and a  festival to celebrate their existence. What a wonderful idea. Even the mighty Ferran Adrià has attended, to receive the town’s ‘Golden Anchovy Award’ for his work promoting the local delicacy.

We speculated about what an anchovy festival might involve. The eating of anchovies, surely? Some anchovy-themed live entertainment? People dressed up in giant anchovy costumes?

Sadly, not the latter. On the food and entertainment front though – all systems go. The action was taking place on the beach, the sunshine was glorious and while others were making the most of it sunbathing and swimming in the background, we were joining the long queue for a fishy snack. It moved quickly, and as we edged closer the production line came into view. A group of chattering women hunched over big trays, deftly rubbing sliced bread with tomato and topping each with a fillet. 3 of these slices plus a cup of very easy drinking and perfectly passable red for 1 euro – less than a pound. That still amazes me. We wolfed them down then finished the remainder of our wine listening to three chaps playing what seemed like some very traditional Spanish music. They were presumably singing about anchovies. At least in my head.

3 anchovies of course, is never enough. There are dedicated shops all around L’Escala and so it was anchovies with lunch, anchovies with dinner and the odd dash to the kitchen for a sneaky one in between. Once the jar was empty, I found myself dipping pieces of bread into the remaining oil. Towards the end of the holiday, I was as natural as a gull – mouth open, head back, down in one. For a slightly more sophisticated way to eat them, here’s a green bean recipe. It has an anchovy dressing with a murmur of mustard and a mashed up boiled egg for richness. I ate mine with extra anchovies.

To make the dressing, smash the garlic to a pulp in a pestle and mortar, work in the mustard and anchovies then add the lemon juice and olive oil and mix well. Finally, work in the egg, pounding and mixing until you have a smooth dressing. Add a little more oil if you fancy, perhaps some from the anchovy jar. Season with black pepper.

Cook the beans in boiling water until just cooked, then drain and pour over the dressing while still warm. Mix in the sliced shallot slices and serve.

Oops…finished 3 of the 4 jars I brought home already…