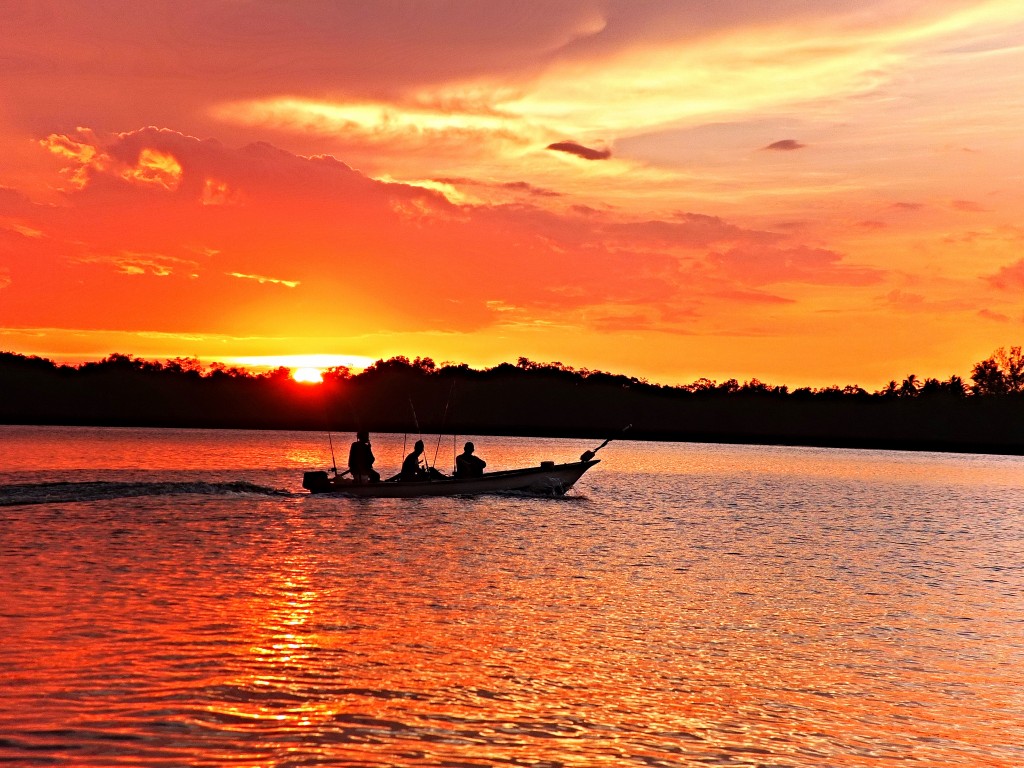 Let’s get something clear from the very beginning: Borneo (that’s the top bit of Borneo, East Malaysia to be precise, Sarawak to be even more so), is really, really hot. We’re talking 35 degrees, but then 80% humidity, so what that ‘feels like’, as the Met Office so very helpfully like to tell us, is actually 45 degrees. That’s warm. That’s serious. That’s ‘don’t go out doing karaoke until 4am because you might nearly be hospitalised the next day’ hot, but we’ll come back to that later.

For now, I shall tell you why you absolutely must visit Malaysian Borneo. It has a lot to do with the food, but I expect you guessed I might say that. I saw two sides to Sarawak: the remote, dense jungle side, and the city of Kuching, which is home to around 350K people. They both have their charms. They’re both full of good things to eat, and I am now ready to re-live the experiences here on these pages without crumbling into a jellied heap because I just want to go back immediately.

What do I want to eat when it’s really hot? Well, still quite a lot, as it happens, but particularly, a nice cooling ceviche-style dish of fish cured in lime juice. The Malaysians call this umai. I was present at a demo of how to make umai at The Sarawak Cultural Village, which is a place to learn about the indigenous tribes of Sarawak, about their different housing, traditions, diets, sacrificial rituals…uh huh. The Malaysians are no longer head-hunters, but there are still skulls at the cultural village, left as offerings to the spirits. 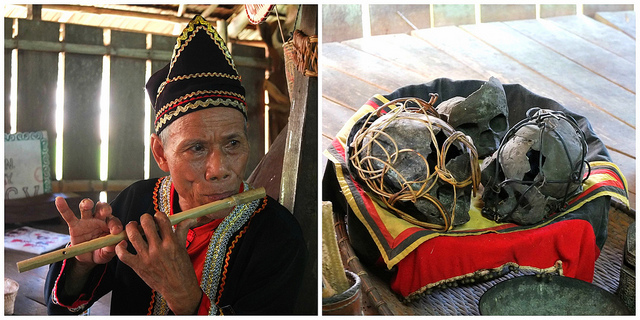 To make umai, the flesh of a mackerel was sliced, then marinated in the juice of teensy, grape-sized calamansi limes, a fruit native to Sarawak. Sweet and fragrant, I bought fistfuls in the market and stuffed them into my suitcase and then into my freezer on arriving home. There’s chilli in the dish, too, potent green and red flecks, and there is plenty of hot, fresh ginger. It’s the kind of zing you crave in a country that’s stifled your appetite and soaked your clothes. 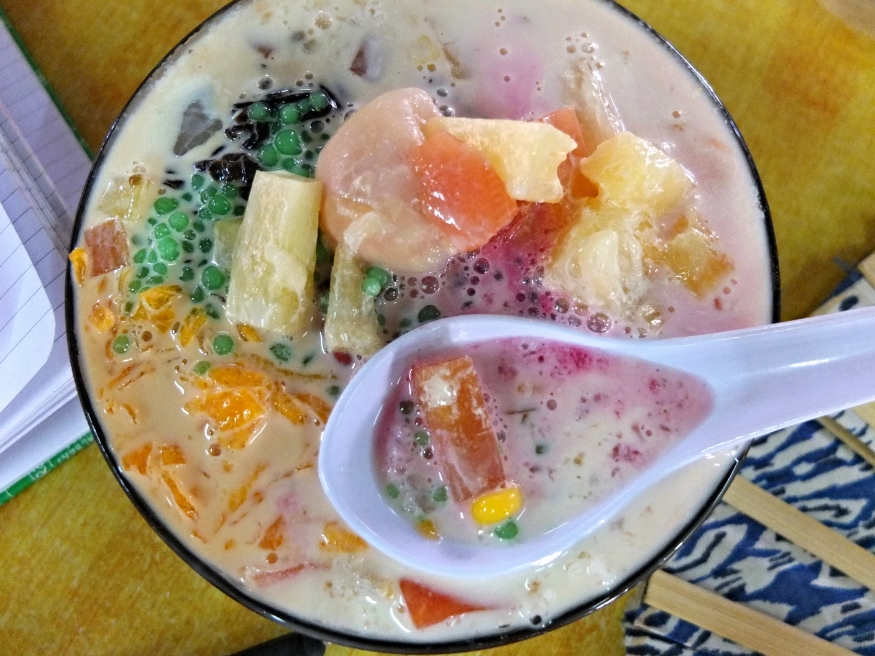 There are other ways to cool down, of course, and the disco-ball dessert ais kacang is one of them. They love a bowl of shaved ice in Malaysia and this is one that comes looking like an explosion in a costume jewellery box. There is tapioca, dyed lurid colours, popping like roe on the tongue. There is jelly, coconut, ice cream, fruit. As far as I could tell any combination goes and for all that it looks like a kid went crazy in a sweet shop, it was so silky in the mouth, sweet and rich with milky liquid. I kept going back for another spoonful. It was solace away from the bustling market across the street, in which I had to buy a hand fan – the hand fan I was not to be separated from for the following four days.

The market, however, had been huge fun. We slopped around in our flip flops, pausing every now and then to point, grab handfuls of ingredients and rustle them into brown paper bags. We sucked back long drinks of fresh coconut water, bought spices, vegetables and anything else we thought might survive the 14 hour plane journey home. I loved the pointed, pink torch ginger flowers (hard to find in the UK), which I bought too many of, then had to keep in the hotel minibar. Meat and fish were out, of course, but fresh turmeric was very much in, along with lemongrass I have never seen the like of. Cinnamon sticks were long brown wands, and I mentally calculated how many tiny sticks I would get from one large one, to be popped into a tiny pot and sold to clueless punters back in London. I longed to bring laksa leaves, but knew they wouldn’t survive the journey. 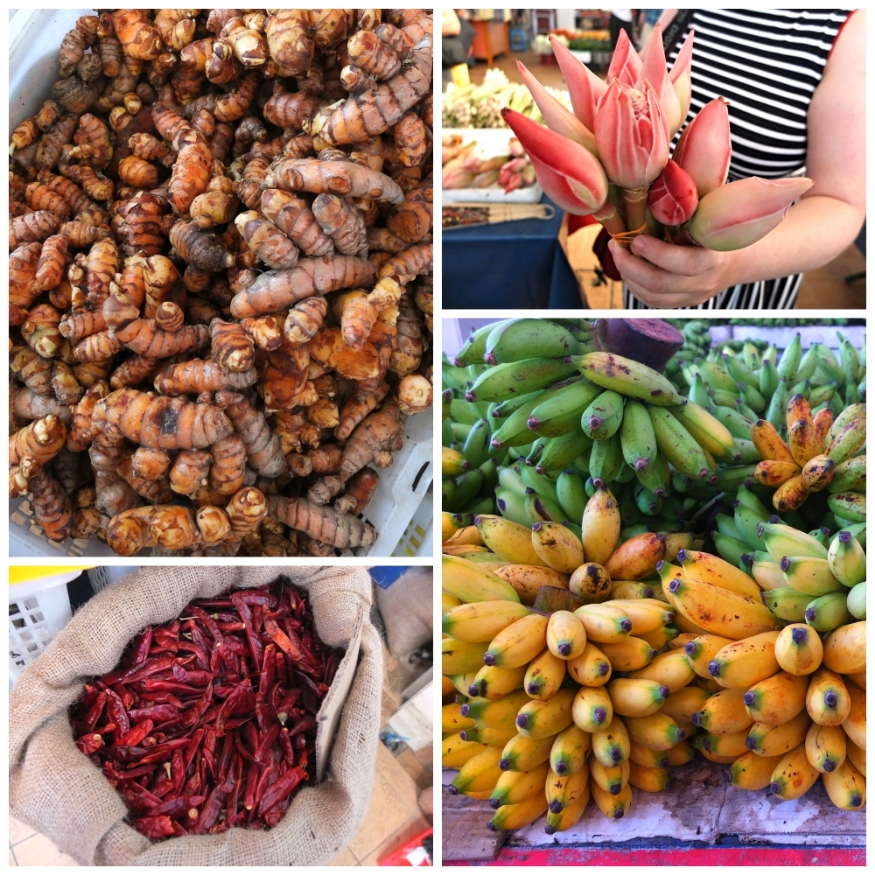 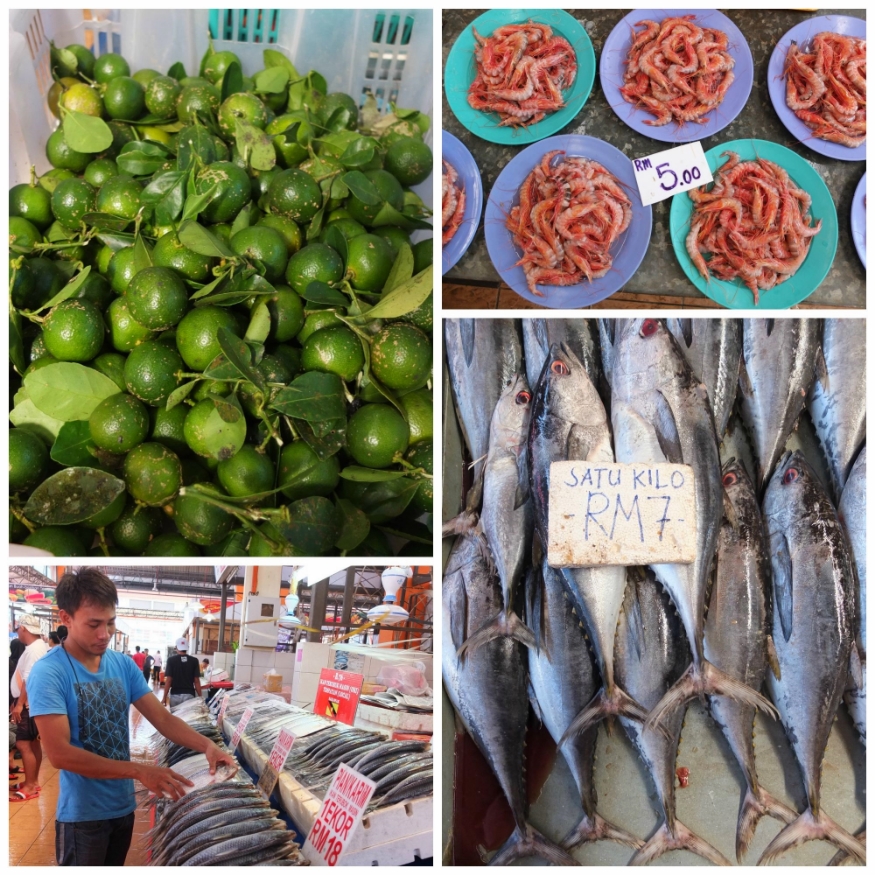 There are cats everywhere in Malaysia, a breed with short tails. Kuching literally mean ‘cat city’.

The laksa is a Peranakan dish, which means it’s the result of a fusion of Chinese and Malay cuisines. We ate many of these rich noodle soups, funky with dried shrimp, seafood, and sometimes bouncy fish balls, hot and slippery in the mouth. The Sarawak laksa is lighter than others, less creamy with coconut milk. It delivers a smack from the addition of tiny Sarawak peppercorns, which are favoured now by top chefs for their pungency and aroma. We see them on the tree, green and tiny. The other famous dish of Malaysia is satay of course, and everywhere we go, glazed meat is being turned over coals, many hands twisting tiny sticks. We even eat it on the plane, as Malaysian Airlines have a fantastic satay trolley, but that’s a story for another day. By the end of the trip, I am well and truly ‘satayed-out’ – a month or so later, I crave it. 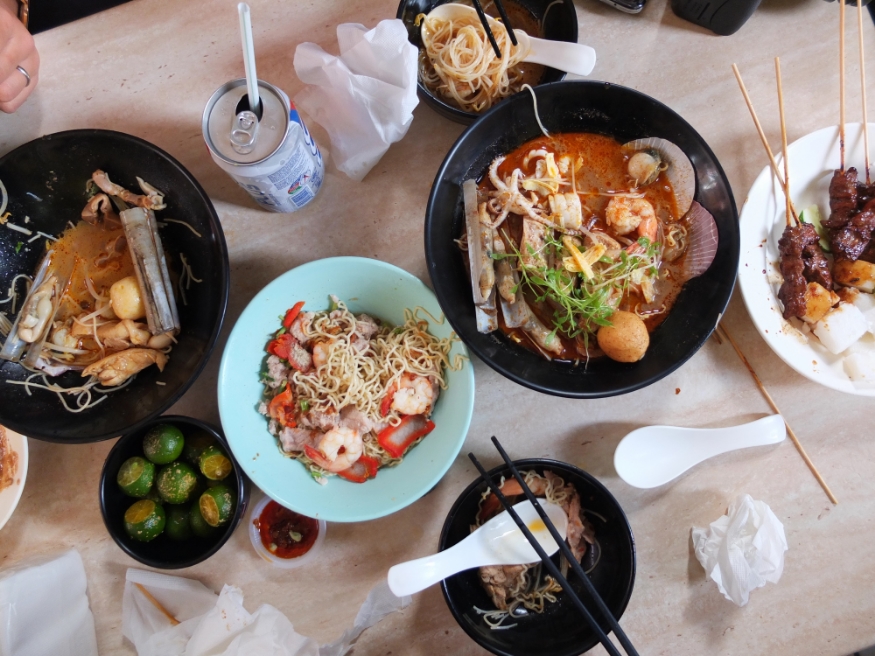 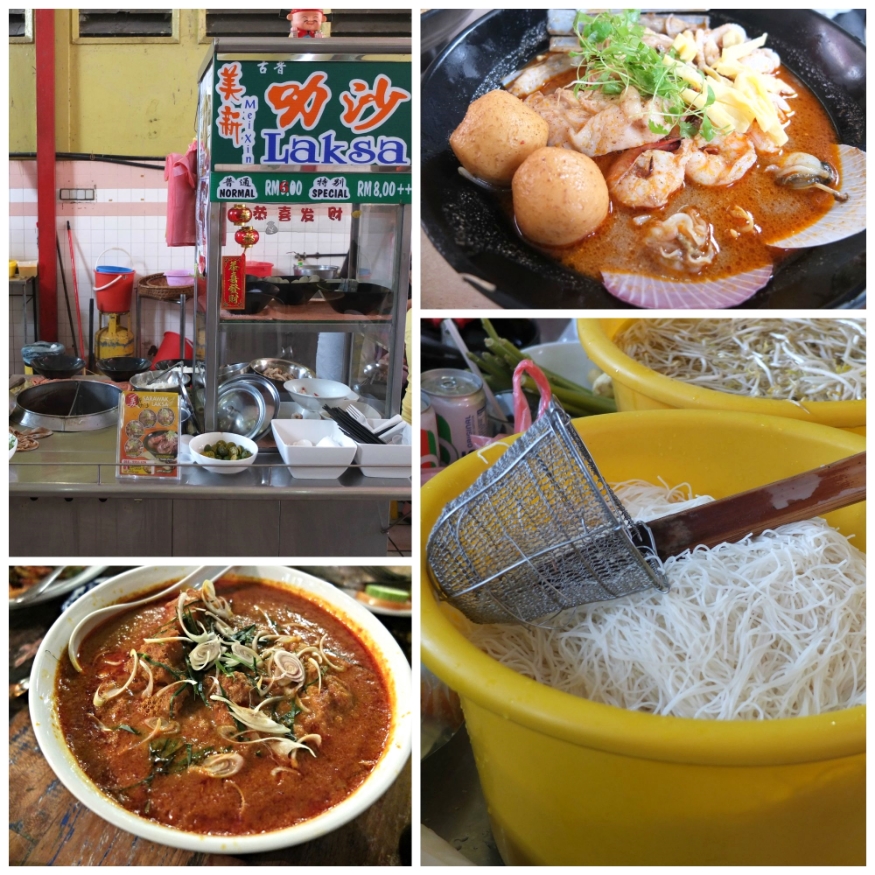 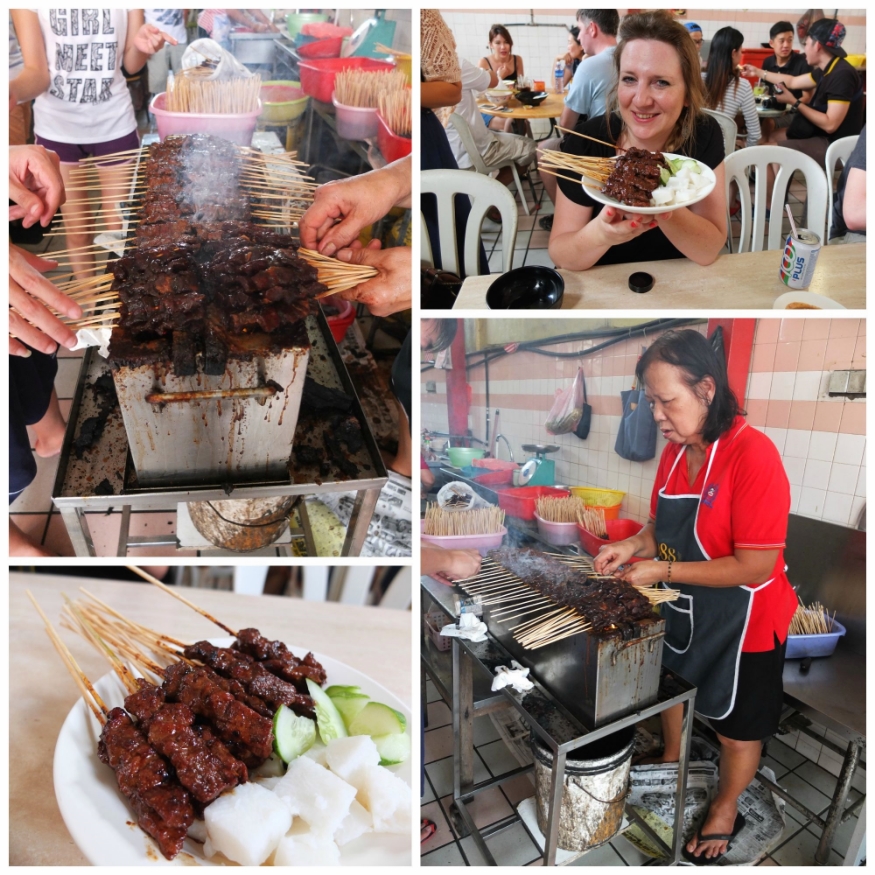 Seafood is abundant, and I get very excited on the first night when I learn of mud crabs on the menu at a restaurant, Lim Hock Ann Seafood. My favourite ingredient in the whole world, and a species I have never eaten before. We order a plate and it turns out to be the dish of the evening; so good in fact that we order another. Each tiny crab is coated in an earthy sauce, which tastes both familiar and wild; it’s reminiscent of murky underwater places and the dark corners of shells. 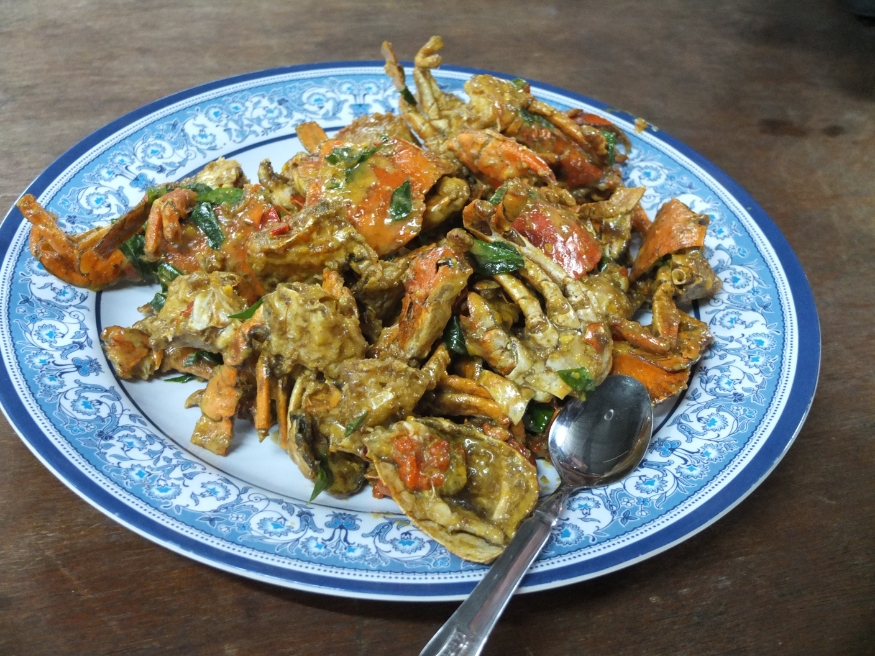 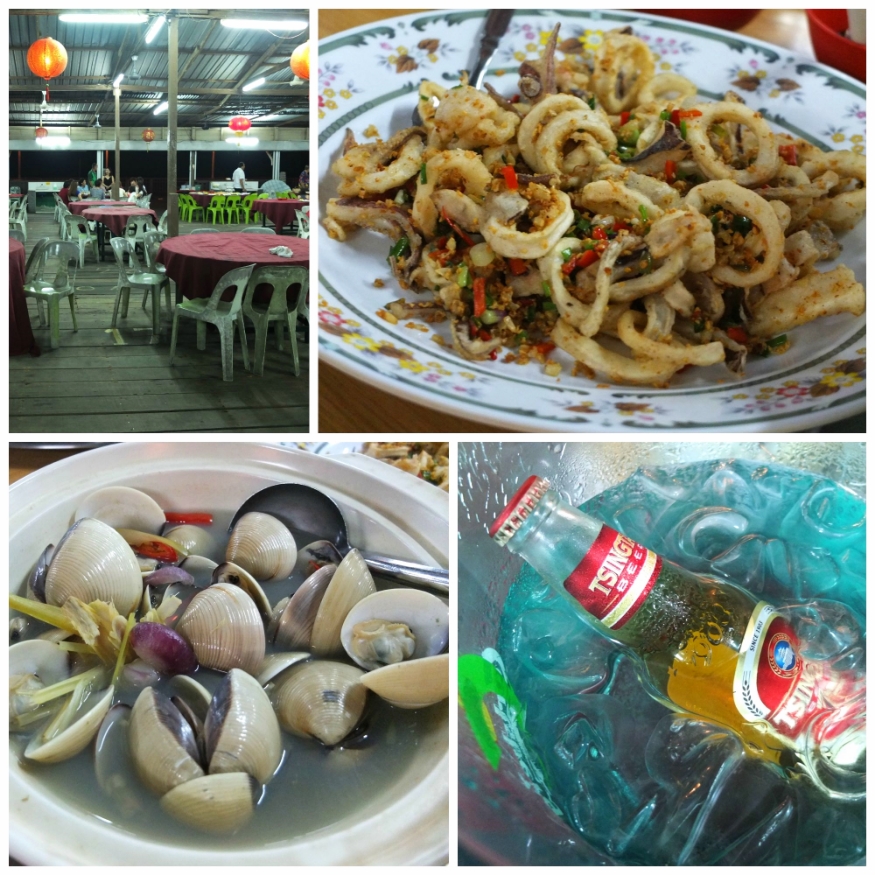 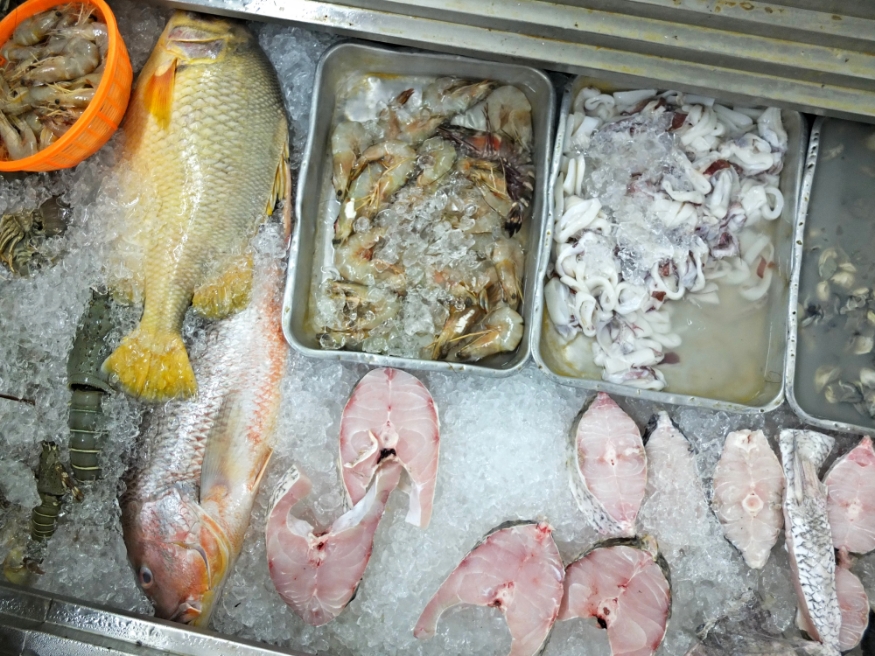 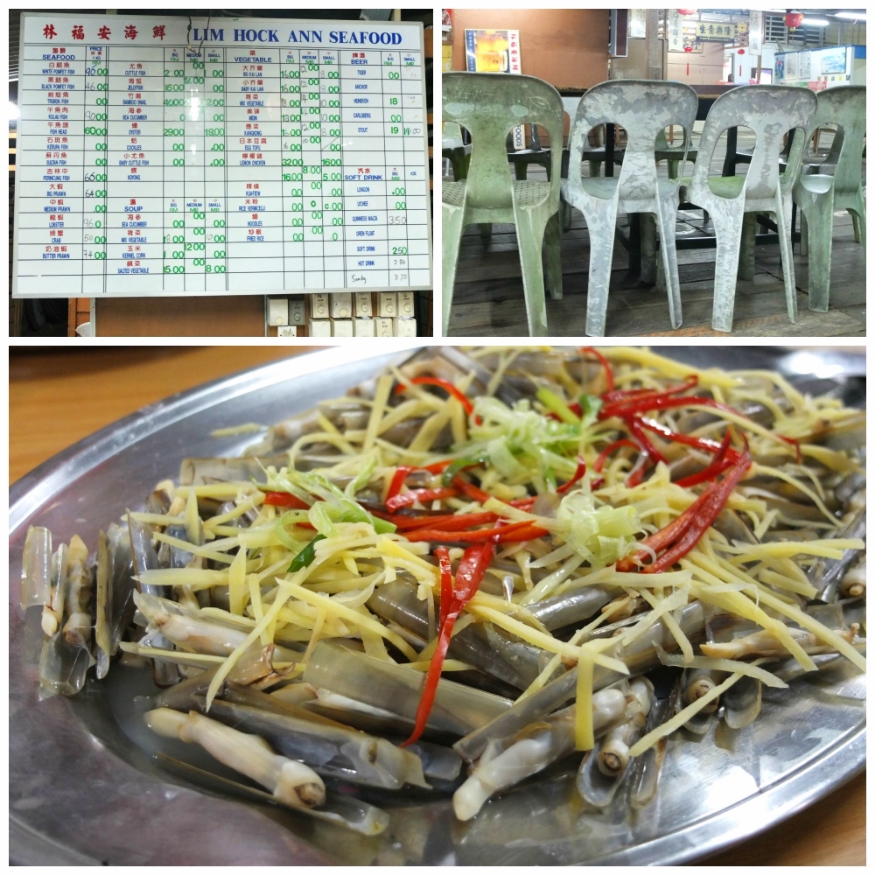 As the days go by and our group bonds together, we let our hair down and hit the town. There is dinner, booze, karaoke. The next day, there is one of the worst hangovers of my life. Don’t underestimate the heat, guys, because dehydration is no joke. I find myself on a bus, having a discussion about whether or not I should seek medical treatment. In the end we settle for rehydration salts and bed, which works, but the feeling of shame lingers on well after the hangover has eased.

There is much salvation to be found in noodles, I learn, and we get through many different bowls on our trip; they ease pains, soothe frazzled nerves, provide much needed energy and stain many tops. Polok mee turns out to be a particular favourite, coming in two parts – a bowl of noodles and a bowl of meat soup, to be added together at the table. It’s deeply savoury and slurpable. It’s also MSG laden, which is fine by me. 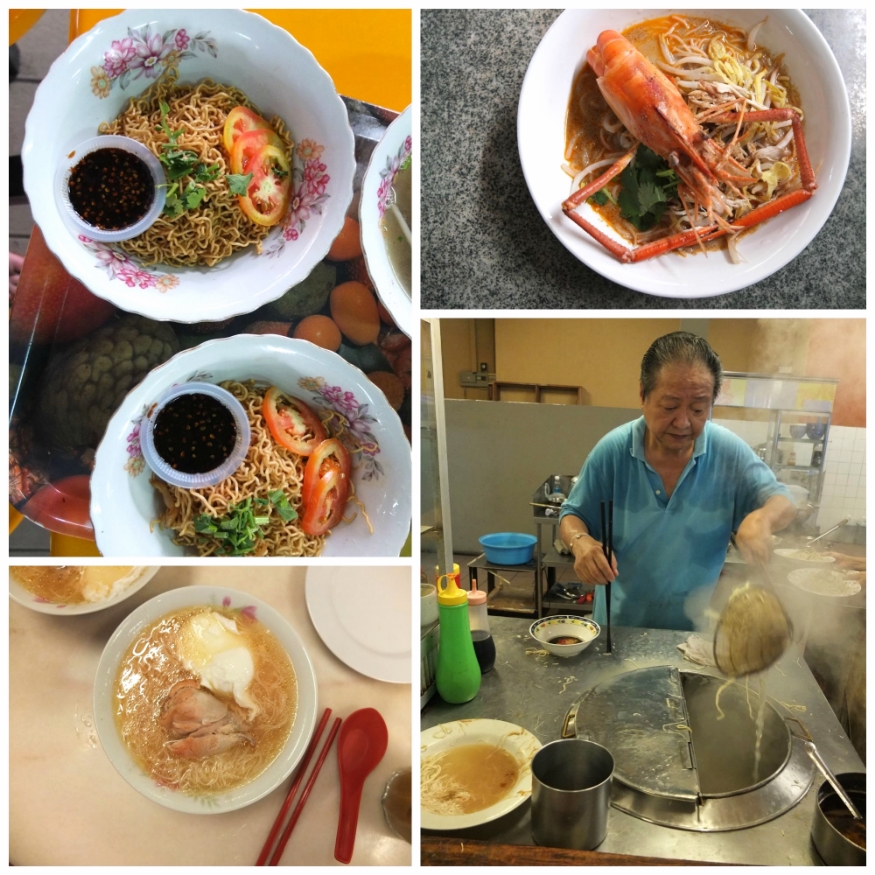 Everywhere you turn in Sarawak, there is something beautiful to see, a photograph to line up, wildlife to wonder at. We gawp at sunsets so stunning and intense they’re all fire and brimstone and then puff! They’re gone. This is close to the equator and the sun sets fast. The position of the country in the tropical belt is obvious in the flora and fauna, too. We see carnivorous plants, dense jungle, fireflies and proboscis monkeys with their noses like willies. Best of all, we see the magical orang utans. Hanging in the trees, their fuzzy silhouettes lit up by the sunlight, their long limbs powering them between branches; they’re steady, graceful and powerful. 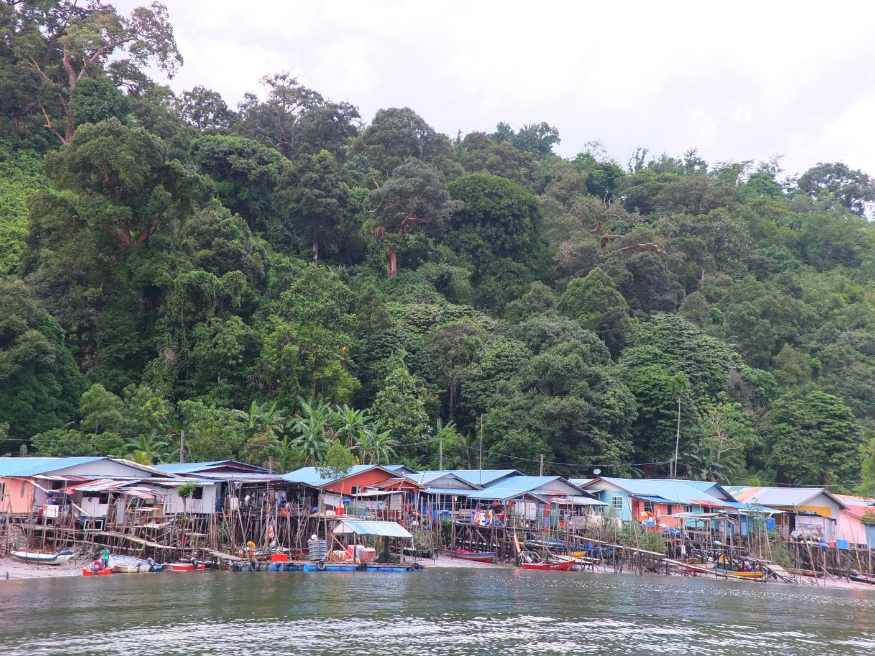 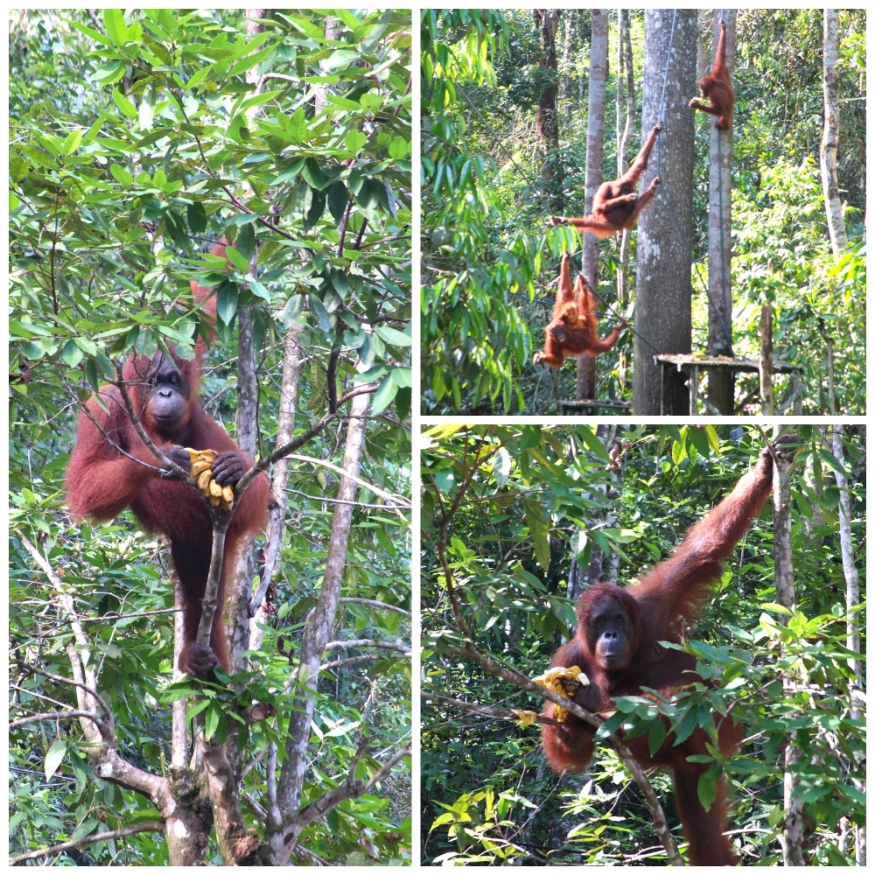 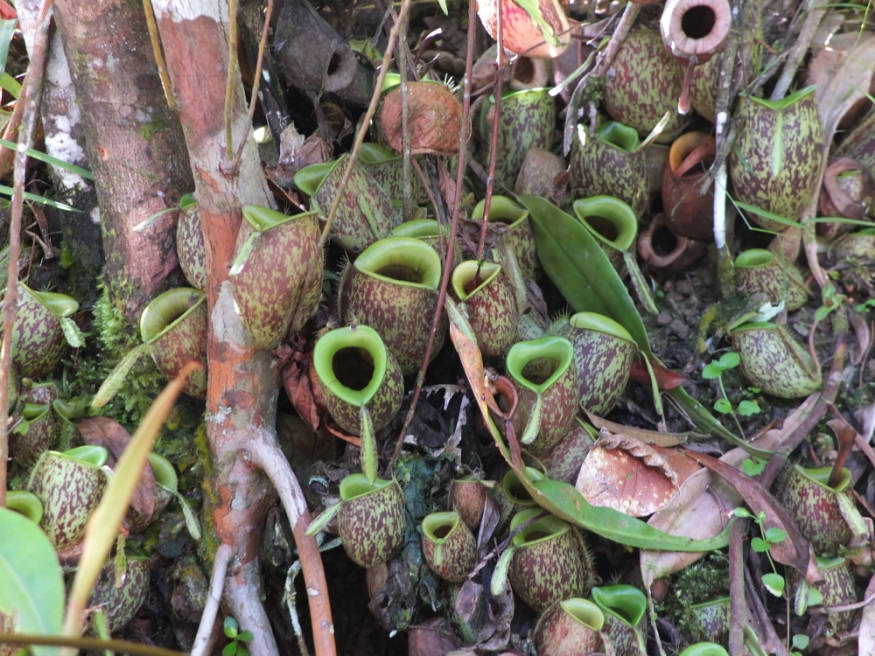 We see flying fish and crocodiles. We take river trips and get bitten by mosquitoes. Feet are planted into white sand, frosty beers supped to the sound of waves and dry palms rustling in the wind. It might be hot as hell, but it’s a country that grabs you by the scruff of the neck and shakes you about with its intensity. It is a country for the adventurer, both cultural and culinary. I would go back in a heartbeat. Just as long as there’s no karaoke. 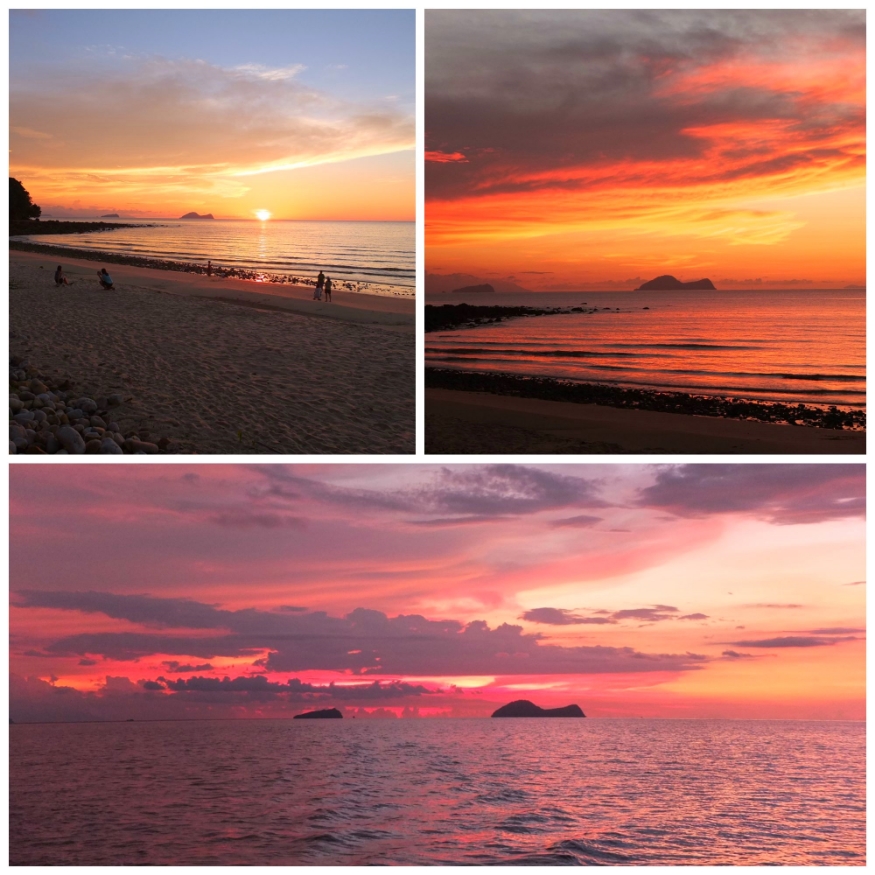 My trip to Sarawak was sponsored by Malaysia Airlines who are the only carrier to offer a twice daily non-stop A380 full service link between the UK and Malaysia. UK passengers can also take advantage of frequent onward connections to destinations across Malaysia, Asia and Australasia. Economy class return flights from London Heathrow to Kuching via Kuala Lumpur International Airport start from £817. Business Class from £3167 (prices including taxes and charges). To book visit www.malaysiaairlines.com or call +44 (0) 871 4239 090

If you are continuing to Kuala Lumpur then I can recommend The Majestic Hotel Kuala Lumpur where rooms start from £170 on a B&B basis.