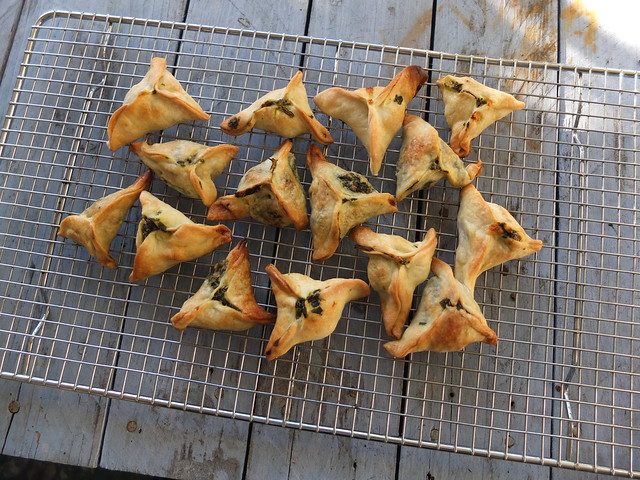 Beirut was quite peaceful when I visited back in April. There was a lingering military presence on the streets but hey, what’s a few machine gun armed soldiers and the odd tank between neighbouring countries? Our main concern when we were there wasn’t safety, but trying to find things. You’ll see what I mean if you go. No-one has any idea where anything is, especially not taxi drivers, who will stop several times on each journey to ask people for directions. It’s a disorientating place of many contrasts, without any real sense of cohesion. Hardly surprising.

We had been trying to find a market, Souk el Tayeb, which was apparently Beirut’s ‘first farmers’ market’. Despite a fairly central location we were flung from a taxi nowhere near it, and we’d been wandering up and down empty streets for half an hour or more. The buildings in the area are new, but old in style, which makes for a strange atmosphere – a bit like being in the middle of a film set. I imagine. Anyway we turned a corner and there it was, a very modern looking market that wouldn’t be out of place in the UK, with plastic gazebos and olive bowls. 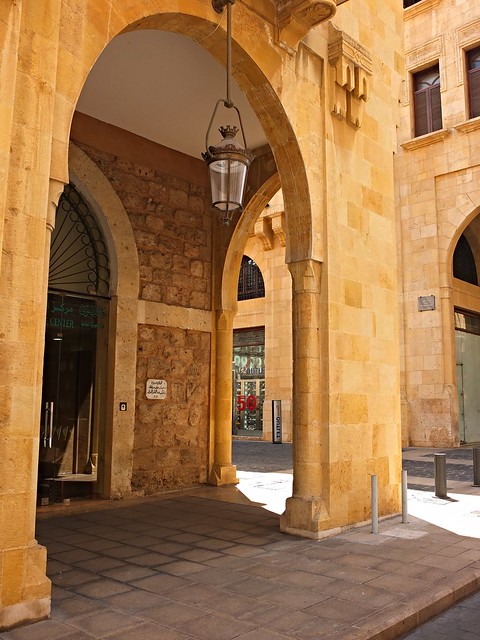 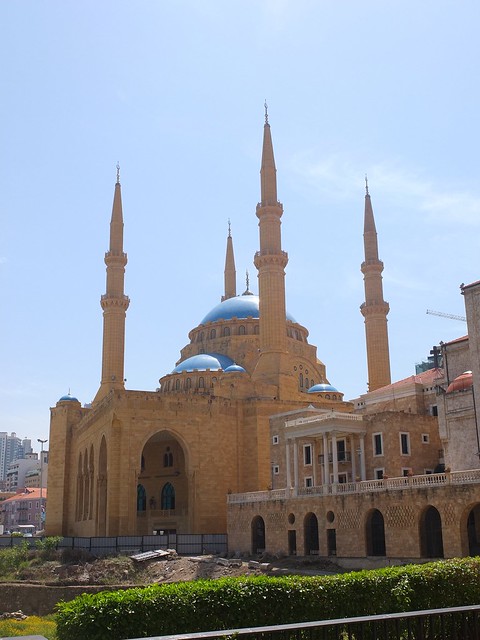 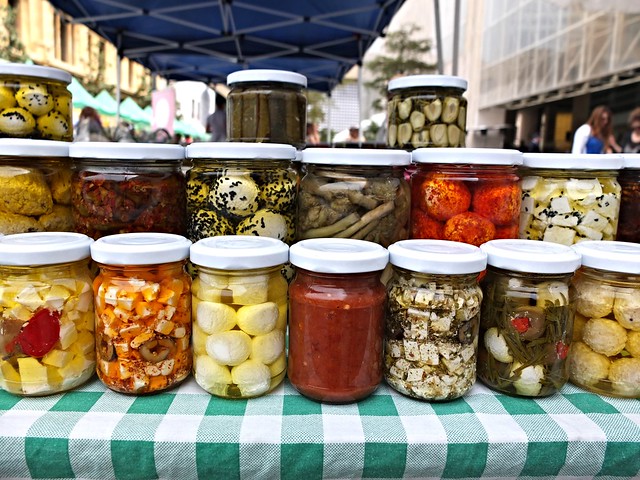 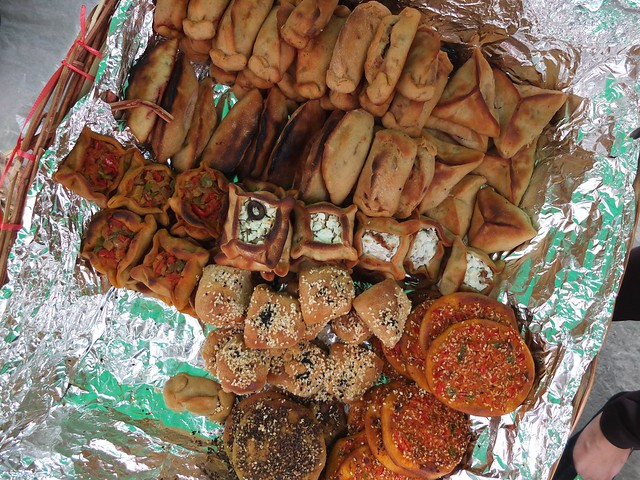 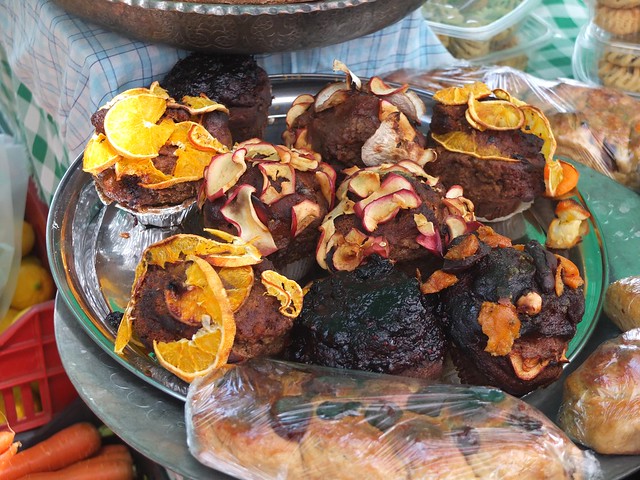 There is also a restaurant associated with the market called Tawlet, the aim of which is to show off the talents of chefs from different villages around Lebanon, and also to use produce from the market. The food is great, but you should know that it’s nowhere near the market. Just a heads up. Nobody knows exactly where it is, of course. Our taxi driver stopped the car several times, wandered in and out of shops and did a lot of pointing and head scratching before we worked it out ourselves and told him where to go. It helps a lot if you speak French, by the way. Most people will speak a little English, but will more than likely be fluent in French. 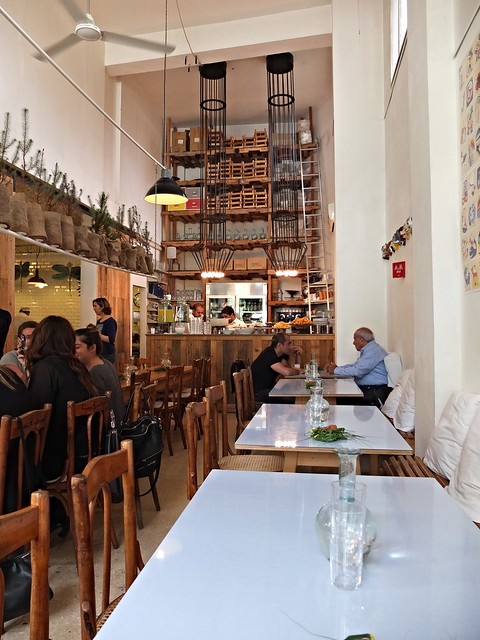 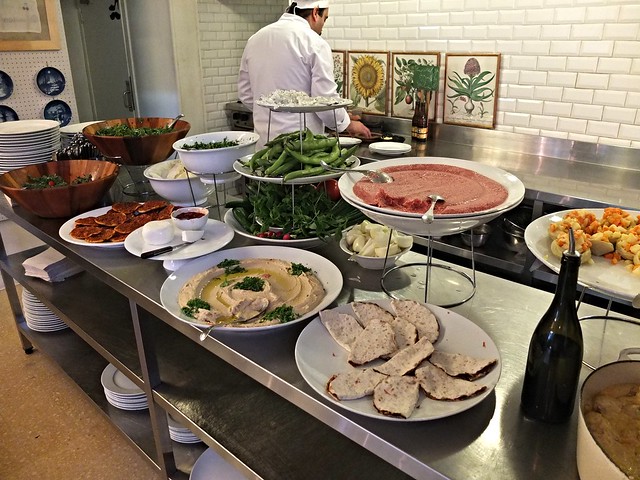 Heaven is the buffet at Tawlet. Hummus, labneh, flat bread, herbs, artichokes, tabbouleh, cheese, peppers, yoghurt, kibbeh nayeh. On the right were dishes of rice and lentils. There was a dessert counter elsewhere. 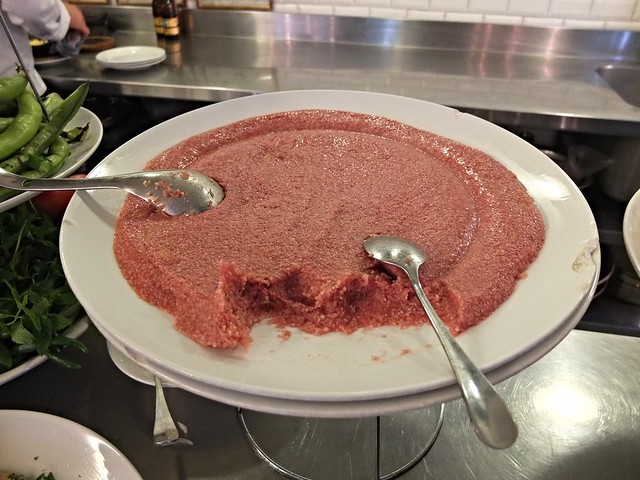 A close up of that glorious kibbeh nayeh (raw lamb with bulgur, onion and spices) 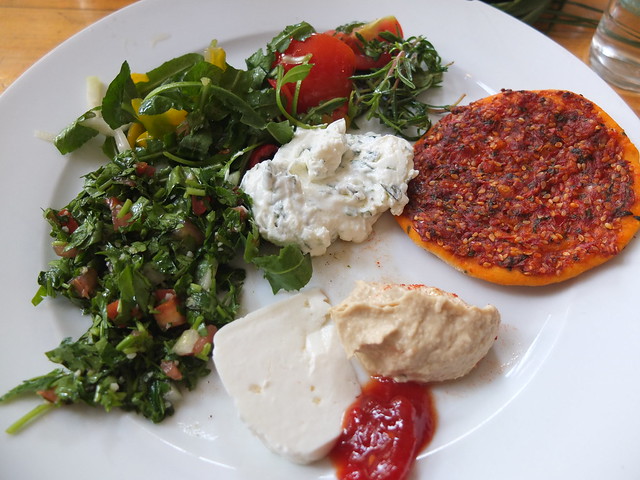 Don’t mind if I do. See the rosemary at the top – it was very young and soft and used as a sort of salad leaf. A lovely idea. 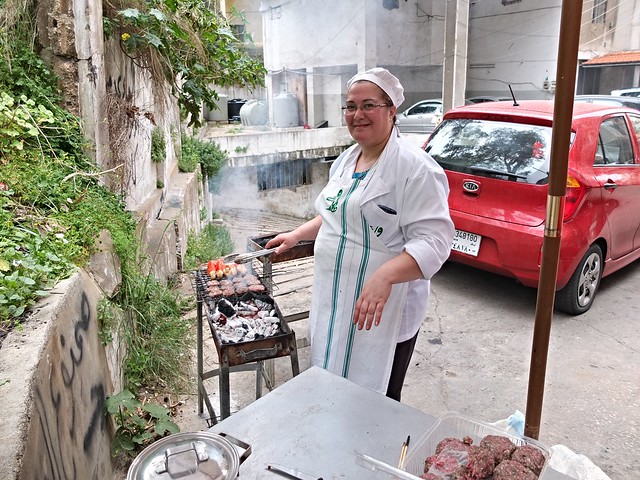 This lady was cooking on a rickety grill at the front of the restaurant. 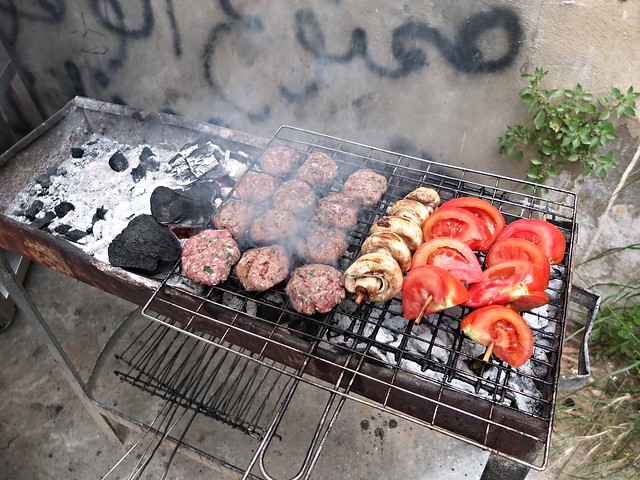 So anyway, it inspired me, this market, or rather a particular woman inspired me with her folded flat breads and her man’oushe. She made a triangular arrangement stuffed with onions and a very lemony tasting leaf which I thought had to be sorrel. I’ve since learned that it grows in the mountains in Lebanon. Well done, taste buds. Combined with the sumac it makes for a sharp filling which is excellent with rich cheese. I came across some sorrel at a UK market recently and off I went to make pastries. I fashioned them into little triangle shapes because frankly they look really cool and they’re actually pretty easy to do. Mine lack a little finesse, granted, and the filling kind of burst out a bit but it’s hard to completely stuff them up and I’m quite cack handed at baking. We scarfed all of these in one sitting. For breakfast.

I’ve so many recipes I want to make based on my trip to Beirut so it’s about time I pulled my finger out and got on with it. Next up, the hummus recipe that has been torturing me for six months. 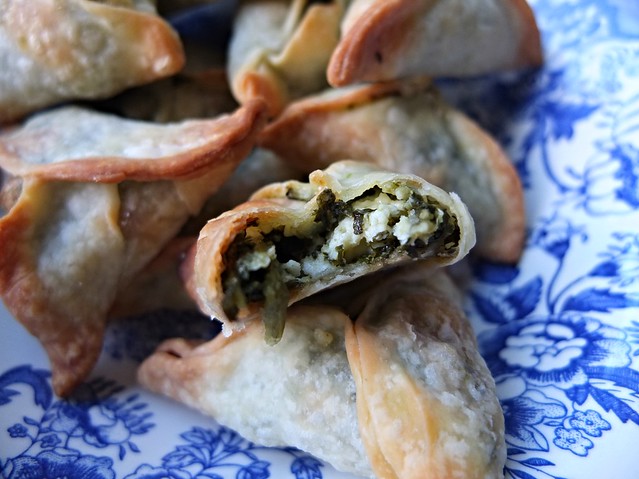 This super silky dough recipe is courtesy of Peckham Bazaar

Mix salt and flour together then mix in the oil. Slowly add water to make a dough, then leave to rest for 45 minutes to an hour. Now make the filling.

Cook the onion gently in about half a tablespoon of oil, until it is soft but not coloured. Add the garlic for a minute or two, stirring, then set aside to cool. In a large pan, add the freshly washed spinach and allow to wilt down. Add the sorrel at the last minute and allow to wilt also. The sorrel will wilt quickly and turn a murky colour which is sad but normal. Set the leaves aside to cool, then squeeze out as much water as possible. Roughly chop them, then mix with the onion, sumac and cheese. The amount of cheese is up to you, but it’s best to have just a little I find, otherwise the pastries are too rich. Taste, then season with salt if necessary.

To assemble the pastries

Once the dough has rested, get your corn starch, luxuriate in the bonkers weirdness of the feel of it (it also makes a non-Newtonian fluid if mixed with water). Spread the corn starch on a work surface. Divide the dough into small balls. Cover in the starch, cut the ball in half, cover both halves in the corn starch and push back together. Then roll out. You want it to be about the thickness of a 50p coin, not mega thin.

Use a glass or something similar (I used the bottom of a cocktail shaker) to cut circles from the dough. Put a blob of filling mixture in the centre of each circle but don’t over-fill, about a heaped teaspoon should do it. Brush the edges of the circle with oil then bring up one side, and pinch in the other side until it meets in the middle. It’s hard to describe this but actually very easy to do, just have a go. Pop onto a baking tray, brush with beaten egg, and bake in the middle of the oven for about 20 minutes or until golden. Cool on a wire rack.