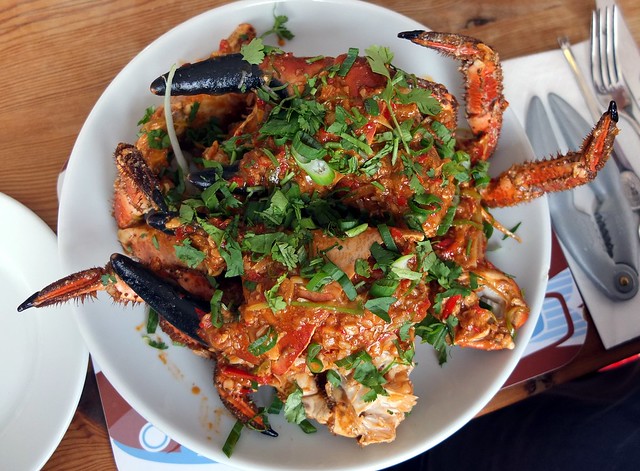 “I don’t understand why everyone is so cynical about ‘Padstein‘” says the lady I’m sat with at lunch, “before Rick (Stein) opened restaurants here, Padstow was a bit of a dive”. We’re eating Singapore chilli crab, and our mouths, hands and aprons are covered with intense, spicy sauce and crab meat. We’ve cooked the crabs ourselves, at Stein’s seafood school. I think about what she’s said, and it’s true; I’ve seen people sneer at the mention of Padstow, arguing that Rick (and his ex-wife and business partner Jill) have ruined this picturesque fishing village by drawing in tourists. They’ve brought a lot of money with them, though. Be reassured that there are other chefs cooking in Padstow, and what’s more, people know about them.

At the seafood school we’re given a demo of the dish we’re about to make, by a guy called Mark Puckey, who has been with the Steins for years. He plucks each hulking crab from an ice bed; they’re males, 1.2 kgs if memory serves, fresh as you like and importantly, very much alive. For some reason, I’ve never shown crabs the same courtesy as lobsters when it comes to cooking, the latter always taking a nap in the freezer first. The crabs though, straight into the pot every time. I am ashamed to learn that the most humane way to kill a crab is quite different, and it is done by using what is – let’s not beat around the bush here – a big metal spike with a handle on it.

The way to do it is to turn the crab over onto its back and lift up its tail flap; there you will find a hole. I think you know what’s going into that hole. You ram the spike in, then rapidly wiggle it around in a circular motion. This disables the crab’s nervous system. Then you turn the poor bastard over, find the natural depression right on top of its head and again, straight in with the spike. Hungry? Mmm. To be honest, this is a lot easier and less traumatic (from my end at least), than it sounds. In fact, I was worryingly efficient at it. 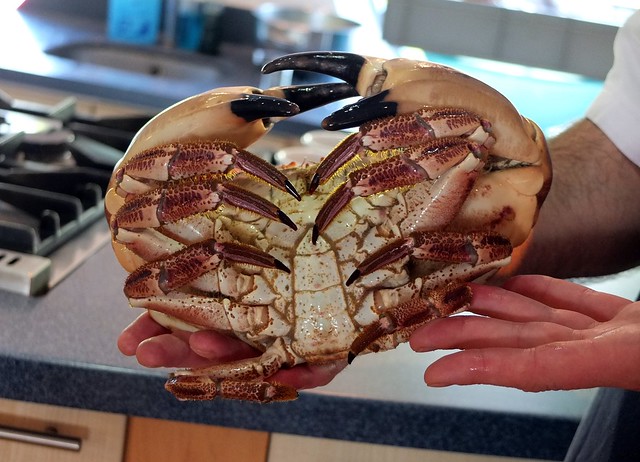 The best way to cook your newly passed crab is in seawater, but in the absence of that on your doorstep, chuck a shed load of salt in the pan. Oh and do make sure the pan is big enough; if they don’t fit it’s a nightmare, as I discovered once when cooking lobsters. Once the crabs are simmering, we spend a leisurely 40 minutes or so chopping bits and bobs for the sauce, and drinking a crisp glass of white. It’s just like being at home, except in a really beautifully designed kitchen with a professional chef on hand to hold down your crab while you ram a big spike…well you know. 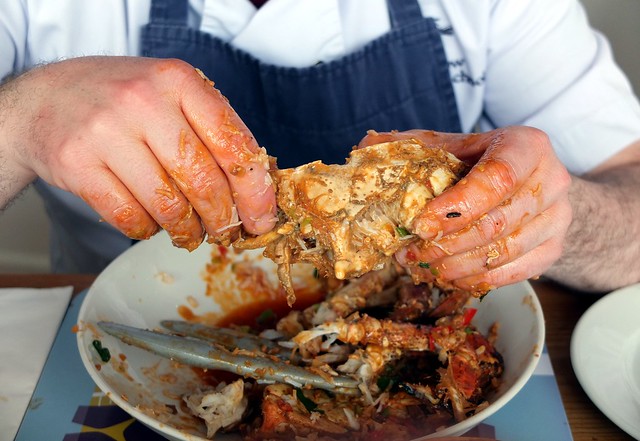 As we sit down to eat with yet more wine, a million napkins, finger bowls and crab-eating paraphernalia we marvel at the dishes in front of us; a whole crab each in the most incredible sauce, rammed with chilli and ginger, made super rich with the brown meat; so decadent. Half an hour is spent working over the beasts. Satisfied faces are stained orange. This is Rick’s signature dish, apparently, and I have to say it was spot on. I’ll admit that I was a tiny, weeny bit worried that I’d hate the seafood school, that it would be an attempt to squeeze as much money as possible from people at every turn, and yes, of course, there are books and Stein branded plates for sale but I can honestly say, I enjoyed every minute of it, I learned a lot and was as smug as anything when I sat down to that crab at the end. It just goes to show that, like the Padstein critics, it’s easy to be cynical about something you haven’t experienced.

This is obviously re-produced from the book and as such does not include the instructions for killing and portioning up the crab. Tim Hayward’s guide here is good.

Heat the oil in a large wok. Add the crab pieces and stir-fry for 3 minutes, adding the garlic and the ginger after 1 minute. Add the juices from the back shell, the tomato ketchup, red chillies, soy sauce, water and black pepper.
Cover and simmer over a medium heat for 5 minutes if the crab is fresh or 2 – 3 minutes if using cooked crab. Spoon the crab on to 1 large plate or 4 soup plates, sprinkle over the shredded spring onions and serve straight away.

I was invited to Padstow Seafood School