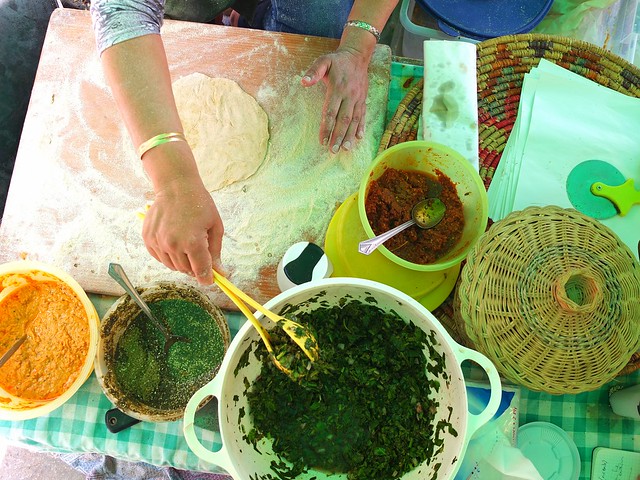 Beirut is a city of contrasts, the most striking being that of new wealth against a backdrop of quite obviously recent civil war. People parade barely healed plastic surgery around bullet pucked buidings. I was sad to read yesterday about a suicide bombing – the conflict in Syria is shaking the city once again. We spent a peaceful few days there in April, thankfully, which wasn’t nearly long enough. It’s hard to get to grips with as a city. I think my partner in travel, crime, eating etc. has captured the place extremely well in a post he wrote on his blog and so I shall quote him here.

“I’m looking at ‘happy cookies’, imported New Zealand lamb, organic salmon fillets (neatly vacuum packed) and I’m pretty certain I saw at least one person selling cup cakes. There were definitely chocolate brownies. Souk el Tayeb, the Beirut farmer’s market is an oddity. There’s something a bit wrong about the way that the small-scale agricultural produce of a country that still has a large amount of said small-scale agriculture is being packaged up and sold back to itself (at a hefty premium of course).

We’re in the main Beirut souk, where marble walls glisten; well-groomed Arab men partake of oversized cigars whilst strolling with their families. On display are luxury watches, expensive fashion, and now, labneh balls preserved in oil, bright turnip pickles, and cheery Lebanese women rolling out balls of dough to slap on their dome shaped grills; applying oil and za’atar, pre-sliced white cheese and the occasional dollop of chilli before rolling up their man‘oushes. As with so many a sandwich glimpsed in the wild, the restraint is what first catches the eye; really no more than a couple of ingredients, the pungent tang of wild oregano providing more than enough flavour to interest.

A gaggle of children are painting plaster casts of Easter bunnies. Over the road stand soldiers, their rifles lazily slung over their shoulders, chatting disinterestedly with some members of the city police.

You can’t go anywhere unless you’re in a taxi, though none of the taxi drivers have the faintest clue where anything is. The constant switching between Arabic, French and English spellings renders street names next to useless. Drivers will stop two to three times to shout questions at passers by for even the shortest of journeys. I’m left baffled as to what anything costs by the need to try and work out parallel exchange rates between Sterling, Lebanese Pounds and Dollars. Change regularly arrives in mixed currency format. A $50 note and 14000LP thank you very much.

Dusk turns pleasant roads derelict and less inviting corners terrifying. Cars careen about with little thought to their own safety. Eight hours in the city and we’d already seen two accidents. It’s as if the collective memory of civil war has rendered the concept of automotive safety null and void. Who needs seat belts when everyone can remember the acrid smoke of suicide bombs? There’s a Ferrari stopped at the lights on our left, next to it pulls up a battered Honda motorbike. The Greek Orthodox Christians are streaming out of their churches candles held votive before them. Chanting echoes out of the ornate facades, mingling with the amplified wail of the Muezzin call to prayer and the omnipresent chorus of car horns.

Three hours later and midnight has transformed the louche atmosphere of the bars from lazy afternoon drinking to a frenzied Faliraki street sprawl; bad cocktails and bottles of beer, aggressive posing and pounding Euro pop. I argue with a lingering taxi driver over the cost of the return to our hotel. Curse that the bar is closed and go instead to corner shop next door. The owner, smoking at the counter sorts me a quarter bottle of Arak and some ice. I retreat to my room for bed. Exhausted.” 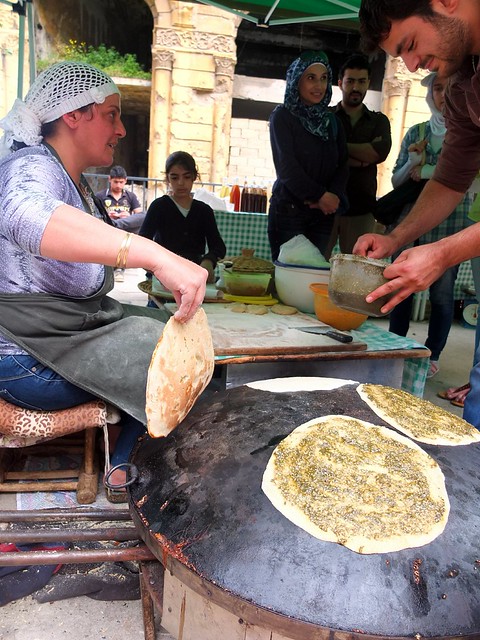 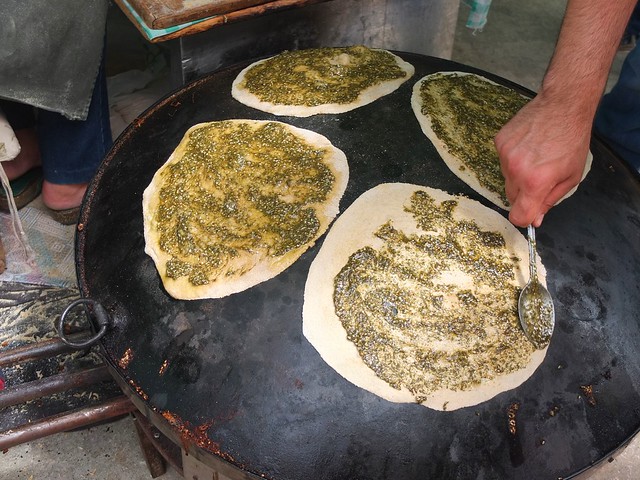 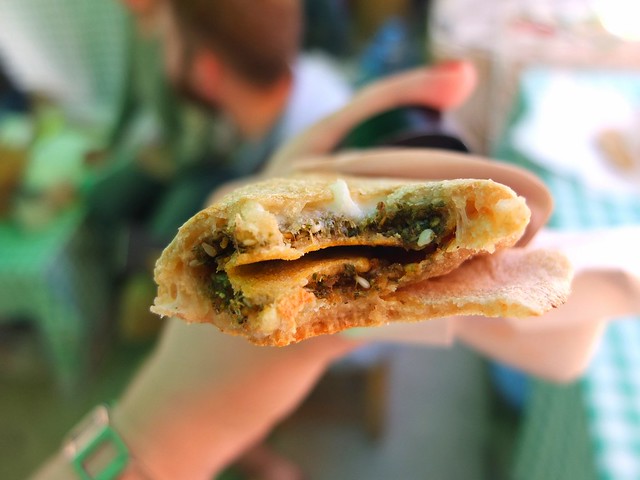 So yeah, that’s Beirut. At times a confusing and complicated place. The food however, is really something, and I came back to London significantly fatter. First up, these man’oushe, a Lebanese speciality. Yes, I am counting a rolled up flatbread as a sandwich, because it’s my blog and I’ll do what I bloody well like. I spotted the lady making these in the market and swooped in on her with the steely determination of a hawk hunting a mouse. She was perched next to a blistering hot dome, on a scorching day, slapping and scraping flat breads. They came painted green with za’atar, heavy with thyme and oregano and speckled with sesame. Superbly chewy, intense and rich with cheese. As ever though, there is more than one way to fill a flatbread, and I like to top my za’atar smear with pickles, labneh and herbs. The recipe below is from my sandwich book, 101 Sandwiches.

To assemble the sandwiches:

To make the flatbread, in a large mixing bowl, combine the flour, yeast, salt and sugar. Gradually add the warm water, mixing until you have a soft dough. Knead for about 5 minutes on a lightly floured surface, gradually adding the olive oil as you do so.

Rub a bowl with a little oil and place the dough in it. Cover with a clean tea towel and leave to rise in a warm place for about 3 hours, until doubled in size. Once risen, gently knock back the dough and knead again for a few minutes. Divide the dough into 8–10 pieces, then roll out into flatbreads, each about 1/4 inch (5mm) thick. Cook the flatbreads, 1 or 2 at a time, in a hot, dry large skillet for about 3 minutes on each side, until brown spots appear in places. The cooked flatbreads can be kept warm in a low oven while you cook the remainder.

To assemble the sandwiches, mix some za’atar with a little olive oil to make it easier to spread and brush it onto each flatbread while still warm. Top with mint and parsley leaves, some chopped tomato and red onion and some sliced pickles, then dollop with labneh. Sprinkle with sumac, wrap and eat immediately.

To make your own labneh, just mix a good pinch of sea salt with a 500g tub of full-fat natural yoghurt, then wrap it in a piece of muslin, tie the top with string, hang it over a bowl and leave in a cool place for about 8 hours or overnight. Use the strained yoghurt or labneh as required. Any leftover labneh will keep in an airtight container in the fridge for up to 3 days. 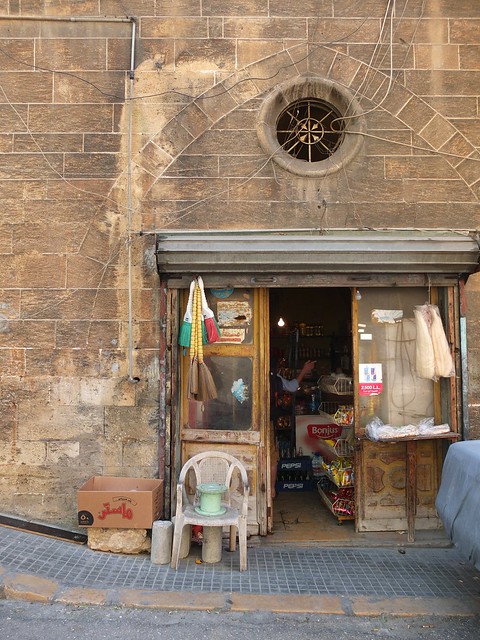