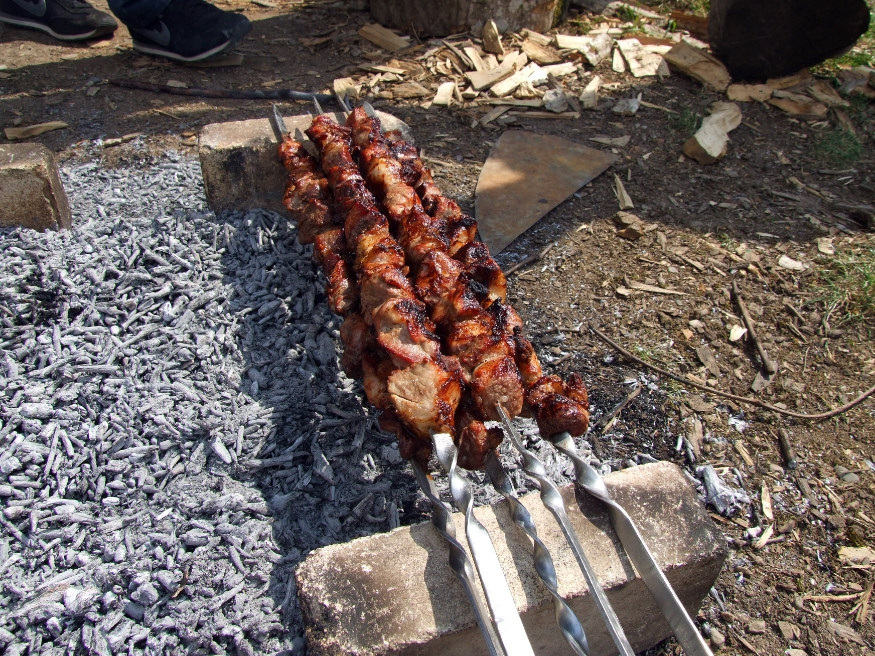 You may remember the post I wrote about the food markets in Georgia. There was also a post about the wine, for which I am sorry. If you’re particularly on the ball, you may have picked up on the fact that the post on Georgian food a whole 2 months ago was appended with the words ‘Part 1’. Ahem. Tum ti tum…

Of course you’ve all been e-mailing saying, ‘Helen, where is part two? We’re hanging on your every word oh wise one.’ Or not. One of the two. Anyway. So. Right. Georgian food, Part 2, plus, plus some recipes. Gawd, I’m good to you. You’ve no idea what Georgian food is like? Of course you don’t. No-one does until they visit or come into contact with someone who has lived there or is like, properly Georgian and really, how often does that happen?

So when I was in Georgia I went to a lot of meals called supras which are basically big feasts. There are lots of toasts during these feasts because the Georgians are well into toasting; I’m talking raising a glass and saying nice words here rather than burning pieces of bread. So they toast their ancestors and their friends but most of all they toast you because they consider guests to be ‘gifts from God’. It’s all rather overwhelming. Then they do this polyphonic singing thing which is rather moving too and before you know it you’ve made 10 new best friends and then 15 minutes later you decide they are actually your new family and you’re welling up and no it isn’t anything at all to do with the wine (little bit).

So I’ve been thinking a lot about Georgian food since my visit. I’ve cooked a Georgian meal with Kirstin Rodgers and I’ve visited a Georgian restaurant. The latter was very disappointing; they tried to make the food sort of ‘posh Georgian’, which totally misses the point. It’s like trying to do Caribbean fine dining or something (I had a heated discussion with someone about that once – different story). Anyway, there are a few recipes I’ve been meaning to lock down at home, like the BBQ pork and plum sauce I’m going to bang on about shortly. First though I’m going to tell you about some other things I ate and enjoyed and want to cook. 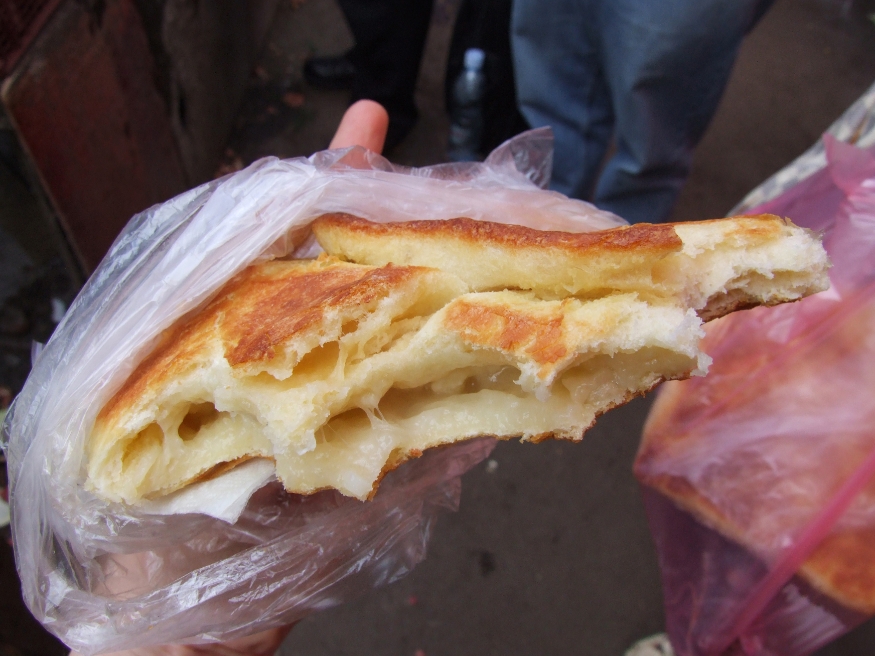 Kachapuri, or to give it its proper name ‘salty cheese bread’ (possibly the other way around). My salt tolerance soared in Georgia, which is truly saying something. I bought 3 slabs of this bread back with me and feasted on it, cold, for a couple of days until I started to feel sick and thought I might get food poisoning. Then I went to intensive care and was put on a drip due to dehydration (possible lie). 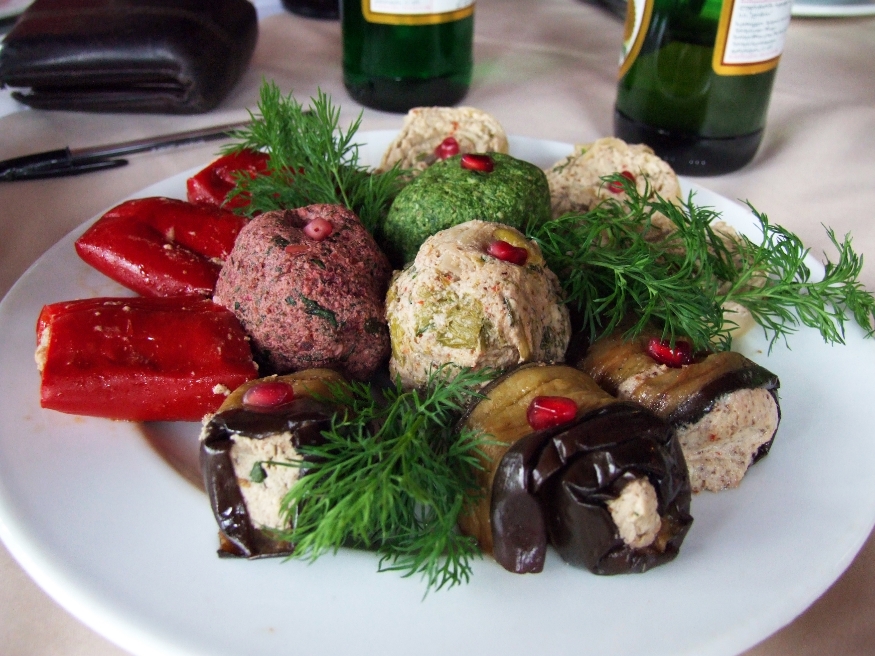 These ball thingies are called phkali (find my recipe here) and are made from ground walnuts (walnuts grow in Georgia so feature heavily), puréed veg such as spinach or beetroot, garlic and loads of herbs like coriander and dill. These would not be out of place at an Iranian meal; Georgian food has a lot in common with Iranian food actually, in that they use loads of fresh herbs, ground nuts, pomegranates, aubergine, yoghurt… 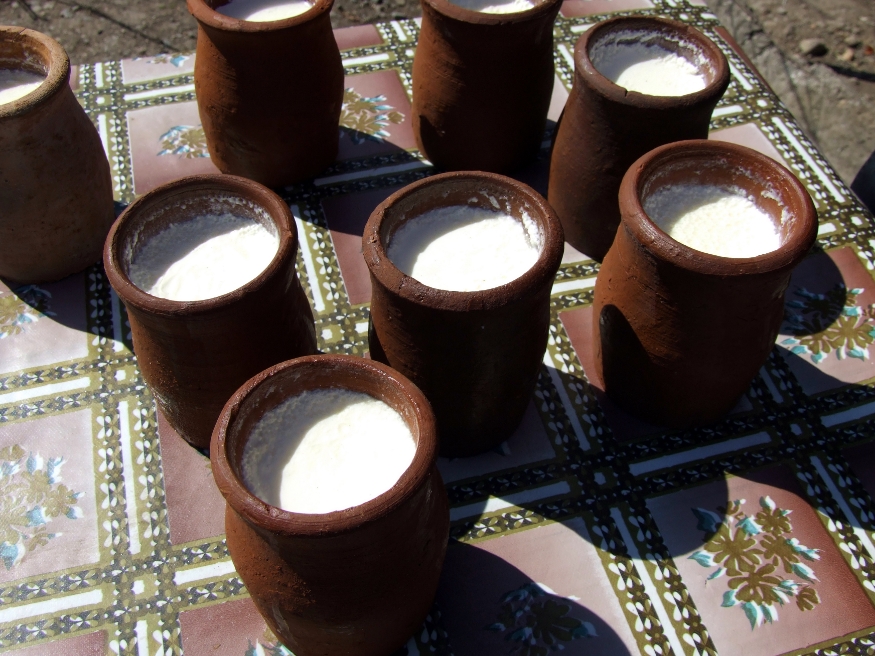 Behold! The buffalo milk yoghurt that brought me back from the brink of a hangover; I mean, I was actually at the crossroads, staring down the road of no return and then a shining white light started calling from a distance, ‘Helen? Heelleeeeeeen?’ The voice of soothing, stomach settling buffalo milk yoghurt. The Georgian mineral water has the same healing properties, FYI, drinkers, but it does taste pretty funky. Go with the yoghurt. 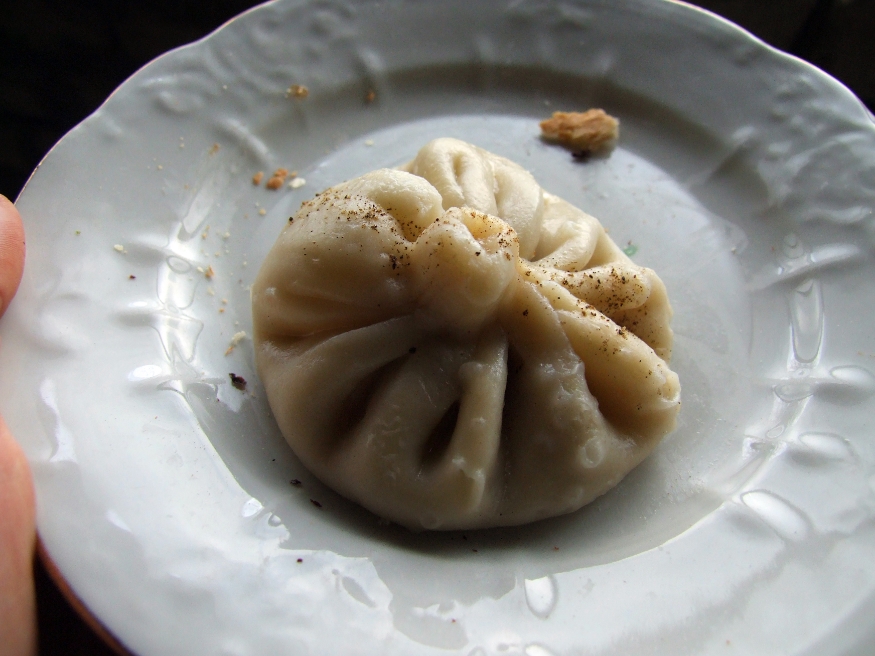 These meat dumplings are called khinkali; you hold them by the top nipply bit and eat them very carefully because they are filled with hot stock. I found this out the hard way, surprise surprise. Greedy. Impatient. Predictable. Then there’s some minced meat to enjoy, which is flavoured strongly with black pepper. I really enjoyed the fact that pepper was the main flavouring actually.

And so we arrive at the BBQ pork, which is grilled on mahoosive skewers as per the top photo and garnished with chopped shallots. The marinade I made is basically a load of this awesome chilli powder mix I bought in the market in Tbilisi (I think substitute with really good quality chilli flakes, mild chilli powder and salt) mixed with ground coriander, onion, garlic and a load of oil and vinegar. I actually didn’t mean to use as much vinegar as I did but I had a little jib out when pouring and sloshed a load in by mistake. This turned out to be quite the happy accident as it really tenderised the meat to silly levels and tasted rather awesome. Here’s my batch… I served it with the plum sauce (tkemali); there are red and green versions, with the former being sweeter. Mine turned out kind of orange. Hey ho. Obviously I had to use whatever plums I could find which was okay because recipes online all advised ‘just use unripe plums’. In June in the UK? No problemo. I grabbed the nearest supermarket punnet.

The finished sauce tastes quite tart and sort of musty in a good way, down to the ground coriander and heavy use of dill. It goes really well with grilled meat, particularly pork, which loves a bit of tangy fruit action. I was pretty chuffed with how well this turned out to be honest. It tasted almost identical to the stuff we had in Georgia. So there’s the story of how I threw some stuff in a pot and it came out really well by accident. Ta-da!

500g random unripe plums (supermarket ideal for this)
Juice 1/2 lemon
2 tablespoons olive oil
1 teaspoon red wine vinegar (not sure this makes any difference but put it in anyway)
3 cloves garlic, crushed
1 teaspoon ground coriander
1/2 teaspoon chilli flakes (think I used chilli powder or paprika or something)
1/4 teaspoon ground cumin (I used a bit more)
2 tablespoons each finely chopped coriander and dill (I upped the dill)
Salt and pepper
Sugar (it will need some sugar to balance it but the sauce should still be quite sour)

Plunge plums into boiling water then drain, get as much skin off as you can and attempt to remove the stones. I had to randomly hack the flesh off as best I could because trying to get stones out of unripe plums is pretty impossible.

Chuck everything apart from the fresh herbs in a pot with a mug full of water and cook it until the plums are all mushy. You’re supposed to blend it but I couldn’t find a blender in my mate’s house so I just kind of mashed them up with a fork and actually it was rather nice with a few chunks. Adjust sugar, lemon juice, seasoning balance, add the fresh herbs and voila! Georgian plum sauce. Let it cool down to room temperature before serving.