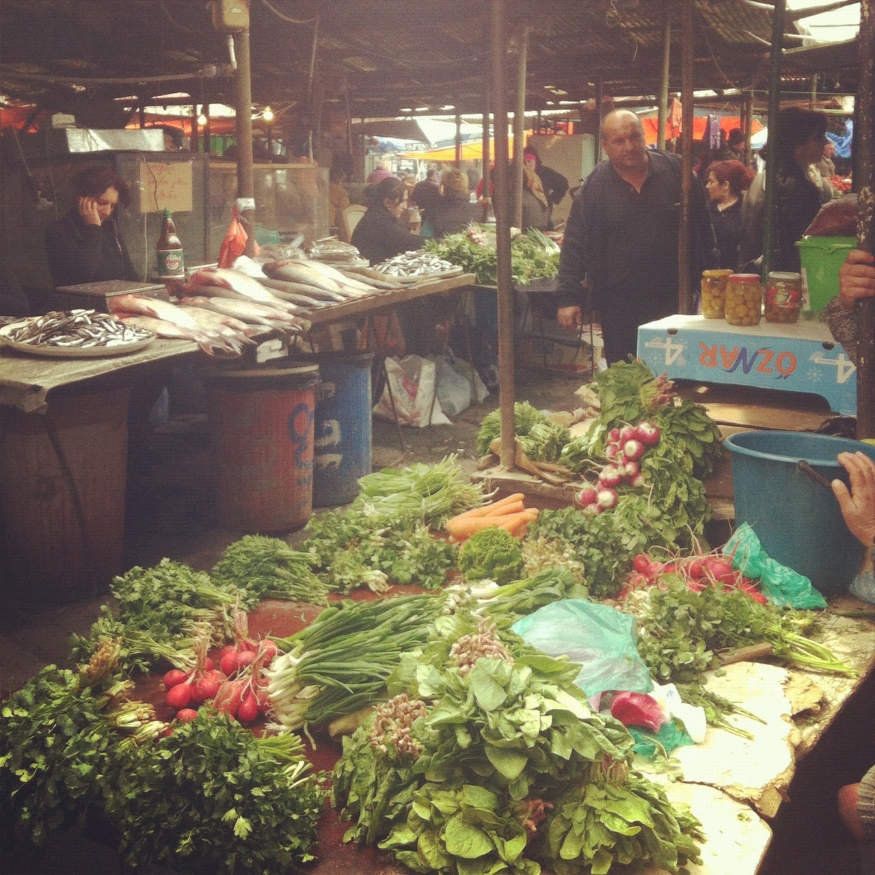 Have you ever considered visiting Georgia? I’m talking the country in the Caucasus region of Eurasia here, not the American state.

Nope, I hadn’t either. I barely had any idea where to stab my finger on a map, let alone any knowledge of the food, the people, the wine; all of which, I found out last week, are very loveable indeed.

The Georgians are remarkable characters, famous for their hospitality; warm, open and generous, their eyes sparkle and their laughter flows. My first real encounter with the locals was in the food market we visited in Tbilisi, Georgia’s capital. The Georgians are not yet so used to tourists that they have become jaded; they welcome you to their stalls to taste food, without any expectations that you will buy. In fact when we did want to buy something, we occasionally had a hard time getting them to take our money. They willingly pose for photographs, tapping their friends on the shoulders to turn around and join in with cheesy grins. Can you imagine that happening in Borough Market?

The market in Tbilisi made me tingle with excitement. You can really feel the distance from Western Europe. I stumbled through each ramshackle pathway, ducking through doorways and underneath swinging bulbs, eager as a kid in a sweetshop to see what new discoveries lurked in every nook and cranny. There were many: The Georgians are into pickles, which of course endeared me to their cuisine immediately. My favourite and fortuitously the most ubiquitous was this tall tangle of what seemed to be pickled flower stems; the comparison with capers (being pickled flower buds) was a natural one and the flavour was quite similar. Walnuts are grown in Georgia and therefore appear frequently in sauces, soups, salads and most famously, in churchkhela (above); strings of walnuts (and sometimes hazelnuts) are dipped repeatedly in grape must, which is thickened with flour so that it coats the nuts in a slightly sweet, chewy casing. We stumble across a ‘cheese room’ in the market, stacked with sheep’s and goat’s cheeses, both similar in flavour with an additional, heavily smoked variety. The texture is crumbly like feta, and the flavour, incredibly salty – more so even than halloumi. It is addictive, just as anything very salty always is. We later visit a cheese maker who tells us that the saltiness is for preservation purposes. We have some fun trying to translate the technicalities of cheese production from Georgian to English but the gist is that they use rennet from the stomachs of their 500 sheep, mixed with milk and nettles, the latter helping to clean the mixture by catching impurities. The cheese was once stored in shaved sheep skins but is now kept in plastic bags (for obvious practical reasons), where it spends a year before reaching maturity.

In typical Georgian fashion we are greeted with refreshments – a plate of the cheese, plus bread and plenty of wine to wash it down. The wine is most definitely what one would describe as rustic, the kind of wine that a teenager would love; very sweet indeed but somehow absolutely perfect in that time and place, the sweetness perfectly balancing the super salty cheese. We glug down several glasses. Back in the market, carrier bags bulge with heady spices and seeds. Cumin and coriander seem prevalent and I spot nigella seeds, too; unmistakeable black studs nestled amongst the fiery reds of a dozen different chilli powders. The chilli flakes look Turkish so I buy some of those – they come wrapped in a small newspaper cone like fish and chips – plus I take some of the Georgian spice blend which graces the table as a seasoning and tastes like a turbo charged celery salt. Chickens are bright yellow and clearly corn-fed. The other meat we see hangs in a remote market; every stall holder equipped with the kind of axe one would expect to see furnishing the arm of Gimli in Lord of The Rings. The Georgians seem rather partial to offal, too; brains, tripe, snouts, the lot. In my delicate state (read: disgracefully hungover having spent 8 hours the previous day necking wine and grappa-like spirits), I find my usual ox-like constitution compromised and scurry away. Honey is scooped from buckets in huge amber globs, then smeared into old jam jars. Pots of honeycomb are also available, which marked the first but not the last time I cursed my decision to bring a tiny suitcase. Empty soft drink bottles are filled with Georgian table sauce, made from mirabelle plums. The green sauce is sour, while the red sauce, made from riper plums, is more sweet. Both are made by boiling then pureeing the fruit, before adding garlic, coriander, dill and chilli amongst other ingredients. Both are quite delicious, appearing at several meals we enjoy over the course of our stay; the flavour is unique and I’m rather excited at the prospect of attempting to re-create it.

Everywhere we look there are buckets, platters and boxes of ingredients: This is a picture of a Georgian cat because it is very pretty. No other reason. Not for eating. We later visit the flea market in Tbilisi, which proves just as exciting for the cook; silver cutlery, crystal glasses, china and all manner of curious kitchenalia are laid out on the pavements. I once again curse the suitcase, passing up many opportunities to feed my obsession with plates and cutlery. At almost 3 lari to the pound, there were some bargains to be had. My visit to Georgia was led by ‘that crazy French woman’, Isabelle Legeron who organises the RAW artisan wine fair in May. Tickets available here.