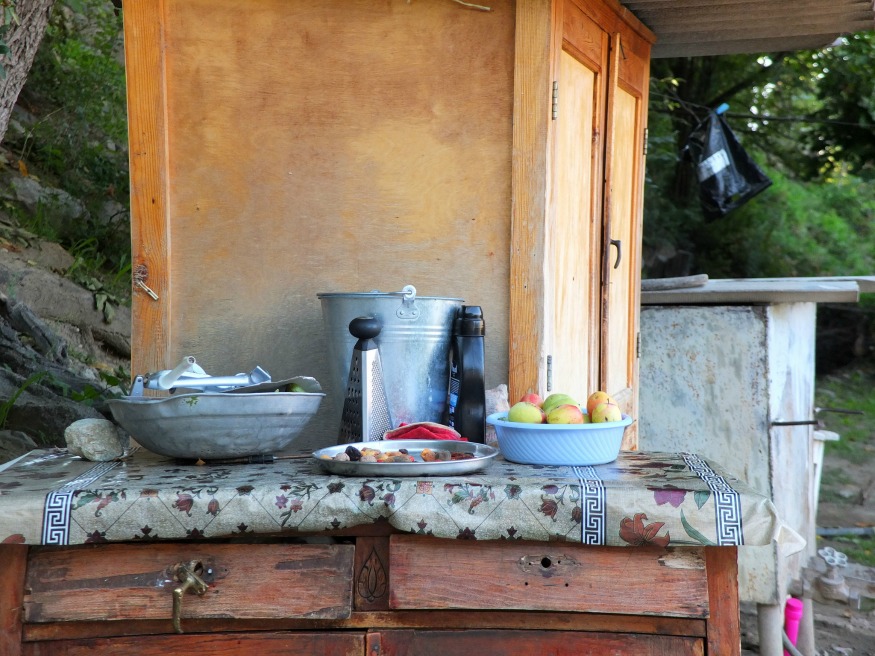 I was motivated to write this by the arrival of Olia Hercules’ new book, Kaukasis, which I am fully obsessed with. You can probably guess that it’s about the food of the Caucasus region and long time readers will know that this is something I am very much into.

Georgia I have written about before. That trip changed my life in many ways and it still tops my list as the most amazing country I’ve ever visited – the food, the people and their hospitality, the polyphonic singing, the near endless feasting. Azerbaijan I haven’t written about here for some reason, and the book reminded me to share some snaps.

I’ve been twice to write several pieces for a Conde Nast magazine called Baku, travelling around a bit each time. Once I wrote about the regional food of Nakhchivan, an autonomous republic, separated from the rest of the country by Armenia. I’ve also been to visit a small Russian enclave called Ivanovka in the Ismailli district and in between spent a bit of time in Baku.

This once-Soviet republic is a fascinating country, full of contrasts, like the beautiful, ramshackle Old Town next to the hideously slick Flame Towers because… oil. There is huge cultural and also climatic diversity, which results in a rich cuisine, influenced by neighbouring Turkey, Russia, Iran, Georgia and Armenia. They are not friends with the latter.

Here are some of my favourite photos and dishes from my time there: 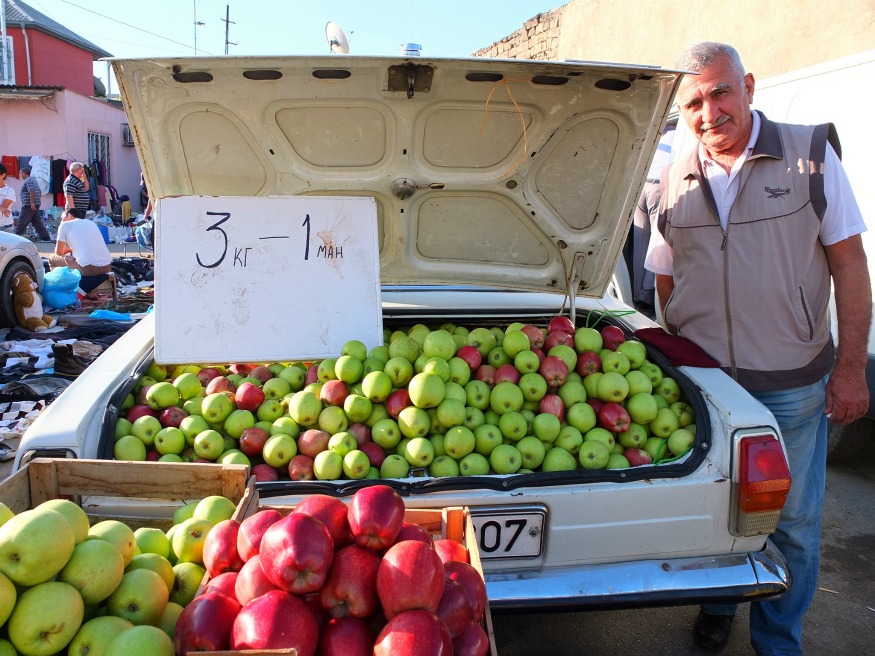 A food market in Baku. There was a large indoor area for vegetables, while the outside was a flea market with lots of kitchenware and Soviet-era items. The stylist I was with bought loads of cast iron Soviet waffle makers for his collection. 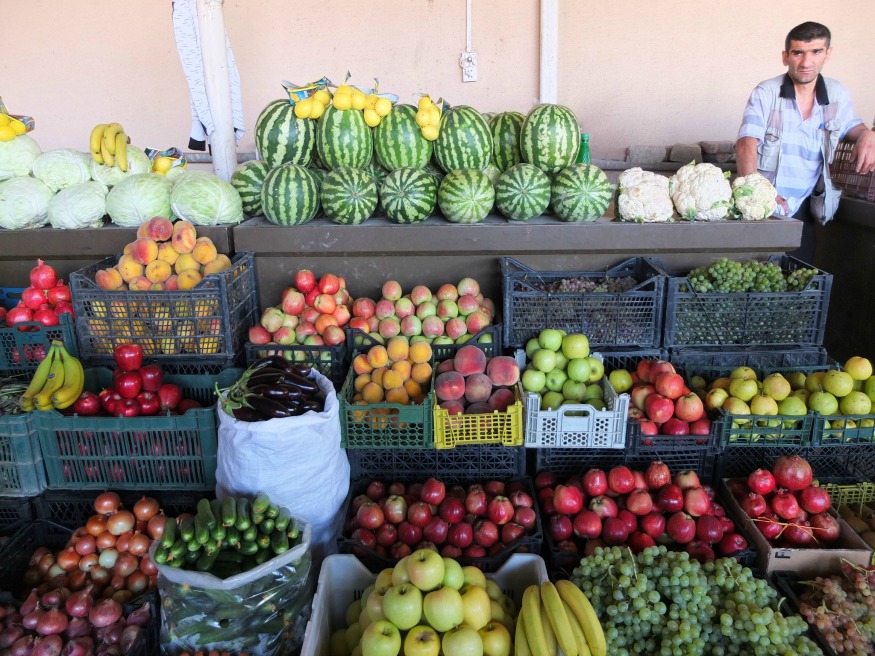 A fruit stall at a market in the mountains in Nakhchivan, a region famed for the quality of its fruit. You can see how carefully the fruit and vegetables are stacked – they are very proud of the produce. Ordubad, a city in Nakhchivan, is known as the ‘pearl’ of the region and their lemons are particularly prized, costing as much as a day’s wage for many local people. They are large, sweet and fragrant. Everyday lemons are imported from Turkey. 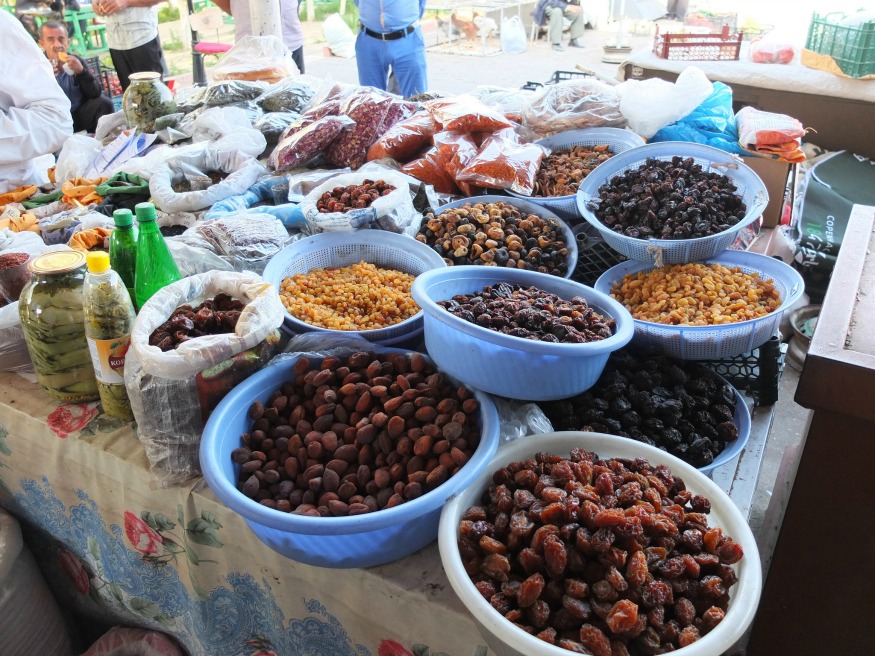 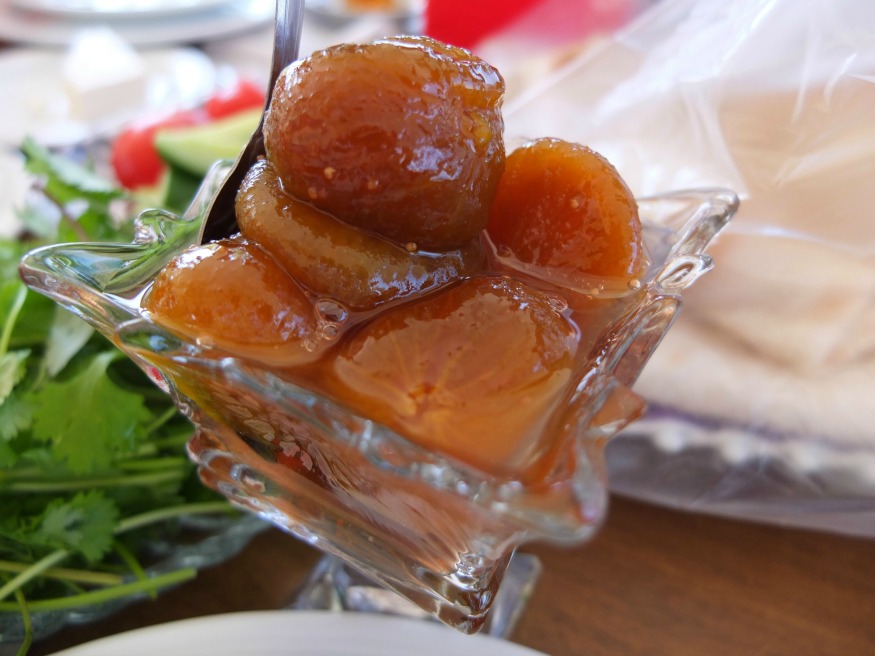 Preserved fruits are also a big thing and appear at the end of every meal in glass dishes like this, at the same time as tea. In fact, any situation which requires tea also requires preserved fruits. Lots of restaurants provide little metal trays with hats on, to keep the wasps at bay (doesn’t work). 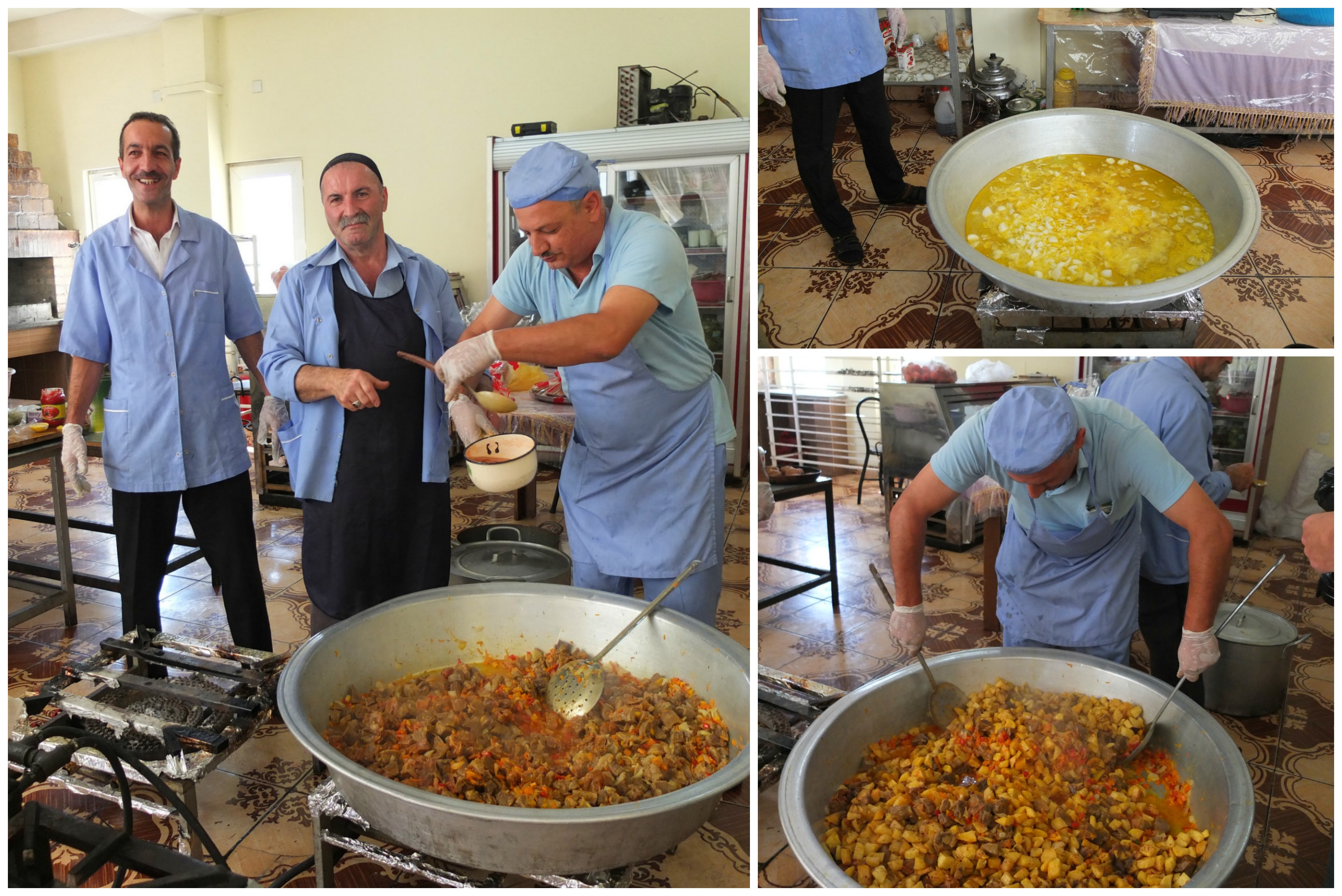 I snuck into the kitchen one day during a shoot to hang out with these guys. You can tell how cheeky they were from the photo… the language barrier was hilarious here but we got by. Check out the size of that pot! They’re cooking some kind of lamb stew with potatoes and tomatoes. Lamb is everywhere in Azerbaijan and the sheep is a significant animal in their history. Later, we see medieval carvings of them outside a mausoleum in Nakhchivan. 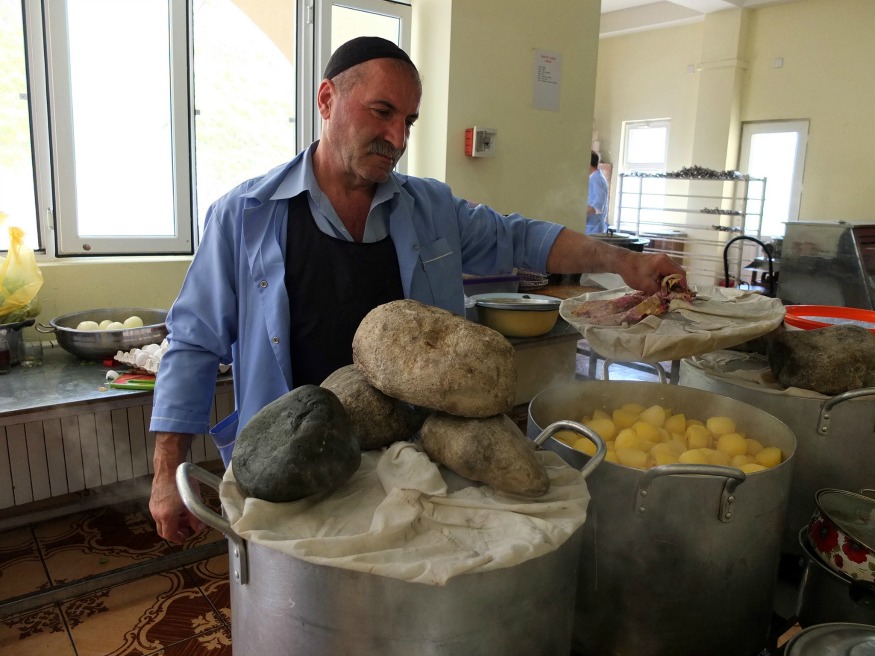 Keeping a lid on the potatoes… 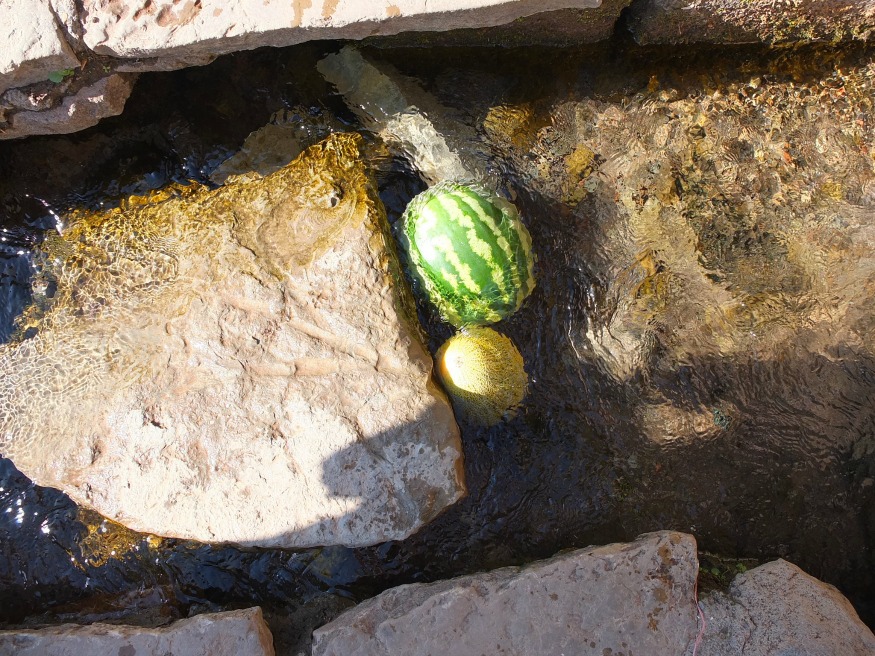 I found these melons when we drove up to a mountain lake in Nakhchivan. It was a hot day so someone had left them to cool in the stream. 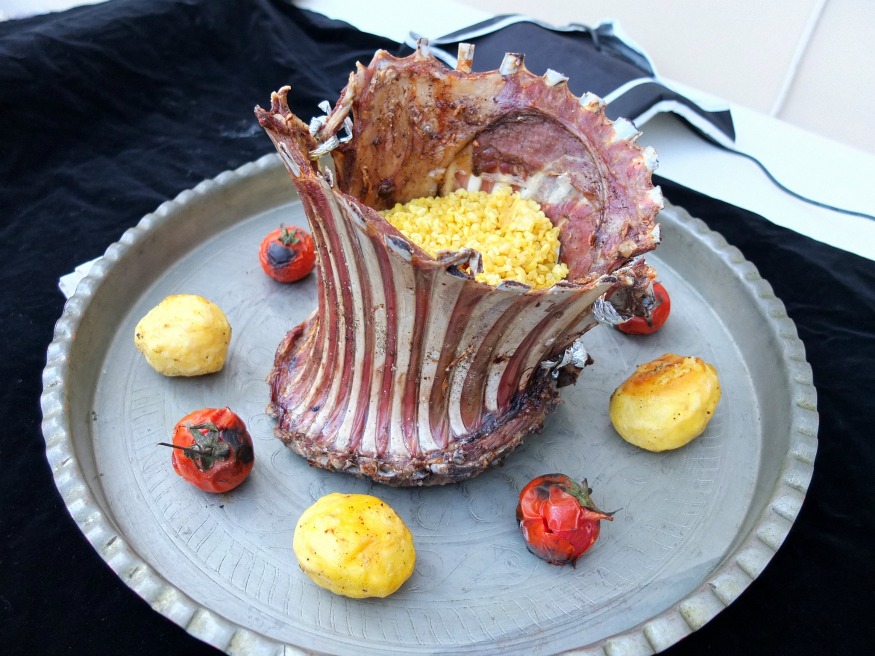 On a shoot for a dish called dadli quala, which translates as ‘delicious fortress wall’. It’s a rack of lamb ribs secured into a crown and filled with bulghur wheat, with the potatoes and tomatoes representing stones in the wall (there would usually be a lot more of them, piled up around the outside). This is a dish for a special occasion. 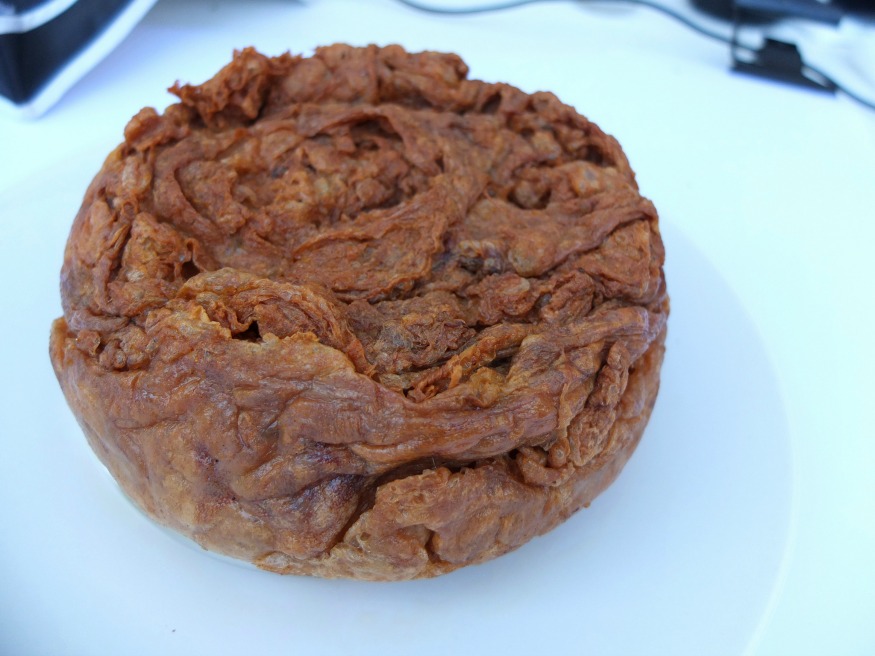 This absolute madness is an Ordubad omelette. It’s a kind of layered ‘cake’ which is made by mixing clarified butter and eggs into a batter and whisking them in a pan until it forms this shape. The whole thing is then covered in honey (the one above is yet to have its coating). They have fantastic, fragrant honey in Nakhchivan, and hives line the roads in the mountains. 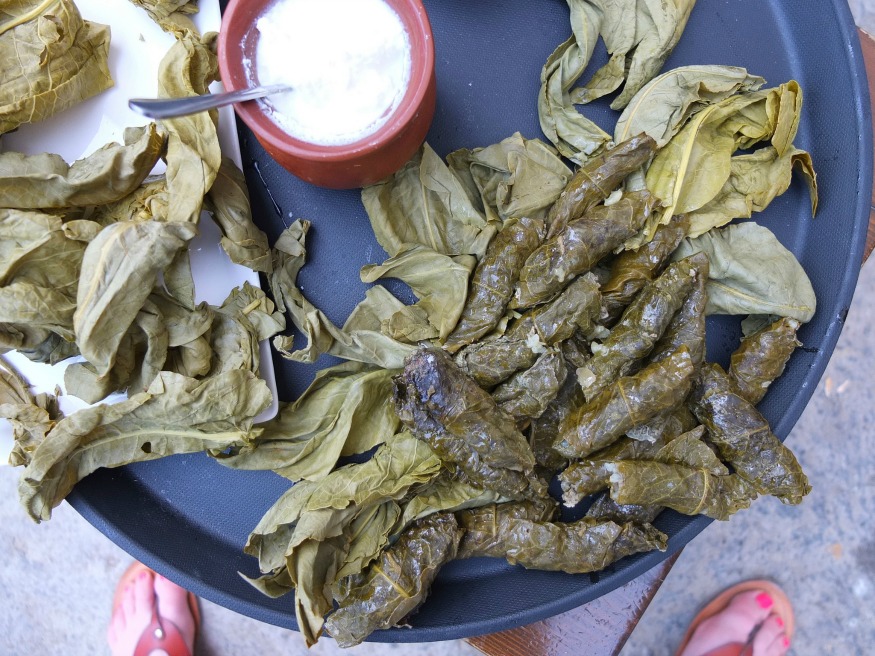 Dolma in Azerbaijan are made with dikcha leaves when they are in season, which are lighter and more readily available than vine leaves. We also had stuffed cabbage leaves and onion skins but these were my favourite, stuffed with the usual rice and a little minced lamb. 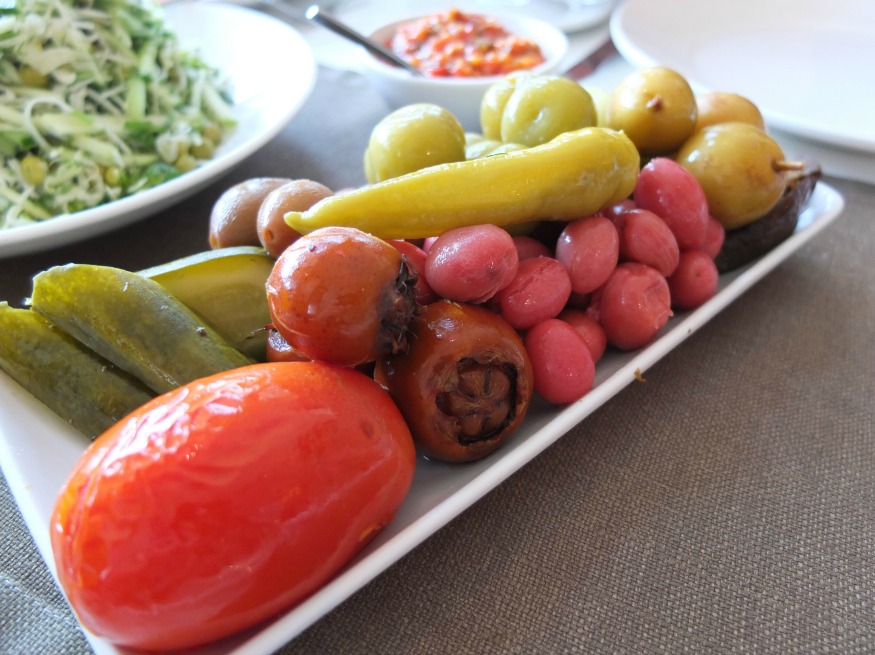 The pickle game is strong. 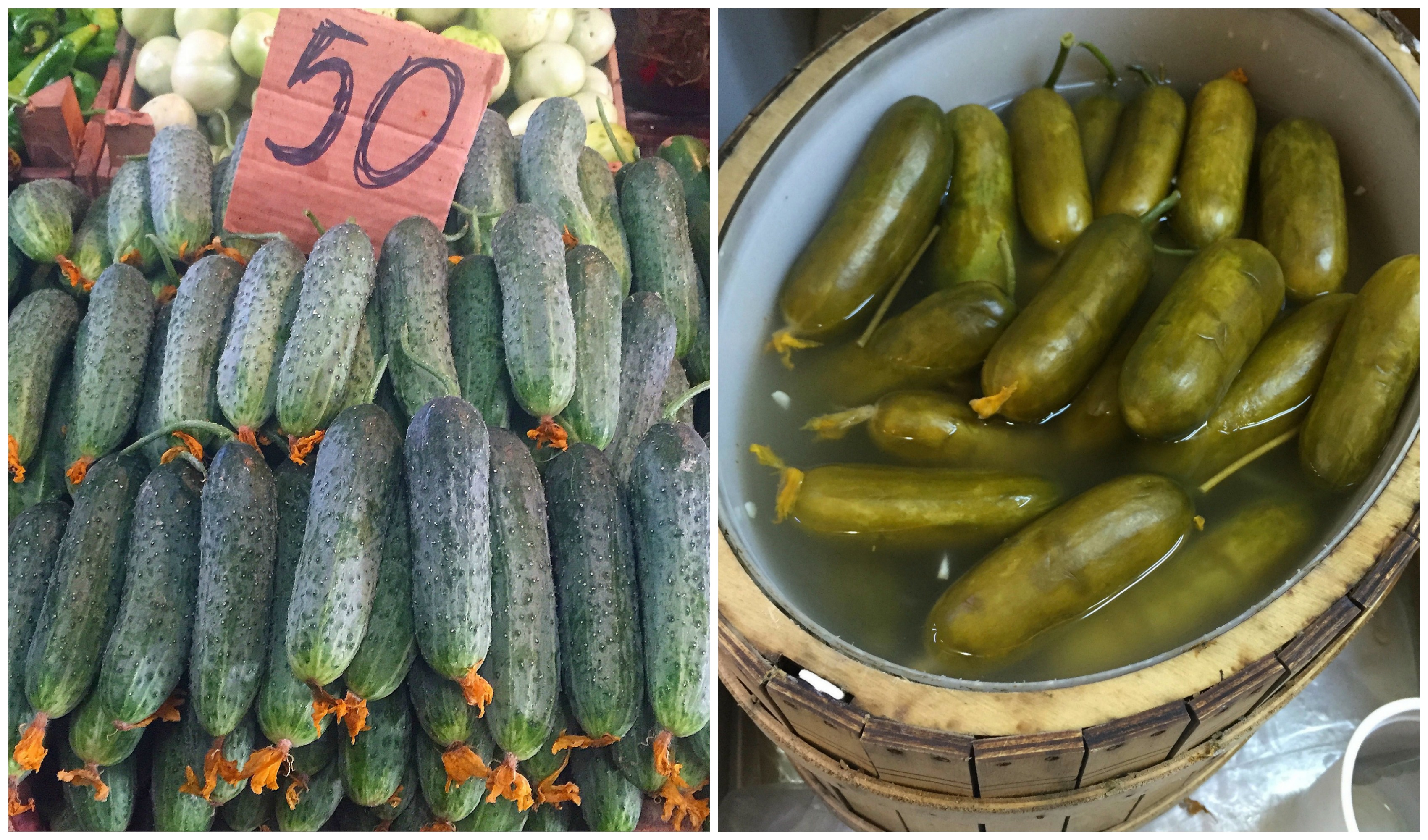 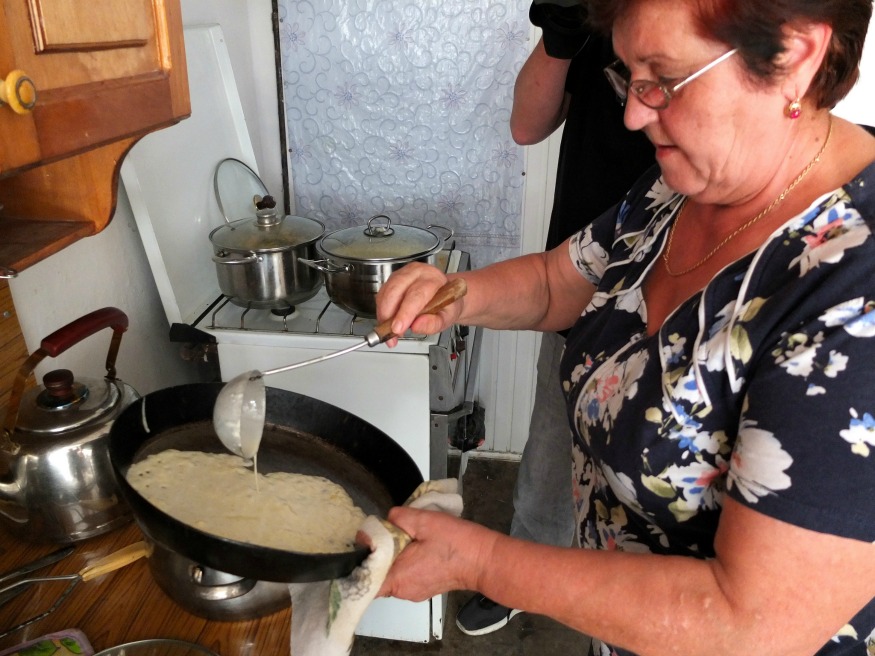 Tatiana Ivanovna Dubrovina, a Russian lady living in the Russian enclave called Ivanovka, invited us to her home for lunch. Here she is making blinis which we ate with smetana (sour cream), made from the milk of the cow standing about 10 feet away. This whole kitchen is outside, in fact. She showed us around her house afterwards, which still had a Russian oven in the centre, used for both heating and cooking.

There were originally just 11 Russians living in Ivanovka, she told me. The population peaked at around 4, 500 and now there are around 3000. It’s home to a religious sect called the Molokans, exiled from Russia in the 19th Century for refusing to conform to rules of the Russian Orthodox Church, particularly rules around dairy consumption during fasting (having tasted the smetana, I can see why). 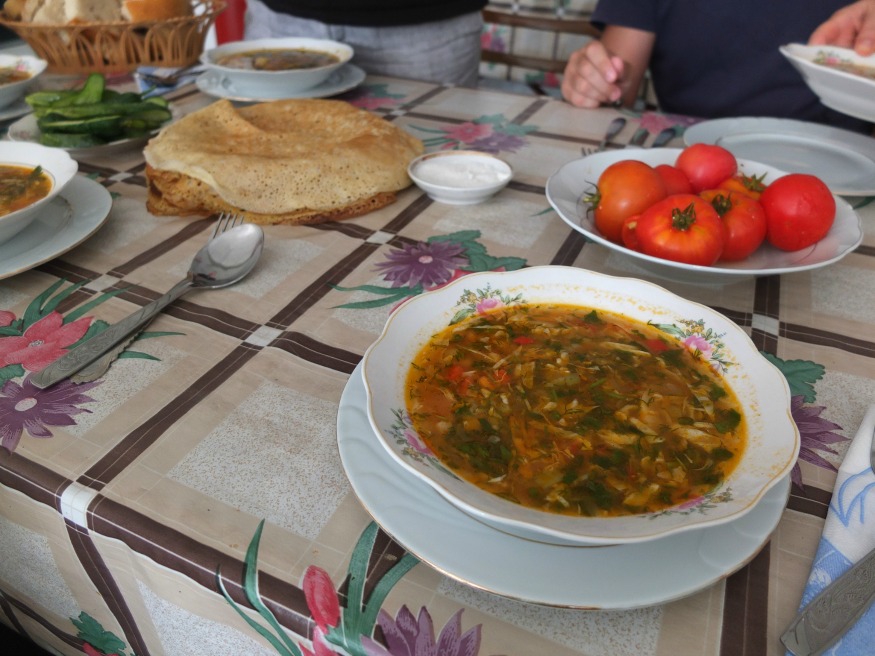 A green borsch made by Tatiana. The soup is made with beef stock and thickened with potatoes. Loads of herbs like dill and parsley are added, plus garlic, dropped in last to preserve its pungency. 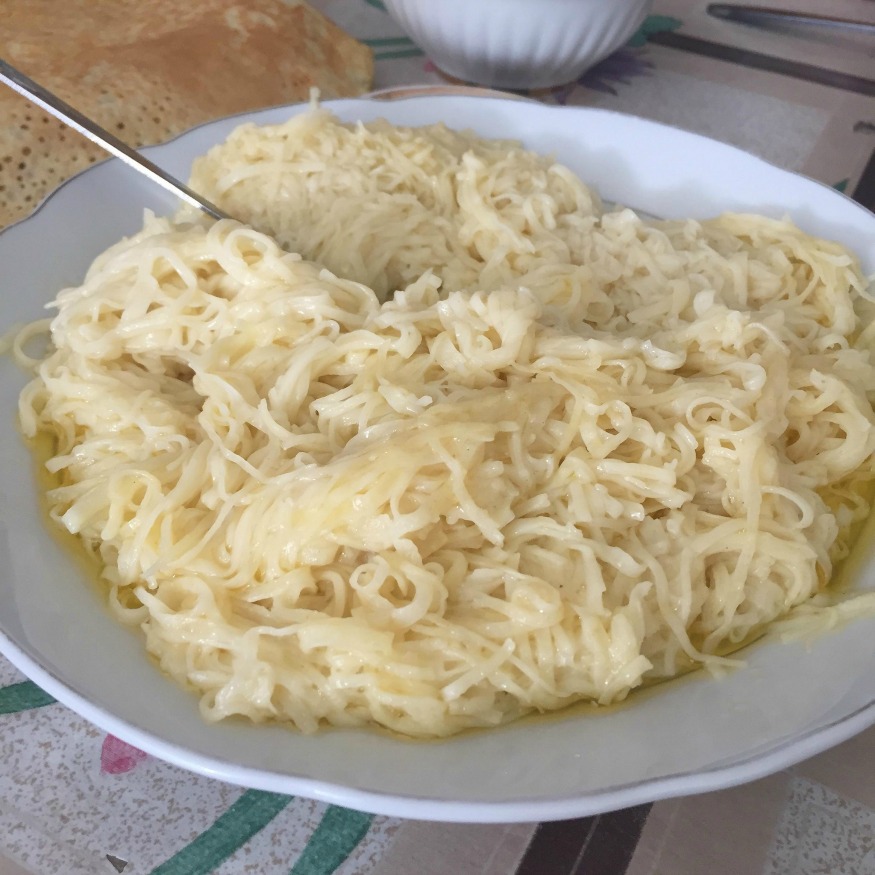 Tatiana’s unbelievably good noodles, which are basically drenched in unpasteurised butter. I wanted to run off with the bowl. 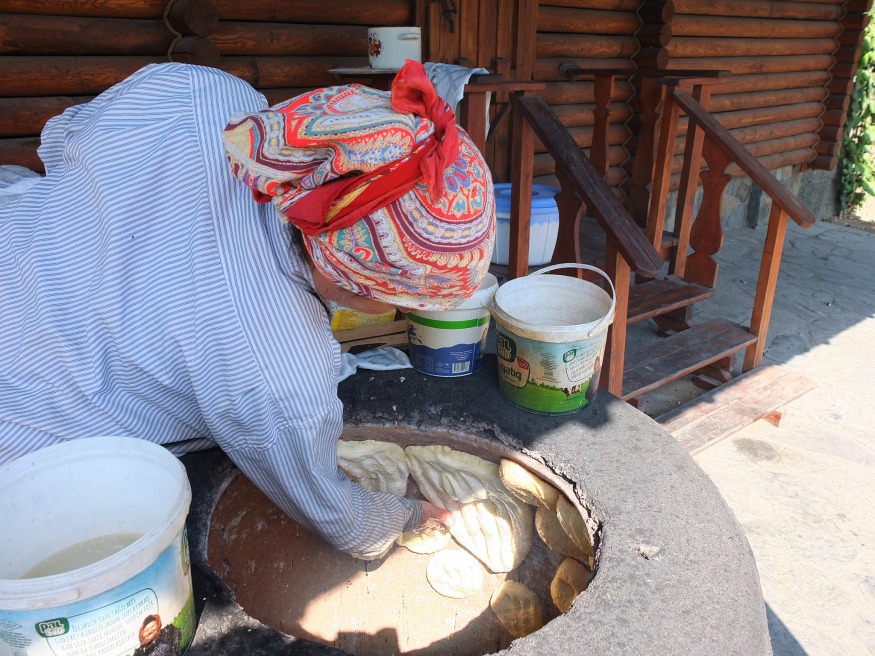 A woman bakes bread inside a traditional oven, in the same way that they make ‘pure’ (pur-AY) bread in a tone (that’s the name of the oven) in Georgia. 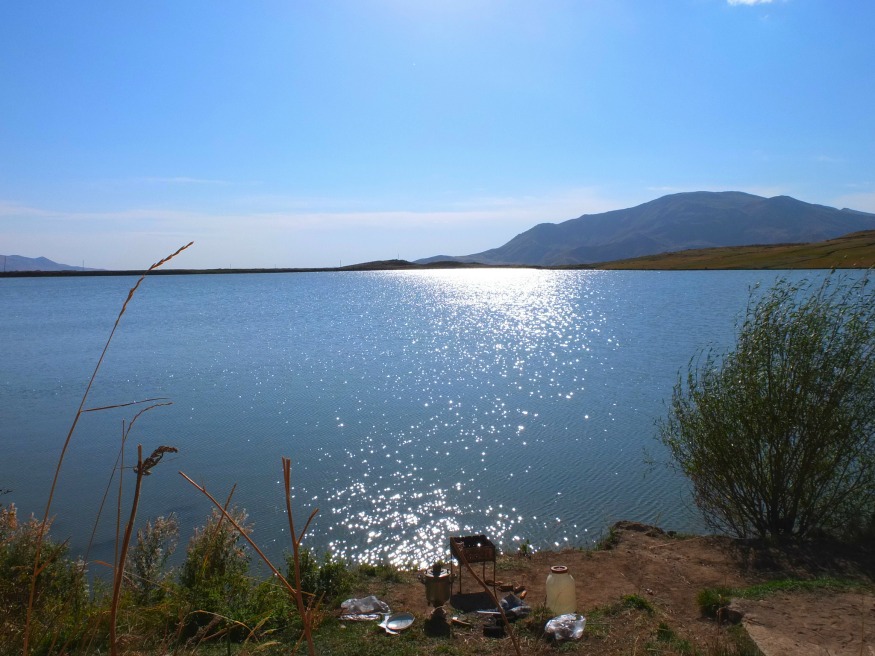 I love this tea urn set up by the lake in the mountains in Nakhchivan. We didn’t get to meet the owner. Presumably, it’s not really a worry leaving your stuff lying around out here… 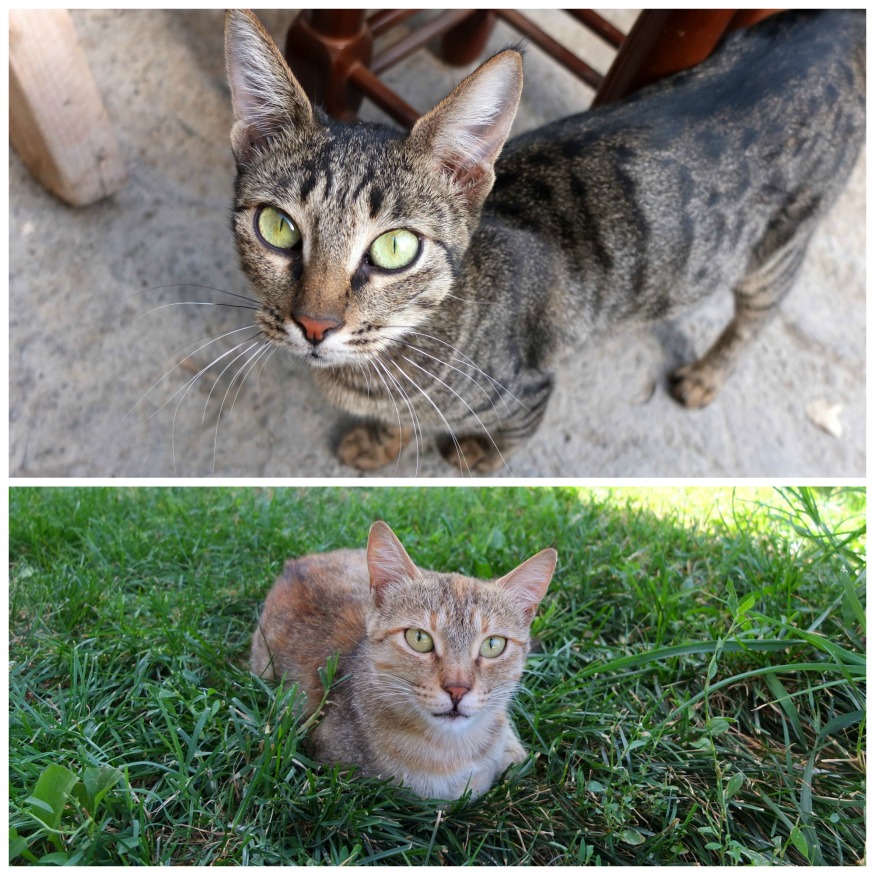 And last but not least: CATS.