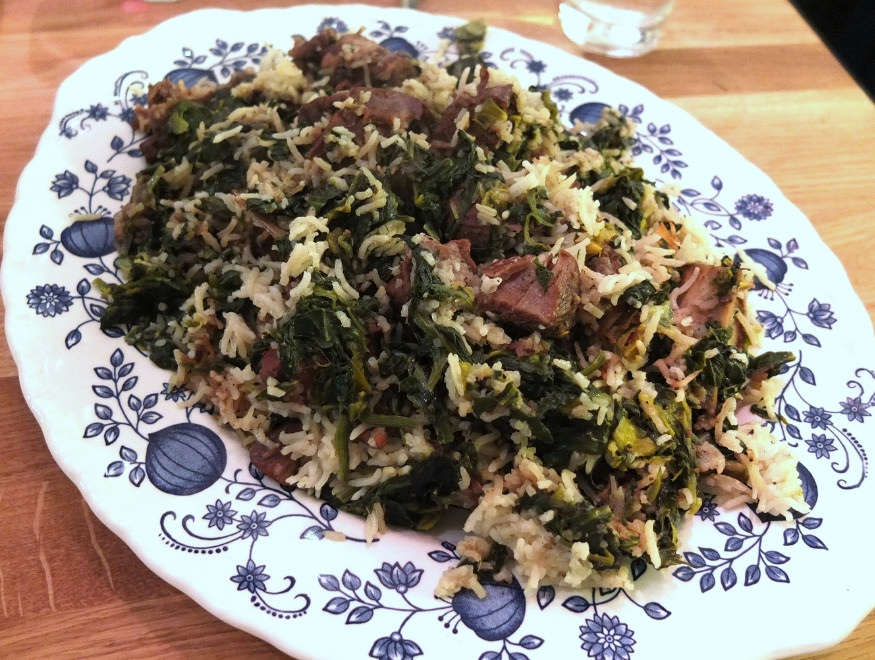 Over the years I have become very interested in the food of Iran, then Georgia, and now Afghanistan. The cuisines all make use of ingredients I am very fond of, such as yoghurt, meats like lamb, fruits such as dates and pomegranate, vegetables such as spinach.

A browse around the bookshelves of Iranian shop/deli Persepolis recently turned up Noshe Djan, an Afghan cook book by a woman called Helen Saberi. Helen has written a cook book of the kind I have increasingly come to love; she married an Afghan man and spent a significant amount of time living in Afghanistan absorbing the culture and cooking the food. She has lived the life of an Afghan and she provides a heartwarming introduction to the Afghani meal time; the book is the kind one can read like a novel. It is genuine, accessible and utterly fascinating.

The first recipe I’ve cooked is the amusingly titled ‘sabzi pilau’ or ‘zamarud’, meaning emerald. I say amusing as every recipe like this, which suggests the main ingredient is a vegetable (in this case spinach), then goes on to specify ‘700g of lamb’ or, often, chicken.

It was bloody delicious, although it did take a few hours to cook. Worth waiting for, but anyone who is making this might want to consider doing it on a weekend. Or perhaps you’re smart enough to just read the recipe properly in the first place, unlike me. We ate at 12.30 am. The spice mix makes this interesting – char masala. It is equal parts cinnamon, cloves, cumin and black cardamom. In other spice mixes the stronger flavours like cloves are generally used in smaller quantities, but not here. I also loved the liberal use of black cardamom which I don’t often see; one of my favourite spices, like giant smoky black raisins.

The final pilau was comforting, with the feel of a biryani. I served it with garlic yoghurt (made by blanching some peeled garlic cloves then mixing with lightly whipped, seasoned yoghurt) and an aubergine pickle, which is also worth mentioning. Small aubergines are slit, and then a whole garlic clove placed in each one; when pinched together they look like mussels. The pickling liquid is simple – white vinegar, sugar and green chillies, nigella seeds and fenugreek, the flavour of the latter being particularly suited to aubergines. It has a sort of intriguing musty flavour which contrasts the acidity. The pickled green chillies are obviously a mega bonus too.

This recipe serves 4, although if you have other dishes too it could easily serve 6-8. I’d recommend eating it with yoghurt on the side. The lamb can be substituted for a whole chicken, jointed.

Rinse the rice a few times until the water runs clear and then soak it in fresh water for at least half an hour.

Heat 75ml oil in a pan and fry the onions in it, stirring frequently until soft and golden. Trim excess fat from the lamb pieces, then add it to the pan and continue frying until the meat is well browned. Add the 225ml water, 1 teaspoon of the char masala and salt and lots of black pepper. Bring to the boil, reduce to a simmer and cook until the meat is tender. This takes a couple of hours, FYI, depending obviously on the size of the lamb dice. It’s nice to have big chunks but if you want it to cook faster, cut it smaller.

Prep the spinach by cutting off any large stalks and washing really thoroughly, then chop roughly.

Heat the remaining oil in a large pan and fry the leeks in it, until they are soft and nearly brown. Add the spinach and continue to fry, stirring all the time. When it starts to wilt down and reduce in size, turn the heat down, cover the pan and cook gently until the spinach is completely wilted down and cooked. Add the ground coriander (or dried dill) and some salt and pepper. Cover and cook gently until all the water is evaporated and the spinach soft.

Bring the 1.5 litres of water to the boil and add a teaspoon of salt. Drain the rice from the soaking water and add to the boiling water. Cook for 2-3 minutes, then drain and add to a casserole dish with a tight lid. Add the spinach and meat along with approx 175ml of the juices and the other teaspoon of char masala. Mix this together gently but thoroughly. Put the green chillies on top of the rice. Cover the dish and put it in the oven for about 45 minutes.

After this time, remove the chillies from the top of the rice. Serve the dish on a large platter. As I said, I like it with yoghurt, which I mixed with crushed garlic that had been blanched in boiling water for a few minutes. Garnish the dish with the chillies.

This works best with baby aubergines. Helen says that if you can’t get them you can use regular aubergines too, diced. In that case just chuck the garlic cloves in to simmer with the diced aubergine.

Slit the baby aubergines lengthways to the stalk, but don’t separate them. Put one peeled garlic clove inside each as per the picture above.

Fill a saucepan with water and bring it to the boil. Add the aubergines. The water should cover them. They will bob up to the top during cooking, when you will need to push them down again. Inevitably some of the garlic cloves will pop out – don’t worry about it, you can fish them out afterwards.

Simmer gently for five minutes then remove the garlic and aubergines with a slotted spoon. Keep the cooking water. Once they are cool enough to handle, put a layer of aubergines and garlic in a large jar, followed by a layer of chillies and repeat until both are all used up.

Mix together the vinegar, sugar, salt, fenugreek, dried mint and nigella seeds plus 150ml of the cooking water. Pour over the aubergines. Seal with a lid.

I ate mine after about 3 days and they were lovely. Helen doesn’t specify how long they should be left before eating.